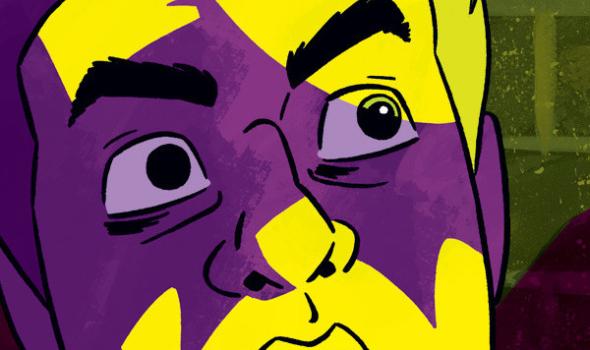 Adam Caldwell‘s graphic novel series Blood Blokes is a refreshing read, at once reinforcing familiar vampire tropes while resetting it in the slacker genre. Set in the early 21st century (issue #1 takes place New Years’ Eve, 2000), the series follows Vincent, a twenty-something living in Manchester. After arbitrarily quitting his movie theatre job, and being broken up with by his girlfriend Jane, he is attacked and bitten by a bat. Believed to have died, a funeral is arranged for him, and after a three days, he wakes up to find himself in the communal home of Douglas, Arianna, and Mike. As Vincent begins to understand his new situation and environment, a mysterious bald stranger comes into the picture, trailing Vincent’s new friends and, presumably, putting into potion a whole slew of problems.

The first four issues are an interesting read, at once a reflection of modern vampire tropes (the main vampire characters can remain in sunlight for limited amounts of time, and can survive if covered up well enough), as well as a reflection of millenial uncertainty. Vincent is a veritable man-child: impulsive, self-centered, and irresponsible. He quits his low wage job arbitrarily, and overreacts to his girlfriend’s suggestions that he apply himself and go back to school. The details of his life—the décor of his room, the low-level job he occupies, his tendency to overreact emotionally—these are tangible facets to which any twenty-something can relate. He lacks ambition, if not drive (before remembering to meet up with Jane on New Years’ Eve, he spends hours playing video games by himself), and seems to coast on through life. Mind you, all of this character development occurs within ten pages of the first issue, and it is so seamless and perfect and works so well.

While the vampire genre (and, to an extent, the zombie genre) seems so over-saturated as to be boring, Blood Blokes more than excels at creating realistic, distinct characters, if not adding something unique to the genre. The well-established tropes are here: vampires must drink blood every 3-4 hours. There is a thriving vampire underground community in Manchester (and, presumably, throughout the world). Vampires try (and train) to hunt humans in order to avoid killing unless necessary (although Vincent fails at this during his first foray hunting). Vampires burn in sunlight (but can survive with enough clothing and protection. All of the basic facts are set up very quickly, and Cadwell assumes that readers understand and are familiar with the basic tropes of vampire stories; this is a refreshing move, as he is then able to move right into the story and further develop his characters.

The characters are each well developed, and distinctly designed, making each a unique individual. Vincent is the everyman and main character; Douglas is the older, mysterious, stoic, more stereotypical “goth” leader of the vampires, extremely pale, speaking in plain monotone, and with hair styled like shark’s fins; Arianna is the bohemian type, very quiet and to-herself, and who may harbor the faintest of feelings for new vampire Vincent; and Michael is the long-haired, pop-culture loving hipster vampire, a bit geeky and visually reminiscent of Christopher Minz-Plasse, or even a young Robert Carradine. This ragtag group of outsiders, as disparate as they are, come together as a common breed, and although it is odd, in issue three, to see Douglas sitting back at a bar with the group, they do seem to get along well enough.

To Cadwell’s credit, all the characters are interesting and well-established enough to warrant revisiting and getting to know them. And, thankfully, the comic is punctuated with humor, both light and extremely dark (issue two opens with Vincent being “rescued” from his own cremation by Douglas and Michael, who interrupt his undertaker having a “tea party” with Vincent’s corpse, and that of several other bodies; issue four ends with Douglas teaching Vincent how to hunt, and, upon instructing him to “watch out for the jugular”, watches as Vincent bites directly into it, spewing blood everywhere. Touches like that add a much needed hint of levity to what could otherwise be a rote and self-serious comic). It is a delight to read the interactions between Vincent and his new group. 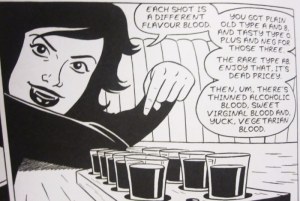 Arianna, demonstrating a bit of the series’ dry humor

Of the few complaints, the only major gripe is Vincent’s seemingly easy transition between being alive and being undead. Little time passes between his “death” and his meeting his new group of compatriots, with even less of a transition. One would think a bit more time and effort would be needed between being dead and encountering a strange group of vampires, but within the comic’s timeline, less than a week goes by before Vincent is chummy with his fellow vampires, and trusts them a bit too easily. While the story itself hints that some characters (Douglas, particularly) have some sinister motives, and that the world of vampires is much larger and more dangerous than it at first seems, it seemed odd that Vincent would not have the same inclinations. But, aside from that, everything else about the story and characters works in spades.

The art is in rich black and white, with spreads presented two or three pages after the title page. The spreads are rich in detail, often reciting the lyrics to a song (The Beatles‘ “Here Comes The Sun” opens the first issue), and giving not only a sense of relation between characters, but also between locations. The fictional Manchester is richly detailed, and beautifully rendered. Each panel is likewise impressively rendered, bathed in rich shadows and thick outlines, and sometimes featuring characters in silhouette and silence.

These moments help create a distinct, purposeful tempo to the story. Everything about Blood Blokes is deliberate and takes its time to unwind. It is allowed to breathe, and each panel is packed full of little details that enrich the world. Similar sentiments go to the script and dialogue, which has a great touch of Irish idioms; while reading, it is hard not to hear the accents for each character. 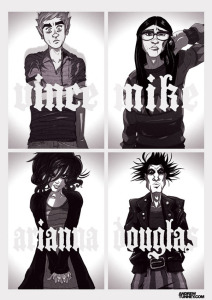 Having read the current issues three times through, the anticipation for the continuation of the story is palpable. Cadwell, again, has hinted at a much larger and dangerous world out there for Vincent and his friends to navigate, as well as some personal stakes being hefted between Vincent and Jane. Hopefully Cadwell is able to continue the momentum and terrific start to this series, as Blood Blokes is a fun, new addition to the vampire genre.

Are you ready to discover the seedy vampiric underworld of modern-day Manchester in Adam Cadwell’s Blood Blokes? Sound off in the comments or send us your thoughts on Twitter!