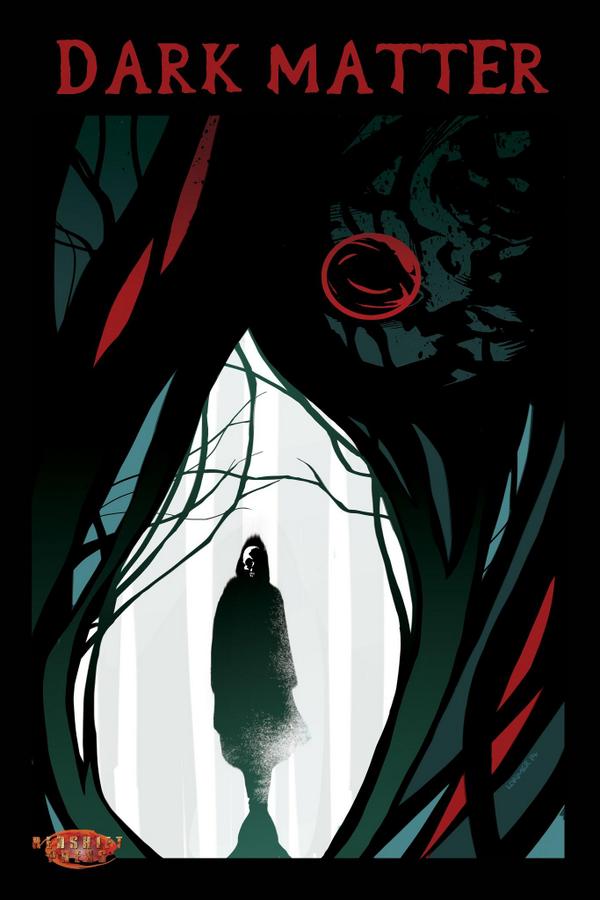 Dark Matter, an anthology series written by Chris Sides and published by Redshift Press, is a perfect addition to the late-October and Halloween festivities. A series of nine vignettes, the comic reads more as a shorthand Twilight Zone or Outer Limits in graphic novel form than as a single storyline, and is greatly enjoyed as such. Each story is moody and ominous, and while some stories feature impressive visuals, others are lacking in that department. Thankfully, what the vignettes may occasionally lack in visuals, it more than makes up for in mood.

Of the nine stories, the most impressive (in regards to successfully balancing mood, writing, and artwork) are “Cold Caller”, “Passenger”, “TG92ZQ==(LOVE)”, “Black Earth”, “The Departure”, and “Run”. By that listing, it is clear that the anthology has many more stories that succeed than those that fall flat. Both “TG927ZQ==(LOVE)” and “Passenger” are illustrated by Chris Travell, who employs a photo-realistic approach to his artwork. “TG927ZQ==(LOVE)” is lusciously coloured and shaded, creating a very moody, neon futuristic world in which androids have learned to love humans; “Passenger” creates a foreboding sense of dread with Travell’s use of black-and-white, and gorgeous shading, which casts an undeniable aura to the story of a couple’s “hauntings” by an elderly woman who only says “Police!” Sides’ writing for both these stories end on a whisper, rather than a shocking twist, but even that whisper is chilling and implies a lot. 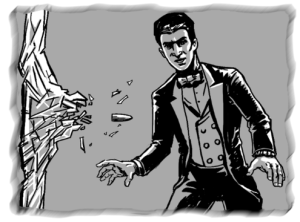 A magician contemplates his illusion

“Black Earth”, drawn in an equally bleak, minimalist style by Mahmut Dervish, recounts an elderly couple’s simple survival in a post-apocalyptic wasteland. “Cold Caller”, drawn in a similarly photo-realistic, black-and-white approach, by Dean Sanford, is the most dynamic visually, employing a series of POV, oblique angles, and interesting shading to propel the story of a telemarketer driven to near-madness in an attempt to sell to a client and keep his job. Of every story in the anthology, it struck a chord due to its plausibility (although it is a tenuous plausibility) and relative sense of desperation (living through a recession would certainly drive anyone insane). And of all the stories, the “Departure” is the shortest, but no less effective: Freja Steele paints a multicolored, dream-like portrait of a scientist embarking on a trip to the future, and her eerie warning to herself. Short, sweet, and effective. 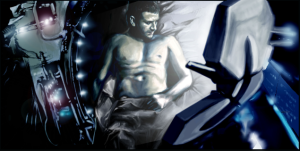 An android ponders the mystery of “love”

Less effective is the story “Some Words Of Advice”, with its garish, harsh illustrations that leave a considerable amount to be desired. Unfortunately, Ashley Hewerdine’s artwork actually detracts from Sides’ writing, which is quite amusing and concerns a young man’s conversation with his future self, and his following through with some not-so-sage advice and the repercussions therein. It is perhaps the most disappointing story simple due to its garish, slightly amateurish, and flat artwork. There is little depth and inconsistent sense of proportion, although it was easy to see what Mr. Hewerdine was attempting to achieve. The writing made the vignette worthwhile, but hopefully Mr. Hewerdine proves more impressive in future works. 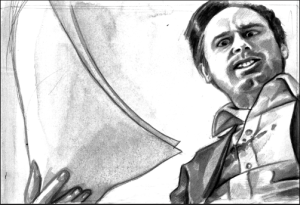 “Cold Caller’s” protagonist, down to the wire…

“The Caretaker”, concerning a guilt-ridden man’s visit to the scene of a past tragedy, fares a bit better artistically. Once again, Freja Steele provides the artwork, although here it seems there are problems with proportion, and suffers from feeling a bit flat as well. The coloring and use of shadows is impressive though, although the denouement fell a bit flat.
For a quick, introspective and moody read, Dark Matter will do the trick, and while some stories fare better than others, there’s definitely enough to warrant checking it out and where one story might falter, another will succeed.

Do you have any favourite Halloween-themed, or anthology stories?
Sound off in the comments or send us your thoughts on Twitter!