Home » REVIEW: Bertie Bear and the Dagger of a Thousand Souls Issues 2 & 3 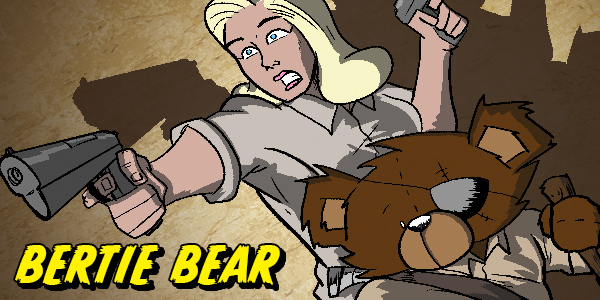 It is rare these days that I myself write reviews of comics, especially now that AP2HYC has an abundance of super writers. So the fact that the Editor-in-Cape is doing this review should alert you at once to the high quality of the comic at hand.

I was first introduced to Andy Clift‘s Bertie Bear and the Dagger of a Thousand Souls two years ago when we reviewed Issue 1. I read the first issue after the review was already assigned, and was hooked immediately. The concept is at once hilarious and violent, with just the right amount of cartoony-ness.

Bertie is, as his name suggests, a teddy bear. Well, that’s not really fair. Imagine if Indiana Jones was a vampire hunter with an eyepatch of badassness on par with Nick Fury. As a teddy bear. That should give you a good idea of what to expect from Bertie. Like Indie, Bertie is an archaeologist, well, more monster/treasure hunter, currently in pursuit of the titular Dagger of a Thousand Souls on behalf of the American government. Unfortunately, some vampires want it too.

When we last left our hero in Issue 1, he had unknowingly boarded a plane full of vampires eager for his blood (yes, Bertie bleeds blood, not fluff; we’ve been over this). Anyway, after a slick opening, Bertie and FBI Agent Alice Evergreen continue their investigation into the Dagger of a Thousand Souls with a visit to Dr. Sommer, an old friend of Bertie’s and expert on Mayan history. Clift manages to keep what is essentially several pages of exposition interesting by keeping the dialogue snappy and the artwork expressive and dynamic.

Issue 3 then picks up with a flashback to the time when the Dagger was entombed and the origin of the secret sect devoted to protecting it. We then return to the present (well, past, the story is set in the 1930s) as Bertie and Alice make their way through traps and puzzles to find the tomb. My favourite line of the book comes at this point when Bertie quips “Awww. Moving spike walls of doom. Now this takes me back.” The scene ends with a fun subversion and as a whole perfectly encapsulates Clift’s humour.

At times, I felt that the pacing of this third issue slowed down the overall story; while fun, the journey through the tombs doesn’t add much to the plot. However, since Clift has decided to turn the story from the planned 3 issues to 4, it makes sense to use the penultimate issue to build excitement. Indeed, the third issue ends on quite the dramatic note and promises quite the climactic finale.

As ever, Clift’s artwork has just the right amount of cartoony goodness to maintain a light tone, which is quite welcome considering we’re dealing with vampires and death cults and such. The use of splashes of red in an otherwise black and white world is done deftly and sparingly, giving it the right kind of impact when it shows up. I also enjoyed the “rack focus” used to imply depth as well as his use of silhouettes and shadows.

Bertie Bear Issues 2 and 3 proved to be just as much fun as the first issues and I look forward to seeing how the series finishes.

You can find the entire Bertie Bear series on Comixology. For more about Andy Clift, visit his website. And, if you’d like to receive an exclusive Bertie-inspired Avengers wallpaper, sign up for our digital calendar here!