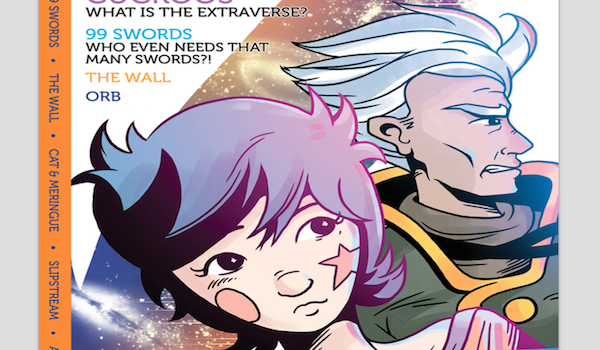 If there’s one thing I enjoy about indie comic companies, it’s the fact that they always go above and beyond when providing entertainment for their fans. Big Punch Studios and its latest publication, Big Punch Magazine, are no exception.

You may have heard of Big Punch Studios or some of its leaders in previous posts on this site. You can find our interview with writer Jon Lock here, and check out our reviews of his other stories Afterlife, Inc. and The Heavenly Chord. Together with his cohorts, artist Nich Angell and writers Alice White and Lucy Brown, Lock has recently produced the first issue of Big Punch Magazine, a collection of independent stories that combine impressive art-work, unique plot-lines, and compelling storytelling.

The first story, Cuckoos, revolves around a group of adventurous misfits who find themselves dashing between the multiverse (or rather, the Extraverse) on their ship, the Reflektor. The first thing I noticed about this story is how the artwork is very reminiscent of classic manga styles. Even the characters themselves felt like they were inspired by characters from anime cartoons. This isn’t a bad thing at all; I actually enjoyed it. This may sound strange, but that type of artwork actually helped immerse me more into the story. I could almost hear the way certain characters talked and interacted with each other because of the liveliness in their artwork. My only real problem with the story was that a lot of stuff seemed to be going on at once, and I had to go back to re-read it to get a better understanding of what happened to whom. This could just be me, but it felt a tiny bit chaotic with everything going on. Other than that, it was a great story filled with massive potential. Hell, I’d most likely watch the anime if it ever made it to TV.

The next story in the issue is Orb, which tells of an alternate version of Earth where humans have made First Contact with a higher dimensional being called the Absolute whom they consider a god. Our protagonist is a woman with certain magical gifts called “manifestations”, or prophetic foresight, which she uses to investigate strange paranormal activity occurring in Antarctica. She stumbles upon another Absolute and makes Second Contact, and that’s when things seem to take a turn for the worse.

The artwork in Orb isn’t as impressive as Cuckoos, though it’s still pretty damn good. The use of colors (or lack thereof) and thin outlines is reflective of the bleak, nigh-apocalyptic setting of the overall story. My small gripe with the plot is that, once again, I needed to go back and re-read it to fully understand what happened. I wasn’t sure if the story was taking place during First Contact or Second Contact with the Absolutes. I also didn’t understand the manifestation concept until my second read-through. Then again, I might just be over-thinking it. It’s a story that has an interesting premise, and could possibly attract a cult-following, but it wasn’t for me.

My favorite story out of Big Punch Magazine has to be 99 Swords. This tale is like a mix of this old webcomic I used to read called A Modest Destiny, The Evil Dead, Discworld, and a touch of Xiaolin Showdown. Weird combination, right? That’s what makes it so great! The story tells of a legend where a swordsmith created 99 magic swords that were some of the deadliest weapons in existence. The legend also goes on to explain how anyone who gathers all 99 swords will have access to the 100th blade and will wield the ultimate power. Naturally, swordsmiths all over the world are on a quest to collect their swords.

Our journey begins with young Elsie Blackwood as she stumbles upon the Man Sword, a sentient weapon and number 99 on the list of enchanted swords. Elsie crosses paths with Tyler Goldensheath, professional swordhunter and wielder of the Gold Sword.

The artwork is lighthearted and colorful, the characters likable and funny, and the setting imaginative and engaging. Tyler Goldensheath immediately struck me as a medieval Ash Williams from The Evil Dead with his douchey and boisterous attitude. I thought the sentient Man Sword was a nice touch and he reminded me of the babbling, cartoony sidekicks from Disney films. It’s been a long time since I’ve actually laughed out loud while reading a comic, and the Man Sword did just that for me. Way to go, Big Punch Studios!

Although it wasn’t as funny as 99 Swords, Cat and Meringue, a brief web-strip featured in Big Punch Magazine did make me smile. It’s a pretty simple concept: a talking cat and a living meringue are two buddies sharing witty observations and funny anecdotes. It takes less than a minute to read and acts as a nice break in between stories in the publication. Picture it as a funny commercial during your favorite show; a small, fun tidbit to give your mind a break.

The final story is called The Wall, and it takes place within an enclosed city called Prizm where crystals fall from the sky like rain. Young acrobats called Catchers patrol the skies and collect these crystals to prevent them from harming the city or its citizens. The main character, a girl named Cyanne, plans to use the collected crystals to finance an adventure beyond the Wall that encases the city so that she can find her long-lost brother.

Just like with Cuckoos, the artwork and story reminds me of anime, especially the concept of the Wall itself, which seems similar to the enclosure mentioned in Attack on Titan. The story looks like it could really pick up in the next few episodes, though this first issue was not bad at all. The concept of the Catchers was neat; it seemed like it would be a cool side-mission in a video game. I’m hoping this concept ties more into Cyanne’s adventures beyond the wall.

That about sums it up for Big Punch Magazine. It’s an affordable and enjoyable quarterly subscription that is easily worth more than what you pay for. I could go into more detail about all the features on the website as well, but I only have so many words that I can write! Why not head over to http://www.bigpunchstudios.com and see what all the fuss is about for yourself?

If you’ve already picked up your subscription, what did you think? Let us know in the comments or on Twitter!