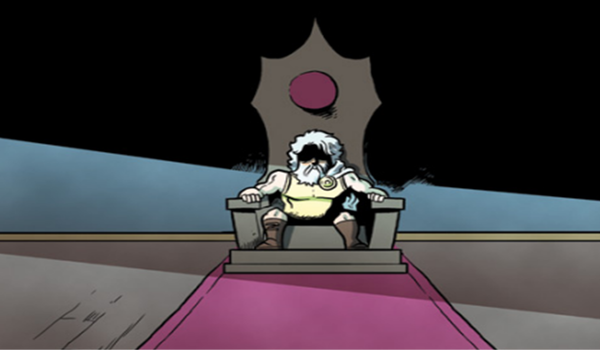 Previously, we reviewed the first two parts of the miniseries Holy F*ck created by Nick Marino and Daniel Arruda Massa, a hilarious action parody starring a buff gun-toting version of Jesus going up against Zeus and co. in a battle for the Earth. The first two issues were fun, exciting and a little bit cheeky at times, and the last two issues continue the trend of making light fun of certain aspects of religion and culture in general. In the previous installments, Jesus is informed Zeus, Isis, and other ancient gods plot to invoke the apocalypse and then save the world through fear and worship, so he teams up with a nun Sister Maria, and your friendly neighbourhood Satan to save the day. The comics’ covers were drawn by Kaylie McDougal.

The story continues with Jesus and Satan rescuing Sister Maria from Zeus and Isis, but end up crashing Satan’s stolen spaceship in the Sahara Desert. Jesus and Satan are keen to pack the hero work in, but Maria refuses, not wanting to live in a world where she has to worship a god through fear rather than love as she states to Jesus, which sounds a little topical considering what a lot of people say or do in the name of God.

Meanwhile, it turns out Zeus and Isis have made their intention to destroy the world completely public, and it is being funded on Kickstarter. And then they go on a chat show with the creepy-faced “Helen DeGenerate” who announces the campaign has been successfully funded, the weird-looking audience cheers, and Isis dances onstage with Helen while Zeus just sits there like “What the hell?” The Gods fire the nuclear missiles to wipe out mankind, but Jesus skydives in and manages to start destroying missiles by giving them a workout, and the final battle comes.

I’d like to praise the comics for the characterization of Jesus and the Gods. There has always been a distinction between the deities – Jesus is a benevolent, selfless person while all the other ancient gods like Zeus are destructive, selfish, and have human needs. While Zeus remains pretty much the same, he is somewhat doubtful that his plans will work and it becomes increasingly more obvious how unsure of himself he has become. Jesus is portrayed as a flawed character, doing the things that are normally condemned by Christians, but he seems to have no qualms with sleeping on both sides of the barn door. Well, he was always meant to be an all-loving person. Satan doesn’t really do much in the last two issues, though his spaceship returns to lend a hand. Sister Maria is pretty kickass, being a very determined character and surprisingly handy with firearms despite being a nun.

Like the first two issues, the third and fourth have very good artwork, with bright colours and a cartoonish-style. I laughed when Jesus is struck by lightning and you see his outline, then in the next panel he is on fire but looks fine. There are some good uses of light and dark, which can help reflect a character’s mood, such as Zeus when he realizes he has lost. I enjoyed the humour in the issues, keeping up the light-hearted comedy without any intended harm. The scenes with “Helen DeGenerate” are brilliant and very amusing, mirroring just how people would likely embrace the apocalypse – something Tomorrowland has recently commented on.

Holy F*ck is a parody, but surprisingly has a lot of heart and cultural commentary in it, and I praise the writers for their efforts. It is very funny and entertaining, and I highly recommend it. There is a sequel hook at the end of the fourth issue, and the co-creators will release the sequel, Holy F*cked, later this year.