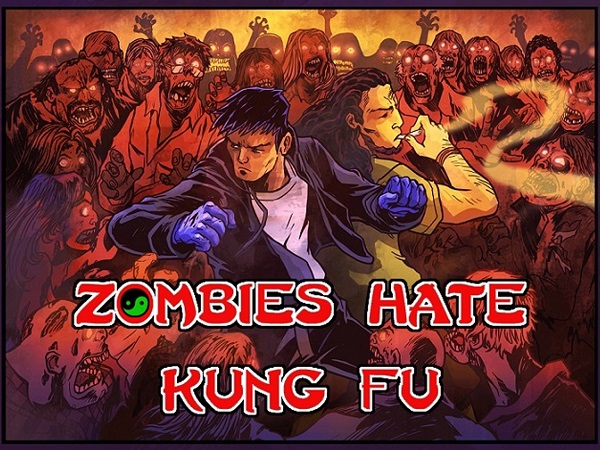 It’s true. Zombies absolutely hate Kung Fu. Bet you didn’t know that, did you? Well lucky for you, we found out more in our chat with the great Ricky-Marcel Pitcher who told us all about his latest project…

A Place to Hang Your Cape: I love the title, it definitely grabs your attention and gives a hint as to the story, but can you fill us in with a bit more detail as to what it’s all about?

Ricky-Marcel Pitcher: Thanks, the title is designed to excite! I’d like to think that the story offers more than the standard zombie apocalypse. The comic is set well after the zombie outbreak, so now things are starting to calm down, humanity is coming back in small communities, each with their own ideas and laws. The main characters (Mann and Ziggy) are outsiders who didn’t fit in the old pre-zombie world, and aren’t interested in following the rules of any of the new communities. Mann is high level martial artist from Hong Kong, he had a boring desk job before the outbreak, now he gets by using his skills to fight a safe path for him and his partner. Ziggy is pacifist marijuana grower and enthusiast, he can trade his crops with the new communities for the supplies that he and Mann need to survive, their partnership is mutually beneficial and lets them both utilise the skills that made them oddballs in the old world, but are now key to survival. Later more characters join them on a quest that becomes the central narrative, but I don’t want to give that all away here.

AP2HYC: One of the most unusual things about this project is the fact that you worked with a real kung fu choreographer! Why did you want to do this?

Pitcher: There are plenty of zombie comics out there, and zombie ‘everything else’ too, not to mention lots of martial arts comics. To try to make my comic stand out, I wanted to really offer something unique, and bizarrely the unique selling point in my kung fu themed comic, is that it actually features kung fu. I don’t want to start disrespecting the existing body of kung fu comics, but they generally don’t pay any care or attention to their kung fu content. Story is key, don’t get me wrong, but why not actually base the fighting on real kung fu positions and show a fight progress through authentic moves? This was my thought process and with the help of kung fu teacher, and Hong Kong action choreographer, Leo Au Yeung, I feel like we have put together something really special.

AP2HYC: And what was it like to work with Master Leo?

Pitcher: The process of filming the motion capture fight scenes was really interesting, as the writer I have owned every scene in the script and given specific instructions to the art team, but the fight scenes are completely Sifu Leo’s creation. Like a movie fight scene he ran through several takes with his student/stunt men zombies, working out how the fight would progress and finding the most action packed way to deliver each scene. My most enduring memory is that he would often deliver several techniques and the stuntman would fall down, but then Sifu Leo would say “but this is not enough” and then deliver a bone crunching finishing move to ‘destroy the zombie’. So you will see in the final comic that zombies don’t come off well at all. 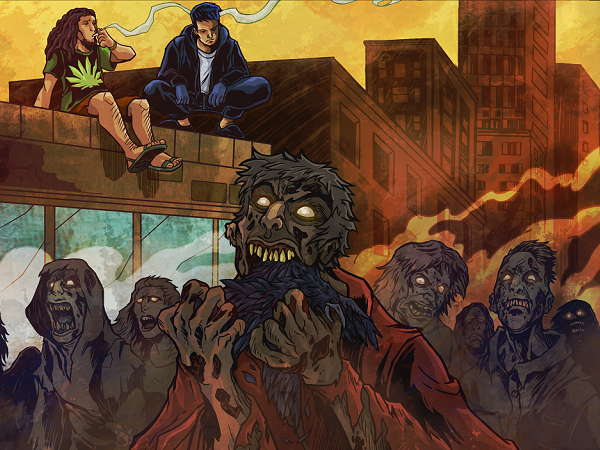 AP2HYC: You’ve used a technique somewhat like rotoscoping to create realistic kung fu scenes, can you tell us more about your technique and how it works?

Pitcher: It’s really very simple, rotoscoping takes multiple frames per second to create video, we videoed the fights but only took out the key images to piece together each fight, then passed them to the artists to insert into the comic. The important thing here was to show enough so that the reader can see where each blow is coming from and the progression of the fighting style, without slowing down the fight too much. If you look at a fight in “martial arts” comic without any professional direction, you won’t really have any idea how the fighter is using their techniques, its generally a series of big hits. The fight scenes in ZHKF are more detailed and you can appreciate the timing and sequence of the action.

AP2HYC: You had a very successful KickStarter campaign earlier this year, what stage are you at now with the project?

Pitcher: Thank you, the success was really encouraging. There’s no debate that the world of comics is dominated by big successful properties, so to get so much enthusiasm and support for a totally new creation is really encouraging. The artists (lead by David Velasquez in Bogotá, Colombia) are putting the finishing touches on the comic now, so we are weeks away from completion, printing and the promotion. I’m hoping to take the comic to as many comic conventions as possible.

AP2HYC: Do you have any plans for a sequel – or can you tell us about any other upcoming ideas you have for new projects?

Pitcher: I’d love to produce a sequel, I’ve created an expansive fictional world with a lot of potential for future stories and plenty of interesting characters, we just need to see a bit more enthusiasm for the first graphic novel before we start talking about proceeding with more. And yes, I have more projects in the pipeline and am always looking for new work opportunities, people can contact me, pre-order ZHKF or check on what I’m doing at my website www.VeryGraphicNovels.com