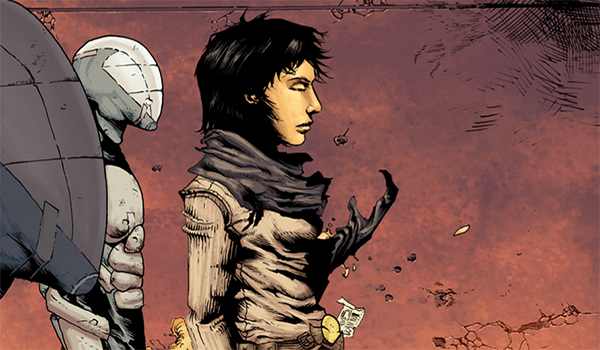 As we’ve learned time and time again from movies, television shows, novels, etc., creating any sort of artificial life form is bad news. The main problem is our expectation that as the creators/ humans, we should be able to control every action the sentient machines make. Unfortunately, it doesn’t work that way. Ask any parent trying to control their teenager. Template, written by Quinton Miles and illustrated by Andres Quezada, explores the automaton experience through the android Beta. Modeled after Ina Britt, an agent of Oversight who died six years ago, Beta is the second attempt at an android soldier after Alpha turned rogue and murdered a bunch of workers. As she learns what she can and cannot do as a participant in Operation Paragon as well as an android, the reader can’t help but wonder if Beta will follow in Alpha’s footsteps, and if the murderous path is inevitable.

While the story promises an action-packed adventure, the way the comic was presented posed a bit of an issue. While I applaud the artistic detail of each illustration, I am not really a fan of the repetitive display of drawings. In order for the comic book to read almost like an animation, the same images are reused with only a couple of lines of new dialogue added on. This tactic, however, slows down the pace of the scene. It feels like a weird deja-vu experience that causes me to miss extra bits of information because my brain does not want to read the same thing again to look for the new lines. Scenes that also contain fight scenes, such as in the beginning, stand still. The action does not leap off the page as the story suggests. 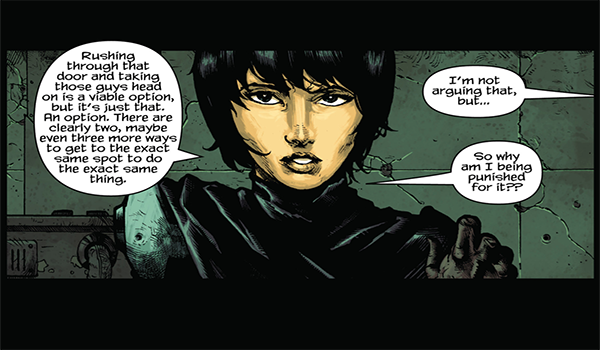 However, after reading the first issue a couple of times, I am impressed with the amount of exposition it was able to fit in. While introducing the story and the characters, it was able to also suggest the moral implications of controlling free-thinking beings. This ethical problem not only extends to androids but to humans as well. The Oversight agents, Hayden Torres and Bryce, also state that they must answer to a higher power. It is shown with Beta that improvisation will be reprimanded. As I read through these pages, many moral paradoxes began to form in my brain. Although it should be a right to have free-will, without rules, would free-will lead to crime? Also what intrigues me is the ethics of what is a justified kill? Oversight sends Beta on missions in which she murders people, and yet they qualify Alpha as rogue because she murdered a bunch of people. Is Oversight bad? And Alpha actually good?

During the last few pages, Alpha finally makes an appearance. While Alpha isn’t murdering anyone like previously discussed by characters, Alpha is plotting something sinister for Oversight. This seemingly “revenge” plot is certainly intriguing as it leads to many questions hopefully answered in further issues. Most importantly, Alpha plans on meeting Beta. Although Alpha’s intentions for Beta are not stated, will Alpha be able to convert Beta to fight against Oversight? Does Beta have a choice?

What do you think Alpha has planned for Beta? Sound off in the comments or send us your thoughts on Twitter!