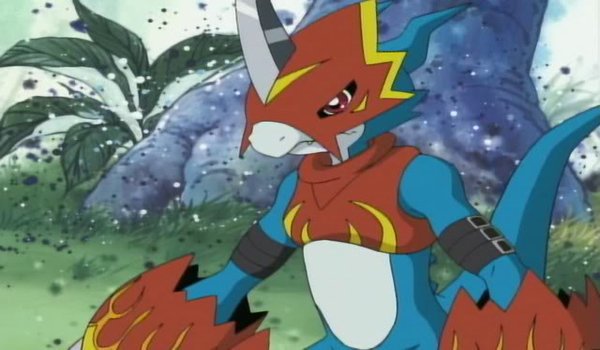 Welcome to the second part of DigiMonth, a seven-part Rerun Review series looking back at all of the past seasons of Digimon in anticipation of the six-part movie Digimon Adventure Tri. In this part we look back at the second season, Digimon Adventure 02, sequel to the first season. But what a mess it is. It is a very mixed bag of good parts and mostly bad parts. Uninteresting characters, plot holes so big you could lose a submarine in it, dreadful writing decisions, and a few episodes that are either extremely stupid or a stroke of genius. The dubbing process was so troublesome for Jeff Nimoy that he left the series. I have a lot to say about Adventure 02, so let’s not waste anymore time. As with all of these reviews, there are spoilers for the series.

The ongoing story of this season is both complicated and repetitive, usually falling into routines you’d see in a Pokémon episode. Set four years after the first season, the Digital World is under threat from an evil human named the Digimon Emperor who enslaves the Digimon using brainwashing Dark Rings and prevents digivolving used the monolithic Control Spires. The second generation of Digidestined, which includes veterans T.K. and Kari (Doug Erholtz and Lara Jill Miller), bull-headed, obnoxious Davis Motomiya (Brian Donovan), peppy tinkerer Yolei Inoue (Tifanie Christun), and quiet, serious Cody Hida (Philece Sampler), must combat the Emperor and save the Digital World alongside their Digimon partners.

It is rather quickly revealed that the Emperor is child genius Ken Ichijoji (Derek Stephen Prince), and no attempt was made to disguise this fact. Ken plots to fully conquer the Digital World with the destructive Kimeramon, but his actual partner Wormmon (Paul St. Peter) sacrifices his life to allow Kimeramon to be destroyed by Magnamon. The whole reason of Ken’s evil is slowly revealed throughout the series: neglected as a kid, older dead brother who he envied then got hit by a car, corrupted by outside influences and his own issues, big guilt complex, etc.. Yikes, Ken has got to be one of the most tragic characters in fiction. Thankfully Wormmon’s death is short-lived or poor Ken might’ve jumped in front of a train.

Eventually, it is revealed that Ken was a mere pawn for the evil Arukenimon (Mari Devon), Mummymon (Kirk Thornton), and their creator Yukio Oikawa (Jamieson Price), who have a long drawn out plan to break down the barriers between Earth and the Digital World so Oikawa can go to the latter. There is a lot of dark material here, and all of the villains drive the plot rather than the heroes. There is also the rather pointless BlackWarGreymon (Steven Blum), a clone of Agumon’s “Mega” form, who spends the whole show moping and trying to figure out his purpose in life, and then sacrifices himself to completely seal off the Digital World. Though, this is rendered completely moot by the end of the season.

In the final arc, it is revealed that the entire scheme – the Digimon Emperor, the Control Spires, breaking down the barriers of dimensions, the Dark Spores used to corrupt Ken and other kids, was all planned out by the Digimon secretly possessing and controlling Oikawa from within: Myotismon. Yes, the bad guy from Digimon Adventure.

The Digidestined and Oikawa’s group end up in a strange dimension that can grant wishes where Myotismon absorbs the Dark Spores and becomes MaloMyotismon. He then rather cruelly murders Arukenimon and Mummymon, then proceeds to cover both worlds in darkness. All of the Digidestined of the world band together to destroy him, and the ending could be seen as cheesy but makes sense if you think about it. More on that later.