Home » Captain America: Civil War – Nothing We Haven’t Seen Before 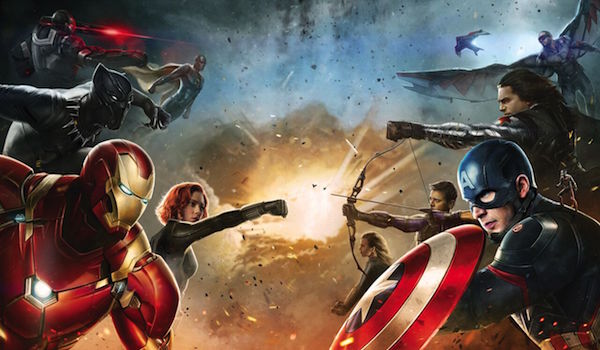 Surprise, surprise – the trailer for Captain America: Civil War STILL hasn’t dropped to the public yet. The movie is only a few months away, and the most we’ve gotten so far is a bunch of leaked set pictures and a description about the trailer released at the D23 Expo. It’s a fact that almost every single Marvel Cinematic Universe fan is excited for this movie, even if a lot of people were disappointed with Avengers: Age of Ultron. People are pumped to see a film where the Avengers fight their most fearsome enemies: each other. It’s one thing to battle against an evil trickster god or a legion of robots; but what happens when you’re forced to fight against the allies who have stayed by your side for so long?

Here’s the one problem with the concept of Civil War (at least, in the MCU): the Avengers fighting against each other is nothing new. In the numerous Marvel movies we’ve seen so far, almost every hero has fought against one another. Seriously, I don’t think there is a single hero who hasn’t at least thrown a punch at one of their companions.

One of the first instances of friend fighting friend in the MCU is during the events of Iron Man 2. While Tony Stark is hammered out of his mind and strutting around his house party in his Iron Man suit, his best friend Rhodey decides to step in. He dons a prototype of an earlier Iron Man suit and engages in a brief yet entertaining fight with Stark, all while being accompanied by some sick tunes. One issue I had with the fight was regarding Rhodey’s proficiency with the suit. This was the first time he put on the costume and yet he was able to control it pretty well. Remember back in the first Iron Man when it took Stark a couple of tries to even learn how to fly? MAYBE the prototype that Rhodey was wearing was adjusted so that a beginner could use it easily, but I still think it’s fishy.

Since we’re 99.9999999% sure that War Machine and Iron Man will be on the same side throughout Captain America: Civil War, we can assume that there won’t be another repeat of this incident of the two shell-heads confronting each other.

To be fair, this was more of Thor vs. Iron Man, but I’m tossing Cap in there since he got involved toward the end. In Avengers Assemble, Thor and Iron Man clash in the middle of a forest after the former snatched Loki from S.H.I.E.L.D. custody. You’d think that someone like the God of Thunder would be able to crush Iron Man like a tin can. Nope. Surprisingly, Stark holds his own for most of the fight, and he even manages to leave a couple of scratches on Thor here and there. Captain America dives in at the last minute to break up the fight, but Thor is still not happy. He almost flattens the Star-Spangled Avenger if it wasn’t for the Vibranium shield absorbing the blow. Mjolnir, the hammer forged in the heart of a dying star, is unable to break through some metal found in the heart of Africa? Just… I don’t know…

Thor’s fighting prowess doesn’t really matter since he’s not scheduled to appear in the next Captain America film, which kinda makes sense since he wasn’t around in the Civil War comic. In fact, in the comics, Iron Man’s side is joined by an android clone of Thor named Ragnarok, who makes the MCU’s Thor look like a chump. But in order to play out the full “Ragnarok in the Civil War” storyline, they’d have to bring in other Marvel characters like Goliath and Hercules and so on, so it’s probably a good idea to exclude him completely for the sake of simplicity.

This one isn’t exactly a fight per se, but it still counts as Avenger vs. Avenger. In Avengers Assemble, Bruce Banner loses control of his rage and transforms into the Hulk aboard the Helicarrier. Unfortunately, he does so in the presence of Black Widow, who becomes a prime target of the Hulk’s rampage. We watch as BW spends the next couple of minutes running from the beast, narrowly avoiding being squashed several times. This showed us that Black Widow, while not exactly super-powered, is still capable of surviving in a superhuman battle, thanks to her gymnastic and acrobatic abilities.

Once again, this fight might not matter too much in the grand scheme of things since the Hulk isn’t set to appear in Captain America: Civil War; however, Thunderbolt Ross, who eventually becomes the Red Hulk, has been spotted in the D23 trailer and cast list. It’s unknown if he’ll become the red version of our favorite smasher, but if he does, will he possibly clash with Black Widow?

Thor vs. the Hulk – Avengers Assemble

Now THIS is a fight. The God of Thunder versus the Incredible Hulk. Who would win? Well, since they’re both heroes, obviously nobody technically wins. The two titans become engaged in battle when Thor saves Black Widow from the Hulk. Thor realizes that Banner is unable to control himself, so he goes easy in the earlier half of the fight, merely blocking and avoiding blows whenever possible. Once the Hulk makes Thor bleed, though, he goes on the offensive. The God of Thunder summons his hammer and goes to town on his opponent, clubbing the green giant across the face and knocking him halfway across the Helicarrier a couple times.

Both Thor and the Hulk are off the table for Captain America: Civil War, but it’s been indicated that they will appear side-by-side in Thor: Ragnarok. It’s possible that we’ll get to see them have another battle in Asgard while the rest of the Avengers are duking it out on Earth.

Black Widow can’t catch a break in Avengers Assemble. After dodging the Hulk, she runs right into a mind-controlled Hawkeye, and the two BFFs get into an intense fight. Here is where we get to see the master assassins both shine. They’re the two minor-league Avengers who don’t have super powers or hi-tech armor to assist them in battle. It’s nothing but fists and blades (and teeth) in this brutal one-on-one.

Black Widow and Hawkeye are both going to be appearing in Captain America: Civil War. Not only that, but they’re also going to be on separate sides, with BW on Team Stark and the Hawkeye on Team Rogers. The D23 trailer contained a scene where the two fought each other while exchanging quips about their friendship. Looks like all the Hawkeye and Black Widow fans are going to be upset about this one…