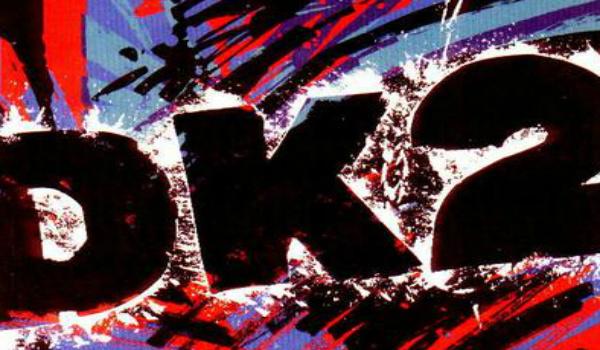 The Master Race is upon us. One last time, we will be thrust into Frank Miller‘s “Dark Knight” universe, where our heroes have been reduced to instruments to be used in political power struggles, talking heads tell us all we need to know, and true crime is committed not in the streets, but in board rooms and executive offices. Gotham City is a cesspool, and only one man can clean it up. One last time.

It’s Batman, of course! In light of The Dark Knight III: The Master Race‘s impending release, we thought it would be a good time to revisit one of Miller’s previous works within his Dark Knight universe. But we will not be looking at the legendary The Dark Knight Returns or even the polarizing and often confounding All Star Batman and Robin: The Boy Wonder. Nope, today we will be venturing into the depths of one of Miller’s most challenging and…for lack of a better phrase, “wacked out” works to date: The Dark Knight Strikes Again. 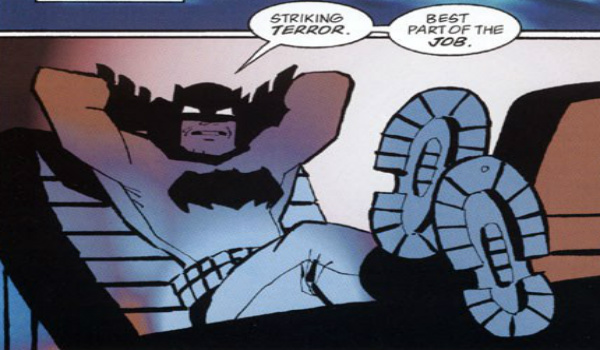 The Dark Knight Strikes Again takes place where TDKR left off. Bruce Wayne has gone into hiding after faking his own death, where he trains ex-mutant gang members as soldiers for his self-described “holy war.” These soldiers won’t be enough however, so Bruce sends the “Batboys” (yes, seriously) to rescue the likes of the Flash, The Atom, and Plastic Man from Lex Luthor’s clutches. Of course all the commotion caused by these daring rescues puts the spotlight on Batman and the Batboys, which causes Superman to be tasked, once again, with taking down Batman. After being beaten into submission, once again, Superman decides to join Batman just in time for aliens to invade Metropolis. Meanwhile, an old, seemingly immortal enemy who looks errily similar to the Joker emerges and attacks the Batcave. Yup, that’s the synopsis for The Dark Knight Strikes Again. We will be going into some spoilers at this time, so please keep that in mind as you continue reading.

The Dark Knight Strikes Again starts off very strong. First we get a “newspaper clipping” of a Vicky Vale story about Bruce Wayne/Batman’s death that gives us some background (or if you haven’t read TDKR…but you have, right?), followed by some media segments that have become cornerstones of Miller’s work. Then we get an absolutely genius scene in which Ray Palmer/The Atom is rescued by Carrie Kelley. I really believe this is the high point for the entire book. Miller’s artwork is solid throughout and the twist at the end where we discover Palmer has been in captivity in a petri dish the whole time works incredibly well. Then…the rest of the story starts…

Miller includes a lot of DC Comics’ characters in The Dark Knight Strikes Again. From Martian Manhunter and Captain Marvel (Shazam), to The Creeper and Question, there is no shortage of cameos during the three issues that comprise the story. Many of these appearances are troublesome though, as they only serve to delay the book’s third act. By the time we get to the “big reveal” that Brainiac is behind the invasion and that Lex Luthor plans to kill most of the world’s population, everything that came before almost seems like a waste of time. Yes, we needed to rescue Flash and co., yes Lex Luthor and Braniac must be stopped, but those aspects of the plot are comics 101. The Dark Knight Strikes Again does little to further the story of Miller’s Dark Knight universe outside of telling a very stock superhero story. And why make Dick Grayson evil? I think of all the characterizations that Miller takes liberties with in The Dark Knight Strikes Again, this one is the most criminal. We already know that Jason Todd is dead in this continuity, so why not bring him back somehow? Surely he’d have a bone to pick with Batman since his death. Instead we get Dick Grayson going crazy, undergoing “gene therapy,” and posing as the Joker in order to confront Batman. It just seems wrong. Batman cutting off Grayson’s head only for Grayson to catch it and put it back on is just overkill.

Then there’s Lara, daughter of Superman and Wonder Woman. Now, Supes and Wonder Woman having a child is not exactly out of the realm of possibility, and it that were to happen, we could be sure that the child would be immensely powerful. That’s pretty much what we get with Lara, but her inclusion in The Dark Knight Strikes Again just seems like a dues ex machina. Lara has been hidden from the government her entire life, despite her parents being tools of the government (a little far fetched, no?), and she emerges at the perfect time to save the day. Although I did enjoy finally seeing the people of Kandor getting their revenge on Brainiac. 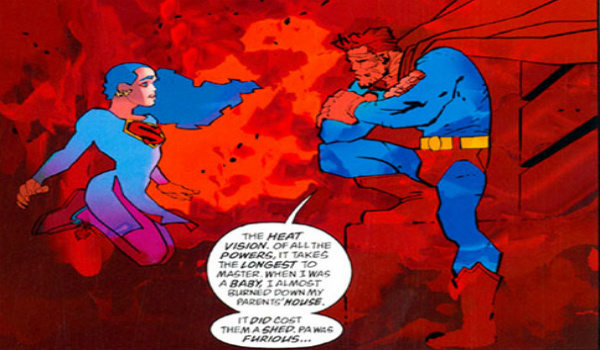 The artwork in The Dark Knight Strikes Again is much weaker in comparison to some of Miller’s earlier work. The opening scenes described above are especially well done, but once we get a full look at Carrie Kelley after she rescues Ray Palmer, something seems off. Miller’s artwork is consistently inconsistent throughout the entire book, with characters’ proportions being almost comical at times coupled with some odd choices in perspective. Now, one could say that this was a stylistic decision made by Miller, which is acceptable to a point. There is a great scene where Superman is speaking to Lara and he shows her a locket with pictures of himself/Clark Kent and Lois Lane inside. The two photographs look like they leaped right out of a Golden Age Superman comic, which drives home the notion that the world our heroes once knew is now gone, especially when compared to the overall look of The Dark Knight Strikes Again. It’s a mess at times, sure, but maybe that is exactly what Miller was trying to convey here. I won’t say that the art is easy to swallow though, and it certainly puts me off from re-reading this book the way I often go back to TDKR.

With all these criticisms aside, there are things that I quite enjoy about The Dark Knight Strikes Again. First, Miller’s use of media hysteria is always a welcome sight to me, as I believe it truly encapsulates the unreality that is constantly shoved down our throats by so-called “news” programs. The way he depicts talking heads arguing with one another over issues both poignant and erroneous is well done, if a little confusing to follow at times in The Dark Knight Strikes Back, which again I believe might be the point. I also enjoy the reveal that President Rickard is really a computer program. This forces us to take a look at our world leaders and ask if they have our best interests in mind, or if they are simply “programmed” to tell us what we want to hear? At the end of the day, the strengths of The Dark Knight Strikes Again are within what happens underneath the cut-and-paste “plot to destroy the world.” It’s just a shame they have been overshadowed by some questionable decisions on Miller’s part.

If I learned anything from revisiting The Dark Knight Strikes Again, it’s that nothing needs to be undone in order for TDKIII: The Master Race to be good. We can still safely go back to a Gotham City where criminals lurk in the shadows and heroes stalk them under cover of night. Keep the alien invasions (even if they are Brainiac) and the secret-child-reveals to a minimum, and for the love of God…no time travel!

What are your thoughts on this strange book? Did you love The Dark Knight Strikes Again or hate it, or are you somewhere in between? Let us know in the comments section and on our Twitter page!