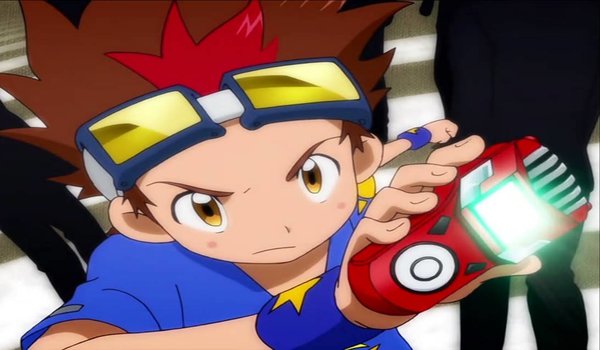 While not officially considered its own season, the third season of Digimon Fusion might as well be one since it follows its own story and introduces new characters like Digimon Adventure 02 did. The full title of the season is The Young Hunters Who Leapt Through Time, and is currently the only season that hasn’t been dubbed in English. I did say at the start of DigiMonth that I would only review the English dubs, but I’m breaking that rule for the sake of completion. So, Young Hunters is the direct continuation of Fusion, but it is by far the poorest of the seven Digimon seasons, with uninteresting characters and pure filler, and the only thing that saves it is the awesomeness in the last couple of chapters.

Warning, there are spoilers ahead so be weary.

Set a year after the ending of Fusion, Mikey Kudo and Ewan Amano have formed a basketball teamed named after the Fusion Fighters. Also on the team is our new lead and gogglehead number seven Tagiru Akashi, who is a rehash of Davis Motomiya but twice as annoying. Tagiru idolises Mikey and wants to be a superstar in whatever career path suits him. He stumbles into the DigiQuartz, a parallel world settled between Earth and the Digital World, where random Digimon roam. Tagiru learns other kids, called Hunters, search for Digimon to capture and add to their collection. Capturing monsters to harness their powers. That sounds familiar…

Anyway, Tagiru teams up with the anarchistic Gumdramon to become a Digimon Hunter, gaining his Digivice from a mysterious old man who seems to be able to bend time. Mikey and later Ewan join him on hunts as mentors/babysitters, accompanied by their partners Shoutmon and Damemon. Rivaling them are a trio of new characters and their partners, smug Ryouma Mogami and Psychemon, Airu Suzaki who likes all things cute and Opposomon, and quiet Ren Tobari and Dracmon. Most episodes deal with a monster of the week, introducing other hunters, and bringing back other characters from Fusion. But going on in the background is a story that threatens not just the world but the whole universe.

This season has a lot of problems and very few positives. The story is mostly filler despite the hints that the hunters, the presence of the DigiQuartz, and the old man are all connected to a bigger threat. Mikey only gets to learn something big is going on half way through the season, but we ignore this to watch Tagiru acting like he is Ash Ketchum, fighting Digimon who are all doing evil or are misguided for some reason. Tagiru doesn’t grow or change as a character, and even when the world is crashing down about him he is still focused solely on his dream to surpass Mikey, even when likely all of his loved ones face annihilation at the hands of the evil Quartzmon who resembles something off Pixels.

None of the new characters beyond Airu grow as people, Ryouma is a very irritating anti-villain, and Ewan, despite being advertised as a main character, gets very little attention beyond being the straight man to Tagiru.

Most people only stuck around to get to the big finale, which became a Crisis Crossover-esque get-together, where it reveals Quartzmon threatens not just the Fusion universe but the entire multiverse of Digimon for some reason. See, the old man has secretly recruited every single protagonist from the first five seasons to aid in stopping the spread of DigiQuartz around the world. So an entire episode is dedicated to Tai, Davis, Takato, Takuya, Marcus, Matt, Ken, and Mikey all teaming up and destroying an army of Myotismon with their Digimons’ strongest form and it is glorious. It is just obvious fan-service but it is awesome obvious fan-service!

But then they make the dumb mistake of having Tagiru join their group since he has the right material to be a hero. I don’t think so. Quartzmon then defeats everyone instantly except for Tagiru and Gumdramon, who are apparently the most powerful of all despite only being able to digivolve into Champion form with no fusions, Mega level, or spirit evolution to back them up. The show has such an anti-climax that I would’ve been disappointed if this was the last season of Digimon forever.

There is also the weird plot twist revealing the old man is in fact a resurrected Bagramon, the bad guy from Fusion, opening all sorts of questions. It was theorised the old man was actually an elderly Mikey from the future who came back in time to change the past, but something tells me this idea was scrapped for the Bagramon plot twist.

This could be the end of DigiMonth, but it is not over just yet. There is still the computer-animated film Digimon X-Evolution and the first of six Digimon Adventure Tri movies to come. Despite all of the ups and downs, Digimon has proven that it is still going strong and I look forward with excitement and anticipation towards the return to the cast of Digimon Adventure. Prodigious!

Was this season of Digimon a waste of time? Should Fusion have just ended with two seasons? Are you looking forward to Digimon Adventure Tri? Sound off below or leave a comment on our Twitter feed.