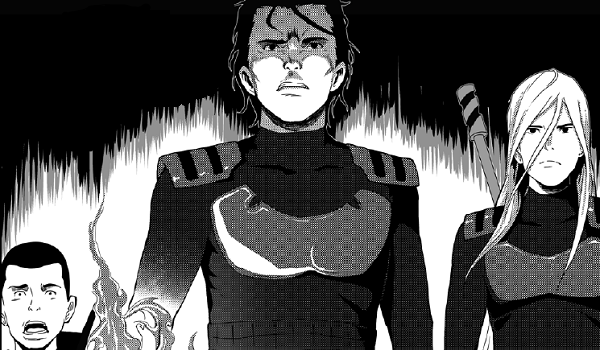 Again, Almier appeals to my racial equality-starved beast with the introduction of young ethnic characters, with the first page consisting of Palestinian, Filipino, and Malaysian Almier. (Almier, as you may remember, are individuals who possess the ability to draw from the energy of their soul and manifest them as powers.)

While the first chapter took place in London, we’re now taken to what we are told are The Almier Lands: nine islands where the Almier form a society. While I would have liked to see more action in London, I do believe it was a clever move to start the story somewhere relatable to allow the reader to acclimate well to the ideals and practices of this new society before moving to a fantasy environment.

Our three new characters, Juda, Zed, and Nazir, are on the island Ma-Katun when Juda senses someone using their ability in the dead of night. We get a first hand look at the powers of the Almier, as well as the various ways they can manifest and damage. It’s an introduction much in the same way chapter one is, but from a different perspective. We also are introduced to an antagonist, Dr. David Murray, an unregistered Almier who claims to be part of a larger group called the Visionaries who seek to do what most villains do: recreate the world in their image of right and wrong. After a round of visually interesting combat, our three heroes find themselves at a loss as Murray and his men teleport out of the situation with what they came for: a hard drive with the names of all the registered Almier. It’s not entirely clear yet just how bad that is for the world, but it leaves me intrigued enough to want to find out.

As with the first issue, Almier runs with the cliché of conveying information through a character, this time Nazir, who conveniently forgets crucial information. Not that it doesn’t get the job done but it kind of ruins my suspended belief. I know it’s aimed toward a younger audience but allowing the reader the opportunity to infer some things on their own or learn them further down the line (such as the use of the hard drive) shows a lot more appreciation for the reader and is just better writing than literally spelling it out. Although the character is referenced as an “airhead” and brings about the “Captain Obvious” chapter title, I can’t help but feel there’s a more creative way to go about revealing crucial information.

Even still, I’m still fascinated by where Almier is going and I believe building more of the foundation through a different perspective was a smart decision, allowing us to see more unique characters, especially Almier from other countries and learning that it is an international occurrence in the world. We got a glimpse of different groups of Almier, including the “wildings” like Murray that I look forward to learning about. Almier can really build itself into a strong series once it sets the stage!

Almier can be downloaded for FREE online from Kiru Comics. What are your thoughts on Almier? Let us know in the comments section or send us a Tweet!