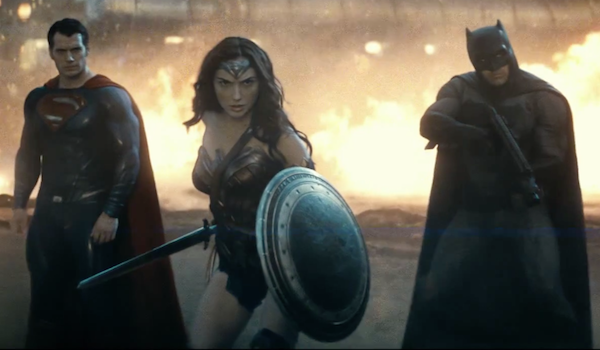 With Batman v Superman: Dawn of Justice now just around the corner, let’s take a look at what we’ve seen so far, particularly over the last month.

We got a 43-second clip revealed on Conan, which takes place in the immediate aftermath of what appears to have been a battle of, well, super-heroic proportions. Superman tells Batfleck that “the bat is dead, buried” and to not respond to the bat signal the next time it graces the skies. Batman responds with the line that we heard in the first teaser trailer back in April of last year– “Tell me, do you bleed? You will.”

Now, is it me or did the line delivery, especially from Henry Cavill, feel somewhat cheesy? I know it’s a comic book movie and these things are obviously going to happen, but for some reason he felt a little too much like a cartoon. Ben Affleck, however, felt right. I’d be very surprised if there’s anybody out there still on the Batfleck hate bandwagon. He looks like Batman, like Bruce Wayne; and the voice sounds great, slightly robotic but better than whatever Christopher Nolan was going for with Christian Bales voice. A bat-voice changer makes more sense. I mean, all the gadgets that Batman has and Nolan didn’t give him a voice changer? They sell them in Toys “R” Us for crying out loud! With everything we’ve seen so far, the multi-award winning actor looks as though he’ll definitely redeem himself (as far as superhero roles) from the reputation of 2003’s Daredevil.

The TV spots for the movie make it seem that both characters are being portrayed as showing more vigilantism and slightly villainous traits – seemingly more so than we’re used to. We are seeing both characters from the other’s perspective. In Henry Cavill’s words, “Superman sees Batman as a criminal; brutal and unforgiving” and Batman sees Superman in much the same way, as somebody who “has the power to wipe out the entire human race” and that “we have to destroy him.” He refers of course to the mass destruction caused by the battle between he and Zod in Man of Steel.

We got a better look at Batman in hand-to-hand combat in the third and final trailer, taking out a number of armed men. The sequence looked like something straight out of the Arkham games, and it’s some of the best action we’ve seen of the caped crusader on screen; despite Wayne saying that he’s “getting slow” in his old age. The trailer also gave us a better look at Jeremy Irons‘ Alfred Pennyworth. He and Bruce are as close as they ever were, with Alfred still keeping tabs on Bruce and being as father-like as we’ve come to know. One of the coolest and most interesting moments of the trailer was Batman blocking a punch from Superman, much to the Man of Steel’s surprise. I wonder what Mr. Wayne has up his sleeve? The answer? Probably everything. He’s Batman.

One character that we’ve not actually seen that much of (as far as BvS is concerned) has been the centre of much discussion; Gal Gadot‘s Wonder Woman. Her inital casting, as with Ben Affleck’s Batman, was somewhat a controversial choice. People thought she was too ‘petit’ to be the Amazon princess. Again, as with Ben Affleck, people have warmed to the idea. For the most part, she looks good. The small glimpses we got of her in the first two trailers looked great, and we finally heard her talk in the final trailer, telling Affleck’s Bruce Wayne that “You’ve never met a woman like me.” I thought she delivered that line very well; the way Diana would. People were getting a little anxious about Gadot’s ability to pull off a believable American accent, but having said that, who’s to say that Diana would even have an American accent? She’s an Amazon, heavily based around Greek mythology; perhaps a more exotic, Gal Gadot-accented voice would work rather well. We also got a little more in-depth look at the solo movie and of the character in action recently on the CW’s Dawn of the Justice League special.

Jesse Eisenberg has been yet another controversial choice. We’re doing well here! However, no matter how many controversial casting choices there are, we should always refer back to Heath Ledger. Nobody thought that that cowboy from Brokeback Mountain could pull off his Oscar-winning performance of the Clown Prince of Crime. However, that isn’t going to stop me from saying that to me, and many other people, the Now You See Me star doesn’t quite feel like he has the presence of the evil genius that is the Man of Steel’s arch nemesis, Lex Luthor. He still absolutely seems like a sort of mad scientist, telling Amy Adams‘ Lois Lane that ‘psychotic’ is a “three-syllable word for any thought too big for little minds”. They might be going in a slightly different direction than we’ve come to expect of the character – which I’m totally fine with – but I don’t believe we have quite seen enough to really tell what this Luthor is really going to be like.

One also has to wonder how this will tie in with the rest of the DC Extended Universe; particularly the upcoming supervillain based Suicide Squad. We’ve seen Batman appear in the trailer, we’ve seen a hint at the Joker in the Dawn of Justice trailer, and recently, a French magazine appears to have revealed the Jokers inclusion in the movie, as well as Jena Malone as Barbara Gordon/ Batgirl. This, however, has yet to be confirmed as actual fact. It first apprared that Suicide Squad would be similar in tone to BvS, that was until the release of the second Suicide Squad trailer, however. It’s evident the it’ll be a little more light-hearted and fun compared to the seriousness of BvS. David Ayer’s Suicide Squad has opted for less traditional looking depictions of its characters à la Batman v Superman. Also, could this somehow tie in to Nolan’s Batman trilogy?

What does the ‘V’ in Batman V Superman really mean? There’s a theory that it’s the Roman numeral and not ‘vs.’And with Christopher Nolan serving as an executive producer, we can only imagine. As always with these types of movies, there’s a million theories as to how all of this can make sense, as well as theories for Suicide Squad. We’ll just have to wait and see.

Obviously with a movie as hyped and anticipated as this, it’s very easy to worry that it won’t live up to it all. The only actual reference we have for our expectations for this movie is 2013’s Man of Steel, Zack Snyder’s first venture into the DC Extended Universe, which received very mixed responses. Snyder is no stranger to comic book movies, having directed 300, DC’s own Watchmen and the might as well be a comic book movie, Sucker Punch. So with these under his belt, I trust that we won’t be disappointed with ‘the greatest gladiator match in the history of the world.’

What do you think? Will Batman v Superman live up to all the hype? Let us know in the comments or via Twitter!