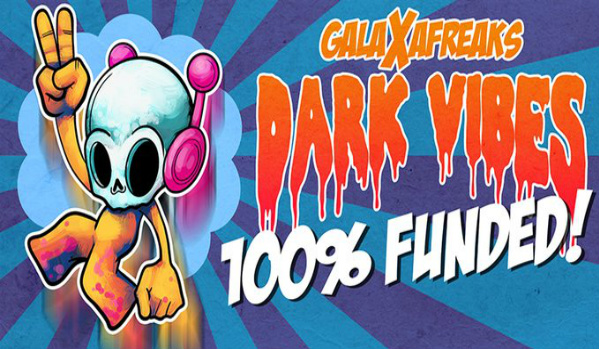 If you frequently visit this site, then you will no doubt be a huge sci-fi geek, so the crazy intergalactic series GalaXafreaks by Andrew Pawley, is definitly something that you should check out. The latest story arc in the series, titled Dark Vibes, is currently raising funds on Kickstarter, so we sat down with Andrew to learn more.

AP2HYC: Can you give an brief overview of the GalaXafreaks series and where you plan to take it in the future?

Pawley: GalaXafreaks Comics was born out of the web comics I drew a few years back featuring the character Captain Yeah! I really wanted to produce a printed comic and turned originally to Indiegogo to crowd fund it. The ‘original series’ of 4 issues were funded this way. For the new miniseries Dark Vibes I have turned to Kickstarter to ask people to help get the project moving.

The GalaXafreaks are galaxy sized weirdoes getting up to cosmic hi-jinx and galactic gaffs. The original series focused on individual stories that took a surreal and daft twist on multidimensional reality. Each issue is jammed packed with psychedelic cartoon art featuring a whole raft of characters. These comics are very humour based and inspired by the slap stick antics of my boyhood comic reading list. You can download issues 1 & 2 as hi-res PDFs when you sign up to my mailing list at http://www.galaxafreaks.com

The characters operate on a range of scale from trans dimensional to the sub atomic. Oh! and the whole universe is set in the head of a baby who lives inside a Higgs Boson particle!

Back in February I launched a new mini series called Dark Vibes. This comic has a story arch that will flow over fives issues. GalaXafreaks: Dark Vibes features the GalaXafreaks and the Dark Vibe Underlords. The comic will be a 32 page full colour freaky extravaganza! Printed on high quality silk stock and bound in a strong laminated cover, the product itself is of stellar quality and really allows the cosmic artwork to shine!

This time around the story will run over fiver issues. Hence the new title and rebooting at issue #1!

At the beginning of issue 1 we meet the Darklings. One Darkling in particular is different from all the rest! What has Meeko got to do with the origins of her planet and what is her relationship to the Cosmic Giant Captain Yeah!?

I currently running the Kickstarter for issue 2 in which the plot thickens as Captain Yeah! and Meeko start to realise the epic proportions of the Dark Vibe Underlords plans!

After I’ve completed Dark Vibes I’ll probably return to the original series or maybe explore Captain Yeah! in his own comic!

I owe my previous successes to the fact that I have some great people fighting in my corner. The fans how support GalaXafreaks are great.It’s such an uplifting feeling knowing that there are people all over the world who dig my work and want to support me.

AP2HYC: The Kickstarter campaign mentions the work reboot, so is Dark Vibes a reboot of the series?

Pawley: I think I mentioned this above? It’s not really a reboot as it is the same ‘universe’ Just a more developed story.

AP2HYC: Can you talk about the villain of this current volume?

The villains in Dark Vibes are the Dark Vibe Under-lords. Lead by the eldritch Fuzz Muff! Fuzz Muff and his cronies come from a reality made up of Dark Vibes but they want to take control of the GalaXafreaks reality so they hatch a plan to mix both dark and light vibes. This brings them into conflict with Captain Yeah! Little does he know that actually he is a vital part of their plan!

AP2HYC: Is the universe of the series so large and expansive that there could be infinite stories to tell?

Pawley: Oh most definitely! The premise of the GalaXafreaks is that anything goes. I have a friend, Chris, who is a physics teacher. We have some awesome conversations about reality, the multiverse, subatomic behaviours (most of which I don’t really understand!) and this has been a massive influence on my stories! However, all factual science is most definitely thrown out of the window.

I’ve been very lucky to tap a rich vein with GalaXafreaks and have lots of plans for future projects.

AP2HYC: Is the series appropriate for both adults and kids?

Pawley: Of course! My own kids are the biggest fans (and critics of GalaXafreaks) and a whole range of people support the comic through Kickstarter. Everyone from hippies to comics fans and loads others too.

I’d say Galaxafreaks: Dark Vibes is for anyone who loves to read fun, colourful comics that tell a great story! Kids and adults alike will love Galaxafreaks.

Just make sure you get your laughs before the kids stash it away or pass it onto their mates!

Pawley: GalaXafreaks will eat your brain! Then chew it up and spit it out in a reconstructed mind-freak! Trust me, you’ll feel better for it! Only in a meta-physical kind of way! And not in this reality either!

Have you backed GalaXafreaks on Kickstarter yet? Let us know in the comments section or send us a Tweet!