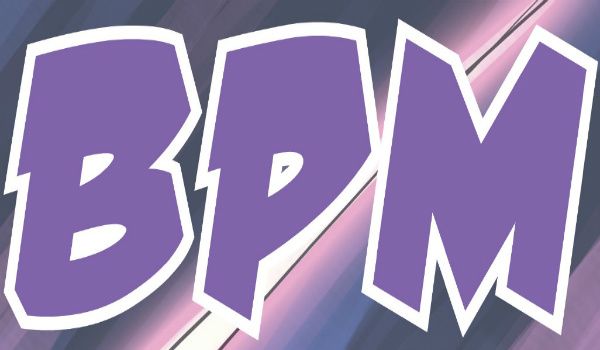 Hey gang, how about a nice Hawai- I mean Big punch! Gee, I hope I didn’t date myself too much with that Hawaiian Punch joke! It was good though, right?

Today we’ve got two spanking new issues of Big Punch Magazine to take a look at, so if you haven’t read our review of issues two and three you can do that here. For those of you who are familiar with Big Punch Magazine you will recall that it is absolutely packed to the brim with excellent content and has something for just about anyone. So, without further ado let’s get issues four and five open! There will be some minor spoilers so uh, just watch out for that alright?

Last time we saw the crew of the Reflektor they were experiencing some disturbances in time when they came into contact with a giant creature. Of course this all has something to do with a strange artifact called the “Pherra’tan,” but you knew that already (right?). In these two issues the Captain and his crew finally get to deliver the Pherra’tan to Palatine, who appears to be an old “comrade” (heh) of the Captain. Of course this is not before the Reflektor and its crew narrowly escape the giant, universe consuming monster. In issue five we get a brand new story arch called “Moons Over Mevilleton” in which the crew is stranded by Palatine in a strange universe.

While the previous story arch of Cuckoos featured art by Nich Angell, starting in issue five Mike Bunt and Capucine Drapala join him on inks and colors, respectively. The artwork for Cuckoos in issue five is quite different from what we’ve seen so far, but it looks a bit more mature thanks to the new team effort. Alice White returns once again as the letterer of Cuckoos.

Continuing with the pattern of changing teams on some of the titles in Big Punch Magazine, Orb now features art by Verity Glass in these two issues, while Jack Tempest was the previous artist. I thought Tempest’s work was fantastic, but I must say that Glass brings Orb to a new level and the artwork fits very well with the overall feel of the story. 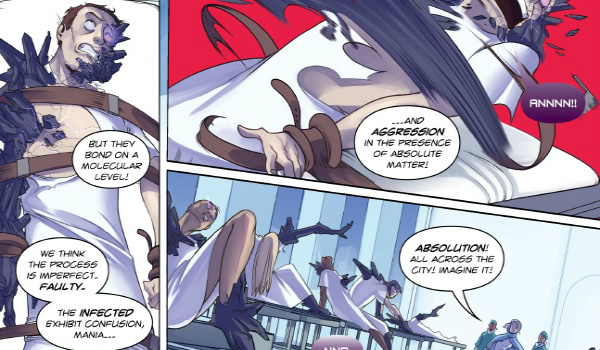 We get to take a trip back to Prizm in issue four of Big Punch Magazine for another installment of The Wall. It seems as though Cyanne and her team were unable to gather enough crystals (remember the crystal rain?) to fund an excursion for outside the wall to look for Cyanne’s brother. But what’s this? Lapis and her team, the “Elites” have more than enough and want to take Cyanne and her entire team along with them! Interesting indeed; what’s Lapis’ game here?

We get an in depth look at the “catchgear” as well in The Wall, which I quite enjoyed. Angell’s artwork is on point once again, with a sort of “less is more” approach and some nice bright colors. I was a little disappointed that The Wall didn’t continue in issue five of Big Punch Magazine considering we’re finally getting to travel outside the walls of Prizm, but I suppose we’ll just have to wait for issue six!

Between Cuckoos, Orb, and The Wall you sci-fi fans out there will have more content than you can shake a sonic screwdriver at. In particular I find Cuckoos to be incredibly well written and often mind-bending, and it is certainly for the most hardcore of sci-fi geeks (presents sci-fi geek card; fixes glasses). 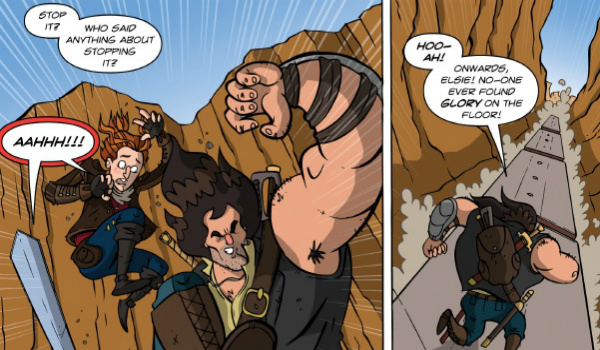 Ah yes, 99 Swords. Once again written by Lock and Lucy Brown with art by James Stayte. As I’ve said previously, 99 Swords is a nice break in the sci-fi action and is typically placed after Cuckoos and Orb and before The Wall, which is perfect if I may say so. Our story continues as Elsie Blackwood faces off against August Von Karva (still love that name) while wielding The Man Sword. And no, it’s not a sword named “The Man Sword,” it’s an actual anthropomorphic sword that can talk and even think for itself!

In these two issues Elsie manages to drive off Karva, who like any good villain vows to “be back;” don’t you just love that? After initially refusing Tyler Goldensheath’s (still think that name is hilarious and amazing) offer to join him in seeking out the 99 swords (it’s not just a clever name), Elsie decides her life of privilege is far too boring and decides to play Swordhunter. The duo square plan to rob a train and face off against a Company Swordhunter who wields the “Quake Sword.”

Similar to what we saw in The Wall, issue five’s installment of 99 Swords features a “Guide to the Known Swords” that details a bunch of wacked-out weapons that we may be seeing down the road.

Ready for more comedy? By now you may know I have a weak spot for cats so it should come as no surprise that despite the presence of some A-grade sci-fi in Big Punch Magazine, Cat and Meringue is still my personal favorite. Written by Alice White with art by Nich Angell, Cat and Meringue is more than a little bizarre.

In issues four and five of Big Punch Magazine we get to learn how Cat and Meringue met! Of course it’s totally insane and involves our heroes using the Key of Time that they obtained from “time whale,” as I so lovingly call him, in the last issue. When Cat and Meringue travel back in time to ancient Egypt and the construction of the Sphinx, hilarity ensues and wonders of the world crumble to the ground! Read Cat and Meringue with caution because your face will hurt when you are done with it! 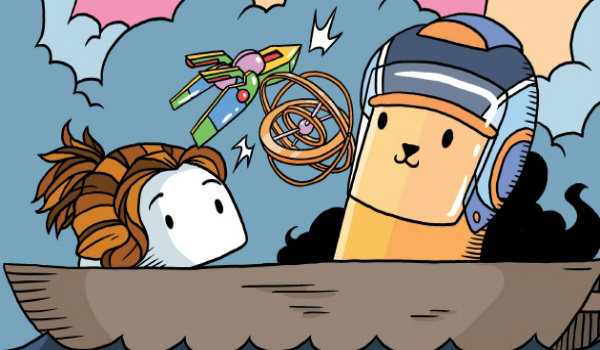 Once again I have to hand it to the Big Punch team; this comic is an absolute blast to read. If you haven’t been keeping up, issues can be bought here along with some other goodies. You can also read issue one of Big Punch Magazine for free (yes, free!) at the official website, which also contains a ton more Big Punch related material.

It’s worth mentioning that in the pages of Big Punch Magazine there is an ad for Big Punch Studios’ very first card game: Sandwich Masters! For more information on Sandwich Masters click here and support the Kickstarter! You want that sandwich game, don’t you? Well then what are you waiting for? Go do it!

What do you think of Big Punch Magazine? Is it a technical knock out (TKO), or one of those boring decision-based outcomes? Or maybe you just don’t like boxing metaphors? Let us know in the comments section and on our Twitter page!