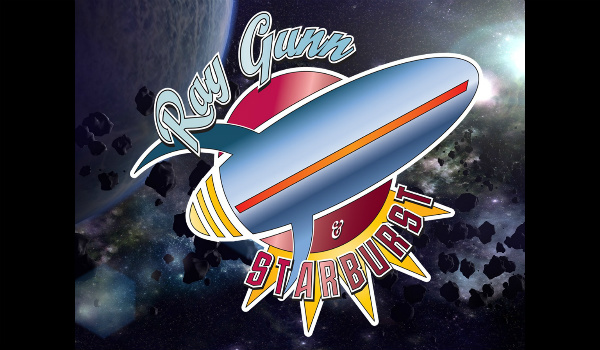 Greetings Earthlings! If you like science fiction and you also like to laugh then Ray Gunn and Starburst, the old-school “radio” style podcast is right up your alley! We recently had a chance to speak with Holly Rose, creator of Ray Gunn and Starburst in one of our patented “interviews,” and the results of said interview can be read below! So if you would please calibrate your visual sensory organs (eyeballs) for “read interview,” we can begin!

AP2HYC: For our readers who aren’t familiar with Ray Gunn and Starburst could you give us a little background on the characters and their adventures?

Rose: Ray Gunn and Starburst are two rather haphazard heroes who ended up getting flung together after Ray started a bar fight (which Starburst finished). I say heroes, more like hero, as Starburst is the only one who actively does hero-ing and Ray tags along behind moaning and getting punched in the face.

At the beginning of Series 1, Ray has just had his wife leave him and so, of course, he has decided to buy the best looking second-hand spaceship so he can head off to have adventures. Unfortunately those adventures appear to be mostly at the bottom of a bottle and he ends up in this bar fight.

Starburst on the other hand is a bit more of a tearaway, action hunting, mystery. She turns up just when Ray needs her most, not that he would say that, and drags him into a life of chaos and heroics.

There is also the S.U.I.T., Star’s AI who has become sentient and sarcastic. S.U.I.T. stands for  Survival Utility Intelligence Technology and it’s, er, damaged? Or possibly just really grumpy.

I would mention our main villain, Castelan Lar, but since the end of Series 1 there has been a law put into place not to talk about him for more than 5 months, so I don’t want to risk it. You’ll have to listen to the show to find out about him and his evil pastries.

I don’t want to say too much for people who haven’t heard Series 1, but this story does not go the way you expect.

AP2HYC: Ray Gunn and Starburst feels like a return to the Golden Age of Radio, albeit with phony commercials and a wise-cracking narrator. What were some of the inspirations behind it?

Rose: Well that was exactly what I wanted it to feel like. I grew up listening to Radio 4 and talk radio, so it’s been seeping into my head for a long time. Of course, there are influences like Hitchhikers Guide to the Galaxy, Doctor Who, Blake’s Seven, Flash Gordon, etc. but I was also influenced very heavily by Charles Chilton’s Space Force and Journey Into Space -some of the best classic radio sci-fi in my opinion- , as well as Andy Hamilton’s radio work and John Finnemore. I’m a massive Radio 4 nerd (laughs).

AP2HYC: Tell us how the cast and crew of Ray Gunn and Starburst came together.

Rose: Okay, so it started with Ian Sharman and I. We came up with the idea together and then I ran away to University and made it into something bigger and better and generally more ridiculous. After that I brought Dominic Westerland on board to be Ray, as I had pretty much always thought of him for the character and then for everyone else we held open auditions which we advertised for online. And the rest, as they say, is stress, pain and lots of long nights listening to audition tapes.

AP2HYC: Since Ray Gunn and Starburst is a podcast, does your role as director differ from the role of a director in a film or a television show?

Rose: Yeah, I would say so. The only things that I really have to “correct” are the delivery of lines and certain inflections. There’s no need to make sure the shot is correct or any of that. But then I have to spend a lot of time making sure we have exactly the right sound effect and music for a scene otherwise it falls flat. When you have to get everything across through sound there’s a lot of pressure to get it right. It’s probably the only time Ian and I have had a proper falling out because I had my director’s hat on and he was producing and it all got a bit heated.

AP2HYC: Tell us a bit about your writing process for each episode.

Rose: I generally plot out the whole series first, and then go down to plot each episode separately before doing a scene break-down with what has to happen in each scene to keep the plot moving, and then I start writing. I try to write in 1000 – 1500 word chunks, unless I’m really going for it, just because I find that if I don’t break then I lose focus and I have to rewrite things anyway. I also try to write whenever I can; including lunch breaks if possible. I make it sound very organised but mostly it’s Ian shouting at me to write because I’m faffing about a certain line or a scene direction.

AP2HYC: Do the actors strictly follow the script, or is there room for ad-libbing?

Rose: Series 1 was pretty much on script apart from a few lines, I think mostly because we were all very new, not only to the medium but to each other and didn’t want to go off-book as it were. I have left space in the Series 2 script for more ad-lib and I hope that the cast take advantage of that.

AP2HYC: What is a typical day in the studio like working on an episode of Ray Gunn and Starburst?

Rose: Manic and yet very dull at the same time. There’s always a lot going on, with people switching in and out of the studio but that means that other members of the cast will be sat around waiting and killing time. Roller-chair derby was my personal favourite.

But, we get everything done, even if we’re playing around someone will always be working and getting scenes recorded. I spent a lot of time last series doing final rewrites as well, because I am that person and so I was working late into the night to get the scripts perfect.

AP2HYC: As far as production is concerned, will there be any changes for Series 2?

Rose: We’re in a different studio, and we have more experience now, but otherwise no.

AP2HYC: What can we expect from Series 2 of Ray Gunn and Starburst?

Rose: Time travel! We are doing the whole ridiculous, over the top, seriously-this-doesn’t-make-sense-so-don’t-try-and-make-it-make-sense time travel story. This also introduces a brand new hero to our team, Kes, a non-binary gendered time hitchhiker who creates all sorts of mischief, though Star seems to be rather fond of that. But Kes does not come alone, oh no, we also have a new villain, The Librarian -who does have a name, I promise- and their terrifying right hand man, Scrivener. The Librarian is set on possessing all knowledge of the Universe so you can imagine how that goes down. Oh and shuttle hijacking pigs. Of course.

AP2HYC: What are some of your favorite sci-fi stories, whether they be books, films, television, or otherwise?

Rose: Oh god, that’s a hard choice! I’ve always loved Star Trek, Doctor Who, and Babylon 5, but I’ve never really been a huge fan of straight sci-fi. I prefer my sci-fi to be mixed with something else. I’m currently reading Annihilation which gives a really nice twist to the post-apocalypse sci-fi genre. Really worth a read.