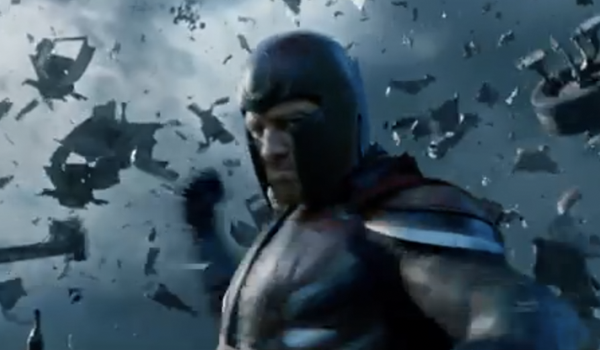 The master of magnetism, Magneto has been the arch-enemy of the X-Men since its inception appearing in the very first issue of the comic book. It seems fitting then that he was also the main antagonist of the first film as well. However over the course of the comics he has been portrayed as more of an anti-hero and he has been taking that role more often in the movies then one of an antagonist. Of course his tragic history has always made him a villain you understand and sympathize with even as he commits dastardly deeds. So what does this mean for Magneto in X-Men: Apocalypse?

For Apocalypse Magneto is back in full villain mode. He may not be the main antagonist but he has joined Apocalypse and becomes one of his four horseman. But it seems he has his reasons for doing this that goes beyond the tragedy of his life we have already seen. He mentions losing a family and we see him in one of the trailers holding someone in the rain screaming. It seems we will be seeing a version of Magneto’s history from the comics where he married a human woman and had a daughter, who was later killed by a mob when the town they were living in found out he was a mutant.

One can surmise that after the events of Days of Future Past, he gave up his life as Magneto and settled down to live in peace only to lose it all. This will give us to see a very raw and emotional Magneto that we have never really seen before in the films. Yes there has always been the tragedy of the holocaust driving him and in First Class we saw his mother killed in front of him as a boy, but to see a broken Magneto looking for something to make everything make sense for him is a Magneto we have not seen yet. He is going to be a broken man looking for a purpose in life that Apocalypse then gives him by turning him into a horseman and then declaring war on all of humanity.

Another big question is how does Quicksilver fit into Magneto’s journey in this film. A recent trailer for the film confirmed what was hinted at in Days of Future Past, that Magneto is Quicksilver’s father. Does this mean that Quicksilver will be the one who is able to bring Magneto from the brink. Will the revelation that he has a son be enough to get him to leave Apocalypse’s side?  We know that Apocalypse can make his horsemen more powerful and when you have someone like Magneto who is already one of the most powerful mutants to begin with he would make a big difference in taking down Apocalypse. I could see the ending involve Magneto about to kill one of the X-Men but then Quicksilver reaches him and is able to get through to him. Magneto would then realize the error of his ways and turn against his new master.

Magneto has always been one of the most complicated characters in the X-Men series which has made him one of the most compelling villains of all time in any media. Apocalypse promises to show us one of the most interesting versions of the character by taking him to what may be his lowest point in the series and giving us the most damaged Magneto we have seen. I can’t wait to see what Fassbender does with the material he is given and hope it will be another amazing performance for one of my favorite characters.

What do you think? Are you looking forward to seeing how Magneto evolves in X-Men:Apocalypse? Let us know in the comments below or on twitter.