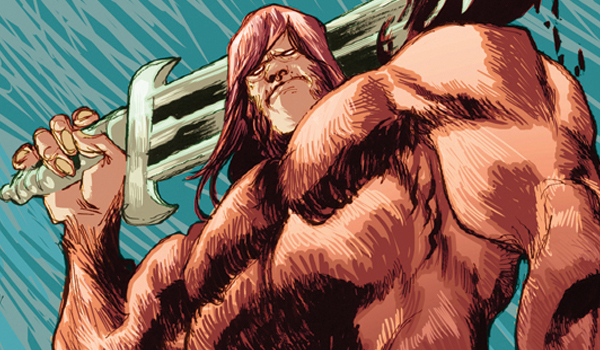 The ape-man is on Mars and they never saw him coming! Picking up from where the first issue left off, Bigfoot: Sword of the Earthman #2 by Action Lab Entertainment begins with our legendary hero smashing his way through hordes of alien enemies in the Martian wastelands. Brutal and unyielding, Bigfoot proves himself to be an indomitable force of nature that would simply have to be seen to be believed. Luckily for us readers, Bigfoot’s new companion, Castor, is there to chronicle his epic feats.

As the unlikely duo make their way through the perilous red planet, they encounter a group of survivors who have taken on the responsibility of lighting giant torches of green flames every night. Throughout the Martian lands, its become known that these beacons are the best line of defense in the fight against swarms of giant ravenous moth-vampires that relentlessly attack the villagers as they sleep at night. As the story progresses, Bigfoot’s keen animalistic senses pick up on a wounded female warrior who had suffered the wrath of the moth-vampires during a preemptive strike gone wrong. Upon her dying breath, the woman confesses her knowledge of the whereabouts of an item known as the Heart of the Sun; a precious jewel with immense value that only seems to be recognized by Castor. Quick witted and eager to leave his new acquaintances behind, Castor devises an escape plan for himself and his hairy companion in an attempt to seek out the highly prized gem.

From the very beginning of this issue, writer Josh Henaman and illustrator Andy Taylor throw the reader right into the action without skipping a beat. Bigfoot is relentless and it is so fun to see him take on enemies that are so befitting to his extraordinary strength. Henaman and Taylor also continue to portray Bigfoot as a beast with a heart. No doubt that due to his size and strength Bigfoot could easily do whatever he wants, but when the need arises and lives are at risk, this Missing Link refuses to ignore the oppressed and will always be there to save the day. On this new world, Bigfoot’s legend grows not from tales of his brief sightings, but from his actions of being in the thick of battle for all to see. I couldn’t help but notice a bit of irony at play here, but in a good way. I mean, Bigfoot is typically portrayed as a forest dwelling recluse on Earth, yet on Mars people seem to naturally gravitate towards him and admire him as an alpha male leader. Not to mention, I couldn’t help but notice that the artwork in this issues was particularly telling of our hero as well. The first few pages are filled with panels that are constructed with organic and asymmetrical lines that once again contribute a rocky cave-like feeling that is quite appropriate for a story about a primal warrior. Personally, I wouldn’t mind seeing more of these thoughtful details sprinkled throughout this series as it continues.

With all the great aspects that Bigfoot: Sword of the Earthman does have going for it, it does still tend to suffer from a minor downfall yet again. For the second issue in a row, I’ve noticed that there tends to be a bit of a disconnect in the story telling that left me feeling a bit disoriented. One particular example comes to mind during the panels between Bigfoot saving the day by breaking the green beacon and the recovery that immediately followed. While I understand what the creators were going for in this transition, I almost feel like it might have been more successfully carried out on screen rather than in print and therefore it required a bit of a smoother transition. This is, however, yet another easily forgivable offense that doesn’t detract from the overall experience. After all, Bigfoot is still one legendary bad ass and I’d love to see what happens next… Now if we could just get him that awesome sword that he has in the cover art.

So what did you think Bigfoot: Sword of the Earthman #2? Do you agree with this review? Head on over to the comic’s website here for more Earthman action and don’t forget to sound off in the comments or send us your thoughts on Twitter!