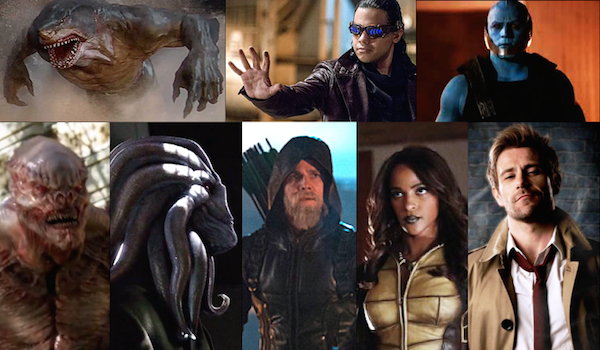 This season, many shows featured characters from other dimensions, planets, and timelines. So many, in fact, that we needed to create a new category just for them! Some were alternate versions of familiar faces, some were familiar faces from other shows, and some had faces that were… let’s say “made for radio”. We specifically limited this to cameo/guest appearances, since nearly every character from every eligible show could fit on this list. 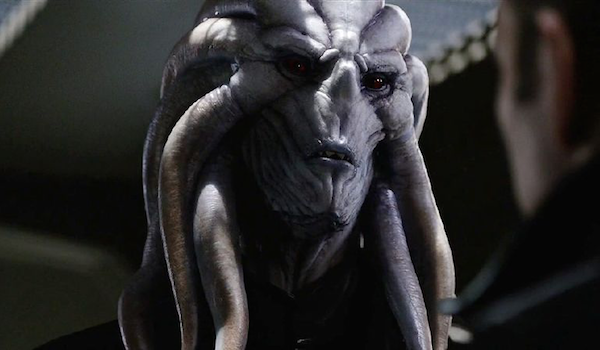 Ironically, Hive both started and ended his time on Agents of S.H.I.E.L.D. “out of this world.” The universe’s first Inhuman, and tentacly inspiration for Hydra, was originally wasting away on distant-planet Maveth but, thanks to some classic body-possession, managed to come down to Earth long enough to cause complete chaos for our favorite team of S.H.I.E.L.D. agents. Though not around for long, Hive stirred up a heckuva lot of trouble and caused a helluva lot of damage for each and every member of S.H.I.E.L.D. Whether it was using the memories of Jemma’s space-boyfriend to bring her to tears, or all but Inhuman-rufieing Daisy to get her to do his bidding, Hive was willing to hurt anyone in order to achieve his master plan. Of course, S.H.I.E.L.D. managed to stop him before said plan was fulfilled and, ironically, did so by shooting him out-of-this-world in a QuinJet strapped with a nuke and headed for space. –Silje Falck-Pedersen 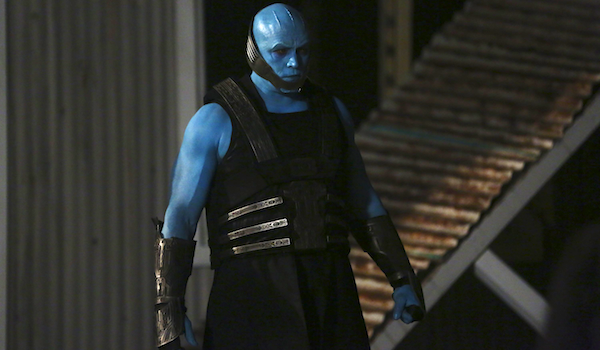 The reappearance of the Kree in the third season of Agents of S.H.I.E.L.D. added some fun backstory to the ancient aliens. Having been directly responsible for creating the first Inhuman, the trouble-causing Hive, the Kree wanted to be equally responsible for killing it. Coming down to Earth thanks to an alien phone that would have made E.T. jealous, the Kree reemerged with a bang and immediately went gunning for their experiment-gone-wrong. Unfortunately, their Inhuman creation and his equally Inhuman minions proved to be too much for the Kree warriors, who perished on Earth and failed in their mission to bring an end to Hive. –Silje Falck-Pedersen 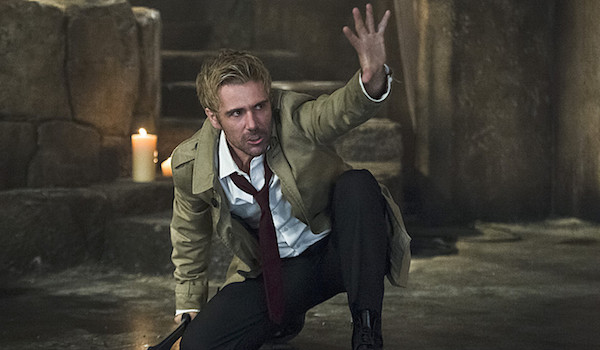 Death really means nothing to John Constantine. Whether it’s development Hell or the real deal, he’s been there and back and has the t-shirt to show for it. The fact that his NBC show was cancelled after only one season wasn’t going to stop him from popping back up on the small screen. Matt Ryan’s return as everyone’s favorite chain-smoking demon hunter on Arrow was one of the highlights of the season. Rumors are still flying about whether Ryan will return to the role again, whether on Legends of Tomorrow, Arrow, another CW show, or even on film. Either way, a crossover from another network certainly counts as “out of this world”. –David Molofsky 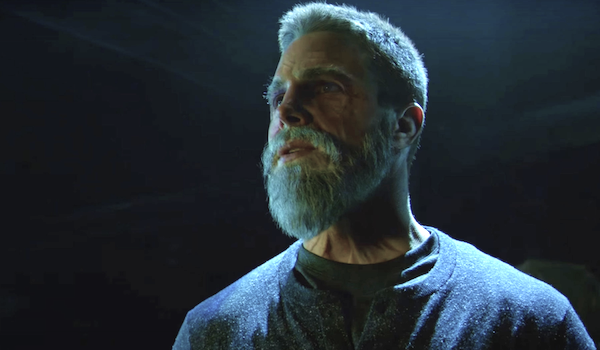 Love ’em or hate ’em, Arrow‘s signature flashbacks have been a mainstay of the show since Season 1, giving us a glimpse into Oliver’s past and how he became the Green Arrow we know and love today. So we pretty much know how his story began. But how does it end? Well, in one of the most memorable episodes of Legends of Tomorrow, we got a glimpse at a possible future and a version of Oliver Queen pulled straight from the pages of The Dark Knight Returns, complete (or perhaps incomplete) with his missing arm. It was certainly a fun moment and a nice tribute to a fan-favorite comic. –David Molofsky 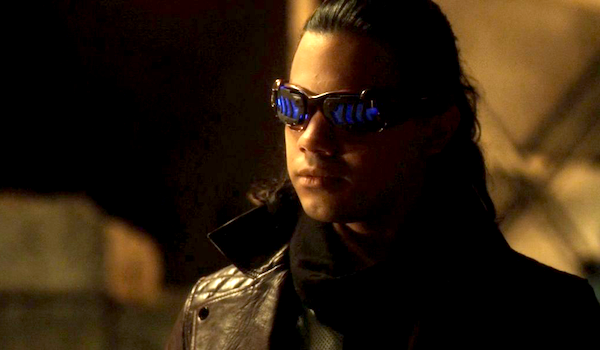 If ever there was a character who deserved to have an evil doppelganger, it was Cisco, if only for the pure geek out factor. Reverb’s appearance was a brilliant, if short-lived, and it was great to see Carlos Valdes having so much fun hamming it up on the dark side. My favorite Reverb moment was the later payoff of the character, when Cisco and Caitlyn dress up as their evil counterparts to confront Black Siren. The moments we saw Valdes playing Cisco playing Reverb I got all kinds of good vibes. –David Molofsky 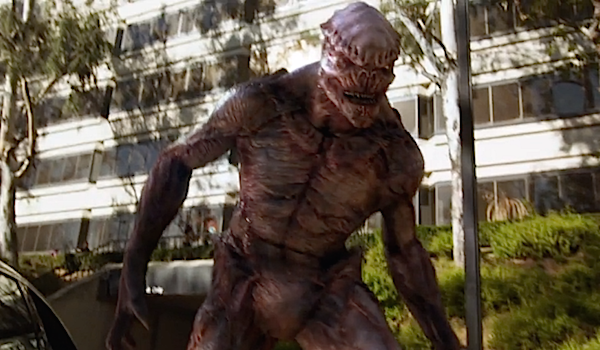 Supergirl featured a wide variety of characters from other planets and dimensions (Barry Allen, I’m looking at you). But perhaps to most out of this world cameo of all came from our closest neighbour. The White Martian’s appearance was unexpected and played very well throughout the episode by Heroes alum Tawny Cypress. What made the White Martian stand out so much was it’s complete otherness, both in its look and its thinking. It was from a planet where appearance means next to nothing, and yet still managed to be a racist. Out of this world indeed. –David Molofsky 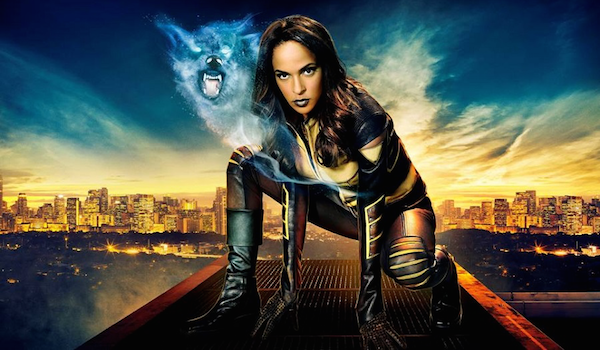 The moment I heard that the CW was producing a series of animated shorts featuring Vixen, I knew it was only a matter of time before we saw her in live-action. And I was not disappointed by either appearance. While at first I was a bit dubious about how Vixen’s powers would play out in live-action, I was pleasantly surprised to find that the animal “shadows” actually looked quite good (the fact that they were used sparingly helped too). Apparently I wasn’t the only one who enjoyed seeing Vixen as she has now been confirmed to be on the roster for Legends of Tomorrow Season 2, albeit played by a new actress. –David Molofsky 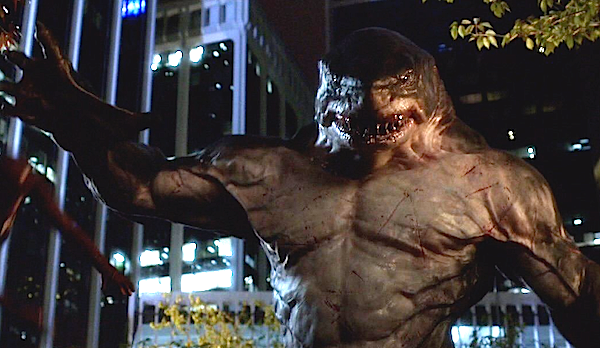 Apparently getting King Shark on screen cost the equivalent of two episodes’ special effects budget for just 30 seconds of footage – but hell if it wasn’t worth it! King Shark’s first appearance had me laughing so hard I had to rewind the whole sequence and watch it again just to hear the dialogue.  And then he came back, bigger and better than before. Once more, I never would have believed that a live-action version of this character would ever work, but I was definitely proven wrong. While some of the CGI effects were a bit naff at points, that didn’t stop, “King Shark,” from being one of the season’s most enjoyable (and ridiculous) episodes. –David Molofsky

Which, “Out-of-This-World,” character were you happiest to see in our world for a bit? Be sure to vote and Tweet out your choice for the world to see using #ap2hycTVAwards!