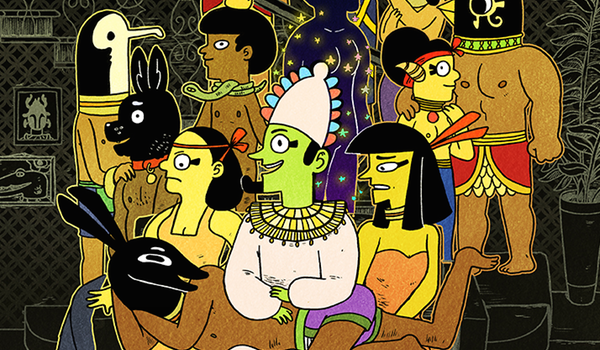 If you are someone like me who is intrigued by ancient mythology and the different myths and beliefs of different civilizations than Pantheon is a book you will fall in love with. It tells the stories of the ancient Egyptian gods in a funny, modern way pointing out some of the ridiculousness of the stories, but without malice and with respect, while also making sure the actual stories is told accurately. Not only will you be entertained and tickled you will probably learn something about one of the ancient cultures of the world.

One of the best things about this graphic novel is how easily accessible it is for readers. Even if you have no idea who any of the gods are and what they are gods of the novel makes sure you know who these gods are and makes sure the story flows easily without getting lost or confused about who everyone is. I know somewhat about Egyptian mythology, being a big Mummy fan as a kid I would always be intrigued by Egyptian Mythology in school when we would learn about Ancient Egypt, but am in no way an expert and I never felt confused about who the gods were, how they were related to each other even though that can get complicated sometimes with incest and characters being born after they are already alive because gods. You can also see how Egypt used this mythology to help explain how they saw the world and set up their culture.

The graphic novel is also hilarious. Some might find it offending to make fun of an ancient religion but to me humour has always made things more relatable. It’s never anything done out of spite or saying how stupid the mythology is but just a little light fun at things that don’t make sense, stupid decisions made by the gods, and how sex and semen in particular play a major part in the story. Some people might think that the sex jokes are juvenile but when one of the major plot points in the mythology involves a god who has poison semen, I think it warrants some kind of commentary. While it never gets as raunchy as something like South Park for example, the humour reminded me of that in terms of it will be part satire with also gross out gags. If you like South Park or that kind of humour then you will more than likely love this novel, for others you might want to look elsewhere.

This is one of the cleverest ideas I have seen in a while. I now know more about Egyptian mythology then I ever did before reading this and it was also one of the more entertaining graphic novels I have read this year. I would like to see more graphic novels like these but centred around other mythologies and religions, especially the Ancient Greek and Norse mythologies would be awesome to seen portrayed in this style. This book comes highly recommended for lovers of mythology and comedy and I can’t wait to see what Hamish Steele does next.

If you have read Pantheon what are your thoughts? Let us know in the comments or on twitter and if you are interested in picking up Pantheon you can do so here.