Home » REVIEW: Metal Made Flesh: The Final Piece of Me 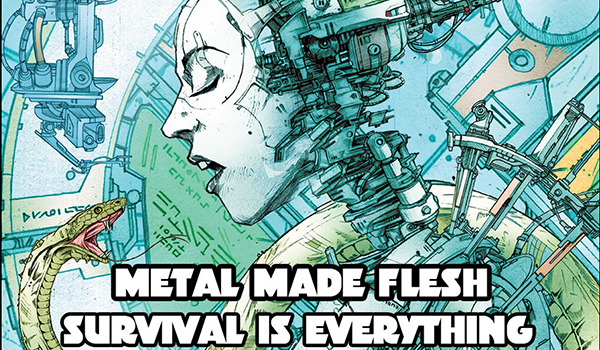 Metal Made Flesh: The Final Piece of Me is a comic that makes me believe in cyberpunk again. Mainly because it doesn’t feel like a cyberpunk story told for the masses, like many are today. Though the cyberpunk genre started out as a way to look at the dark consequences of technology in conjunction with society (tops examples being the likes of Neuromancer, Akira, or anything by Philip K. Dick), cyberpunk recently has become something focused primarily on “cool” aesthetics and simpler themes. While The Matrix is a great film, it unfortunately marked the beginning of cyberpunk’s descent into overexposure. Soon every cyberpunk story was people typing on computers and wearing circle sunglasses. This is what makes this particular comic so special, Metal Made Flesh: The Final Piece of Me gives hope that the former glory of the cyberpunk genre is not gone.

Granted, all the credit cannot be given to this one story. Metal Made Flesh: The Final Piece of Me is the first story in Volume Two of the Metal Made Flesh series. Volume One, written by Jeremy Biggs Simeon Aston, told the stories of mercenaries in a dystopian future wherein humans are mistreated and exploited. The artwork was fresh and the action was stellar, but now with Volume Two, the original duo have outsourced heavyweights in the sci-fi and comic books fields to bring an even greater story.

This new story, penned by Cy Dethan, drawn by Gary Erskine, retains the original characters and setting of the Volume One, but takes the story and artwork in a whole new direction. The protagonist (anti-hero?) of this story is Izobel Vice, a mercenary cyborg who appeared in the first issue of Volume One. Izobel awakens in a chop shop as a monstrous creature plans to strip her for parts. Izobel is joined by an AI named Leift who serves both as guide to us and Izobel throughout the story. We spend the first few pages of the story in Izobel’s POV and the comic does an excellent job of putting us in her shoes. Just like Izobel, we are left in the dark about what is going on and it is only as we read on do we find out what the hell is going on. As the story goes on, we learn more about Izobel and how she has been turning herself more and more into a cyborg over the years (she is only 6% human at this point), and how in turn, she has lost sight of her humanity.

It is Izobel’s struggle between her human and robot sides that really draws me into Metal Made Flesh: The Final Piece of Me, because it is a theme that speaks to most humans today. While we aren’t all truly cyborgs, the story makes a good case for how being consumed with technology (cell phones, computers, etc.) can lead to loss of one self. I doubt anyone who is reading this review hasn’t spent hours on their phone without really connecting to the world around them (Pokemon Go, anyone?).

Though the themes of the story are definitely the strongest part, I would be hard pressed not to mention that the action visuals, and normal visuals, of this story are sublime. Each frame is full of so much detail and emotion that you would expect these to be storyboards for a film. The action scenes are so dynamic and visceral that your heart will be pounding as you read through them. Summer blockbusters should definitely hire these creatives for lessons on visualizing action scenes.

For more on the Metal Made Flesh series, click here! What did you think of the story? Is technology ruining us all? Sound off in the comments and on Twitter.