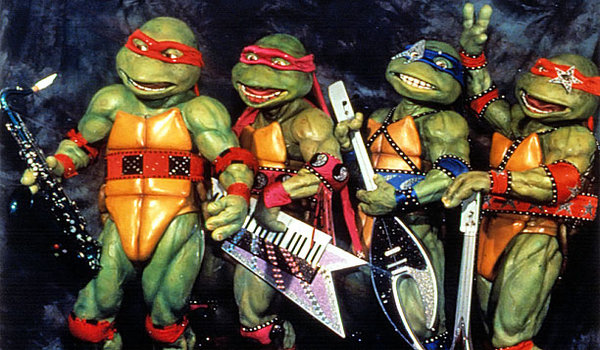 In the 1980’s, the Teenage Mutant Ninja Turtles were gods.

Such a bizarre concept should never have succeeded on paper, but it became a popular comic book, toyline, animated series, and a live action movie. Though eventually toppled by the Power Rangers, the Ninja Turtles have returned in various forms over the years. Unfortunately, for every good product, there is an equally bad one.

While the more recent live-action films are considered by many to be truly awful, they still have to compete with a hundred other TMNT products and productions to earn the title of being the worst in the franchise. Such terrible productions include: the combiner anime, the third movie, the TV show The Next Mutation, and what we are reminiscing over today… Teenage Mutant Ninja Turtles: Coming Out of Their Shells, the 1990 musical tour that nobody asked for.

Now, the turtles aren’t the first characters to put on their own stage show, and certainly won’t be the last. Heck, even Spider-Man has his own Broadway musical. But at least our favorite web-slinger’s musical debut has some artistic integrity to it. Coming Out of Their Shells is a ninety-minute joke of a musical that will live in infamy amongst those who grew up with it. While that thankfully doesn’t include me, I had to investigate the crummy concert and judge whether or not it is truly the worst thing to come out of the age of the Teenage Mutant Ninja Turtles.

The concert was sponsored appropriately by Pizza Hut, and took place at the famous Radio City Music Hall in New York City. The musical’s video release came with a horrendously cheesy, “behind-the-scenes,” documentary, revealing that the Ninja Turtles gave up their ways of ninjutsu and decided to become a rock band to promote world peace and pacifism.

Yes, you read that correctly, the turtles gave up their life mission in favor of becoming what was essentially a Christian rock group.

The stage itself is a laugh riot and was obviously aimed at the children who attended it the show in person… and seemingly enjoyed it if the grinning faces on the official released video is anything to go by.

The concept is this: Leonardo, Michelangelo, Donatello, and Raphael have decided to put on a rock concert in order to emphasize the healing power that music can have. Unfortunately, the message wasn’t exactly something that that Bob Geldof managed to achieve. Instead we got an hour and a half of the group literally being out of their shells, playing instruments as ridiculous as a one-string guitar.

April O’Neil is played by Broadway veteran Sherie Rene Scott, and Master Splinter appears too, voiced by Peter Renaday. But, the character costume is horrendous. The turtles’ costumes are shocking to say the least, mouths hanging open most of the time and moving terribly while, “singing.” It looks like Splinter was run over after walking out of a house fire. And when he sings his number “Skipping Stones”, he sounds like a cross between Bruce Springsteen and Don Henley. The song is terrible on the ears, Splinter can’t sing, and who wants to listen to a song about skipping stones. The songs themselves are the most memorable aspect of the show, particularly “Count On Us” and the catchy “Pizza Power”, which plays in the video game Turtles in Time. I bet Pizza Hut made a lot of money off this show.

But as with this kind of show, the badguys crash the proceedings to do evil things. The Shredder, Baxter Stockman, and the Foot Clan show up to destroy all music in the world using a device sent by Krang. But, my God, Shredder’s costume looks dreadful, removing his mouthpiece so the actor can talk. He spends a good twenty minutes insulting the children in the audience, and then breaks out into an awful rap number about how much he hates singing. Meanwhile, Stockman is played up to be the most psychotic, whiny-voiced mad scientist ever imaginable.

But is Coming Out of Their Shells really that bad? Well, yes and no. It is very cheesy, cheap, and obviously a cash grab, but some effort has gone into the music, producing some catchy songs, and they even rehired a couple of the original voice actors. Some commitment was given to the show, otherwise they wouldn’t have shown it at Radio City, or went on a US tour with it. The show gained a spiritual sequel called “Getting Down in Your Town”, a smaller touring musical featuring mostly the same cast. So, yes, Coming Out of Their Shells isn’t the worst of the Teenage Mutant Ninja Turtles’ legacy, but certainly isn’t the best either.

Have you seen Coming Out of Their Shells? Does it still rock or is it a terrible memory? Leave a comment below or on our Twitter feed.