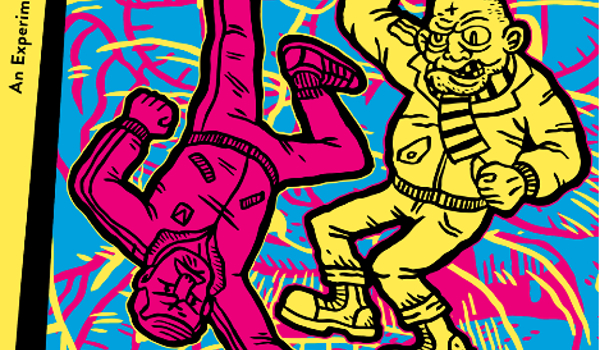 With issue #2 of Sliced Quarterly, editor Ken Reynolds has had, in his own words, “an epiphany” (he’s deep like that). The original idea was that the first issue would be used to promote the comic, then subsequent issues could be downloaded for a small fee. With the critical success and viewer popularity of said first issue however, he realised that Sliced Quarterly is far more than just a commercial product. It’s premise, to offer writers and illustrators the opportunity to create one-off narrative strips on aspects of their lived experiences, has proved to be a magnet for artists eager to expand their repertoires. Reynolds, himself a writer of note, wants as many people as possible to see Sliced and ultimately allow contributors to “tell a story, to communicate an idea”.

Like Russell Crowe‘s Maximus, Sliced Quarterly#2 goes for the kill straight out the gate, with Chris Sides‘ wonderful “Self(ie) Obsessed”. The tale chronicles a week in the life of raging narcissist Jake, as he parties and poses his way through a series of increasingly unpleasant events. The strip is a 21st century Hogarth cartoon on the dangers of social media, though without the cosy comeuppance at the end. Artist Max Meier invokes a queasy claustrophobia in the sequence of “selfie” photos through which the story is told. The verisimilitude of the screen-grab posts is amazing. The panels are drawn as if through a fish-eye lens. Smiles become bare-toothed rictus grins of animal aggression. Laughter is always derisive, the sole preserve of the “lads” and never shared by the subject (victims) of their “bants”. One plaintive tweet, from a woman publicly humiliated by the group, simply reads “U R such a dick and not so funny”. Her words, along with others, are made all the more poignant for being an unhighlighted part of the stream of opinion, jokes, emojis and “likes”of the lads’ posts. These are the quiet, dissenting voices at the heart of the strip. It’s a masterful piece of storytelling – by turns funny, sad, scary and nuanced – asking many pertinent questions and allowing the reader to form their own opinions.

The rest of the issue maintains the discursive quality and element of surprise of the opening strip. There is is a strong sense that Reynolds has truly curated the collection of stories, placing each carefully into the sequence with an eye to maximising its impact. Black and white strips, such as Ben Peter Johnson and Freja Steele‘s impressionistic “I Am” and Kathryn Briggs‘ bittersweet slice of estate life “Wall Cats” have a grace and elegance when juxtaposed with brightly coloured strips. Rather than looking insipid, their subtlety can be properly appreciated.

In turn, the really colourful artists, such as Saffron Knight, get to delight and amaze rather than overwhelm – her double page spread of classically themed collages “Aphrodite Rescuer/Greek Gods At War” is gorgeous and as mysterious as an Eleusinian mystery taking place in Scooby’s Mystery Machine to the tune of Peter Andre‘s “Mysterious Girl”.

Another colour maven is Lukasz Kowalczuk, whose work I enjoy far more than his hard-to-spell surname. His story “Uncolorform”, a surreal tale of warring football hooligans, is a literal riot of fluorescent pinks and yellows. The simplicity of the decal sticker figures and character names like “Hatchett Tom” and “Stanley Dave” belies the nuance and wit of his storytelling. Let’s just say I’d love to see footage of the “true story” upon which “Uncolorform” is supposedly based.

Sliced Quarterly #2 gets the balance right not only in terms of artwork but also the kinds of stories it showcases. It’s lovely to see comics creators, often already known for zombie’s, monsters and aliens, taking their genre sensibilities and applying them to slice-of-life tales, the results proving remarkable in scope and imagination. Narrative driven tales such as the cool gambling chronicle “Sunnyvale Blues” (Iconnu James/Tom Merke) and Simon Mackie‘s heartfelt and moving tribute to his family dog “Rat” sit alongside high-concept pieces such as “Misenabym”, in which Daniel Ableev‘s pretentious novelist’s “secondary narrative embedded in the metadata” bears a striking resemblance to writer’s block (or the works of Jonathan Safran-Foer) and Bob Schroeder‘s inked artwork becomes a hilarious palimpsest of red and blue biro.

Other strips straddle both camps. David Thomas and artist Denis Vermesse collaborate in a poem about life, death and native wisdom, where human truths are revealed through masks, totems and dances that are themselves silent illustrations in a comic book; like psychedelic, man.

In “Spotlight On Installation”, regular contributor Ben Peter Johnson recounts a tale of lying naked in a coffin, waiting for his cue, during an experimental film shoot. “The casting is supposed to be raw, so I am in the raw”, explains the narrator, as the allure of high art is undermined by the smell of his singed leg hair. Anyone involved in creative pursuits will identify.

With Sliced Quarterly #2 Reynolds has really found form, offering stories that will fascinate, amuse, challenge and move even the most cynical among us. If you love comics, or even if you just quite like looking at quadrangular shapes, treat yourself to some of the most inventive people in the business trying something new and different.

We promise you won’t be disappointed.

Have you read Sliced Quarterly? What did you make of it? Let us know in the comments section below or send us a Tweet!