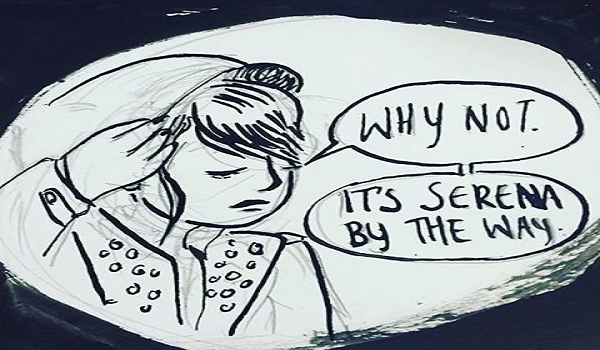 The Trade, written by Thomas Smith and illustrated by Katie Whittle, and currently funding on Kickstarter, is an interesting comic-book to say the least. The narrative starts off with the imagery of what appears to be a house that has caught fire. Due to the nature of the comic I was left believing that this was no accident and the work of a supernatural being, perhaps a Demon. The narrative then turns to the story of Serena, who wishes to get to know a barmaid who is serving her drinks. The barmaid reveals herself to be Alice and indulges Serena in her games and requests to hang out. The simple story of two girls getting to know one another soon takes a surprise turn when Serena reveals herself to be a Vampire!

It’s fair to say that The Trade lacks in its originality through the revealing towards the end. We’ve seen this story a thousands times but it is still too early to say whether or not it has any kind of pay-off because I haven’t seen enough yet. But this is where the problem lies, there isn’t enough story to chew on for a first issue/chapter. For the most part we see a conversation between two very different characters, which was good, don’t get me wrong.

The characters themselves are enjoyable to follow but the supernatural elements later on are left too late and leave you hanging in confusion as to the relevance of the overall story. What is The Trade actually about and where does it intend to go? These are questions that leave me hooked to find out what will happen next but not in a good way. I’m wanting these questions answered because I want to know what the hell is going on and whether I should be invested enough to continue.

I did mostly enjoy what I read of The Trade, mostly for the character interactions. Serena is clearly curious about the world around her and has a gentle soul, shown through her depiction of eternity and her inner demons. She doesn’t want the burden of immortality because she believes things eventually loose their meaning, and also doesn’t want to be a stereotypical blood-sucking Vampire.

Alice, on the other-hand, comes across as quite confident in her looks and attitude. It is interesting how they interact with one another and form a nice little friendship. The real test came when Alice is told the truth and she has to face the reality that the supernatural is real, and she is facing a Vampire. Her character swiftly changes as she has to back away for a moment and breath it all in.

I will admit that I was expecting some kind of twist from this encounter but my bets were on Alice being the supernatural entity and not Serena. But that did make the reveal more surprising because she came across as an innocent character and naïve whereas Alice appeared more powering and manipulative through her own games during the bar scene. I was convinced that Alice was some kind of Demon who eventually manipulated Serena to undertake some sort of demonic deal. So I was quite disappointed to see a Vampire reveal, especially when Serena doesn’t really change as a character even after the big reveal. It’s almost wasted on her.

The only cool thing we had seen is her leaping herself, and Alice, over the Zoo wall along with breaking a small coin. It would’ve been more interesting, and relevant, to see a scene where she had to resist her blood-lust in order to show her internal struggle to remain a “good” Vampire. The usage of exposition wasn’t the best choice but, at the very least, still got the point across, but it still would’ve been a bigger shock value to have something like I suggested above, making Alice’s genuine shock more believable. I know it was a sudden surprise to be lifted through the air but the reveal that she was a Vampire had little relevance with the actions displayed. She could’ve easily have been revealed as an Angel and it would’ve made just as much sense, if not more.

Also the imagery at the beginning wasn’t explained and that was the main thing I wanted answered. What did it mean and what relevance did it have to the rest of the plot? It was rather clever to end the issue on the note of Serena about to explain the origins of her transformation but this in itself is also a negative because like I said above, we haven’t been given enough information to have a sufficient narrative. We’ve had strange imagery at the beginning foreshadowing a horrible event, we have a meeting between two characters, which leads to a friendship, character insight and eventually a reveal of one of them being a supernatural creature.

There’s a few key events but they don’t go anywhere without the information that would follow. I think this introduction piece is too short and should last longer in order to give the reader more depth into the world, characters and tone of the story they are intending to delve into. For me personally I wanted to learn more about the mythology of The Trade. Most importantly, how the supernatural elements merged with the realistic backdrop.

The last element that left me rather confused is the choice in art-style. Now, it can be seen as quite an artistic approach, making The Trade unique in its edgy and non-focused display. But at the same time I am reviewing a comic-book, and one that is hopefully going to be funded and distributed to the general public. Because of this I have to wonder whether or not the art-style is best suited for a publicised product. It makes the overall product look quite unprofessional. I will admit that it represents the story rather well, matching its tone and atmosphere, and for that I have to give the art-style its credit. But at the same time I have to question its usage, along with the choice in keeping vital information out of the narrative. All these elements could potentially win over an audience or unfortunately alienate them.

Don’t forget that these are just my opinions and if you think The Trade sounds appealing to you then please show your support on Kickstarter. Also, feel free to express your own opinions in the comment section below or on our Twitter page!