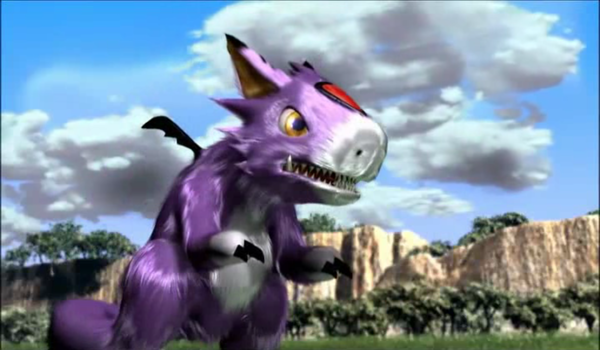 It is a good time to be a fan of Digimon. The six-part movie Digimon Adventure Tri is halfway done, and the third part “Confession” left be reeling with emotional trauma, and a new anime called Digimon Universe: Appli Monsters has begun and looks promising. Last year, we ran a miniseries called “DigiMonth”, looking back at all of the past seasons of Digimon. Well, we are continuing and wrapping up all things Digimon with a second DigiMonth, this time tackling the forgotten tie-in movies of the various series. First up to the bat, is the CG animated TV movie Digimon X-Evolution.

Digimon X-Evolution is a movie with no actual connections to any of the previous TV series, but a standalone picture released in 2005 on TV and crafted by Imagi Animation Studios. This is also the only visual piece of Digimon media that lacks any humans in it. It is a very particular film, the lack of said humans may put off audiences, and the fact that it is the only film that has yet to be dubbed in English.

The story is a story of survival, the right to live, and questioning one’s own existence, but the actual understanding of the plot is lost in translation. There are a number of important plot details which remain vague, and it may take multiple viewings to understand the whole story. It was inspired very loosely by the manga Digimon Chronicle, has a bit of a complex yet vague storyline, and a large cast of characters originating from the larger mythology of the franchise, or being references to the Digimon seen in past TV seasons.

The Digital World was created by the supercomputer Yggdrasil, but due to an overpopulation, the computer god decides to launch a pest control virus called the X-Program, which wipes out 98% of all Digimon. A smaller world is made, but a small handful of Digimon escape extermination, mutated by a vaccine called the X-Antibody, gaining new powers and appearances; thus they are X-Digimon. Viewing the X-Digimon as a threat, Yggdrasil dispatches the Royal Knights, Omnimon, Gallantmon, and Magnamon to destroy them. It is very strange seeing such heroic characters slaughtering their own kind because god says so.

Meanwhile, our protagonist, the lonely, amnesic fox-like Dorumon, who is an X-Antibody carrier, wanders the world trying to understand his purpose. He gets caught in the mayhem between the Royal Knights and a resistance group, coming to care for a baby Tokomon, but comes the target for Omnimon, the devoted figurehead of Yggdrasil. A lot of crazy things happen very quickly as the film jumps from point to point. Omnimon fights rebels WarGreymon and MetalGarurumon, Tokomon is killed but MetalGarurumon gives up his X-Antibody to resurrect him, Dorumon digivolves to join the fight, and then Gallantmon arrives, turning on Omnimon and deliberately lets himself get killed to do some research while as pure data.

Death isn’t really a thing of concern in this world, since the Digimon just come back later on without an explanation. I guess it is because they are made of data. The plot train hurtles on. Magnamon kidnaps Dorumon and Yggdrasil clones him to create an army of evil, mindless drones to wipe out the remaining Digimon. Dorumon then gets taken in by the rebels, including Wizardmon, Mummymon, and Silphymon, and a big fight kicks off between the group and the evil clone drones. And while this is all going on, Omnimon is starting to have doubts about his master’s goals. Gallantmon and MetalGarurumon both abruptly come back from the dead to aid Dorumon, who then ventures into Yggdrasil’s domain to confront the godly computer. Dorumon and Omnimon battle, but the former then digivolves into Alphamon, a long-lost Royal Knight, who convinces Omnimon to turn against his master.

The film does go through a wild ride and finishes in just over an hour’s time. It goes through a common routine of battle, talk, battle, talk, most of the dialogue being philosophical, though nothing akin to that of The Matrix. However, it does have a number of positives. The animation, most of the time, is very bright and fluid, but does lower in quality when it comes to the later battle sequences. Most of the non-battle sequences involve the Digimon standing around and talking without much expression or movement, but the details are crisp and lovely.

The entire Japanese cast are veterans of the franchise and reprise their character roles from past seasons. I particularly like Dorumon, who is a lonely figure but undeniably kind, and his relationship with the adorable Tokomon carries a majority of the film. The Royal Knights are complex for being designated villains. Gallantmon is openly against Yggdrasil’s orders, Magnamon just wants to do his job, and Omnimon is at first devoted to his master’s will, but his aloof sense of justice begins to crumble away over the course of the movie.

Digimon X-Evolution makes a decent movie, and is a fun piece altogether, but its importance and place in the Digimon franchise is virtually non-existent. Because it has no connections to the anime, and has never been translated to an English audience, it lacks the notability of its predecessors. However, it may double as a celebration of sorts to the franchise, featuring a lot of popular characters from past seasons, a stellar cast, and huge number of nods to the franchise. Seriously, how many times are they going to kill off Leomon? It is ridiculous!

Have you watched Digimon X-Evolution and what are your thoughts on this movie? Leave a comment below or on our Twitter feed.