Home » REVIEW: Papercuts and Inkstains #6 Is a Rollicking Fusion of Humour and Horror 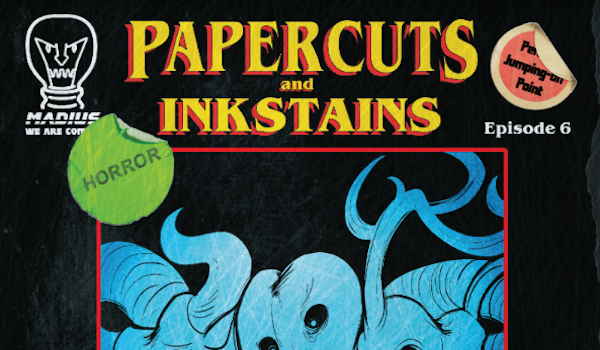 Let’s just start off by saying that the cover of the 6th issue of Papercuts and Inkstains is, thus far, my favorite of the series. As a 90’s baby whose only real understanding of the 80’s comes from the films of the decade, and the more recent ones taking place in the decade, seeing the monsters and characters of the issue showcased in VHS form was a great way to start the latest anthology. I think it’s safe to say that at least one person reading this has recently been one of the millions to have binged Stranger Things, so you’ll get what I mean when saying that this, “movie,” is likely one that Mike and the gang would pick up in between fighting the real versions of the monsters depicted. 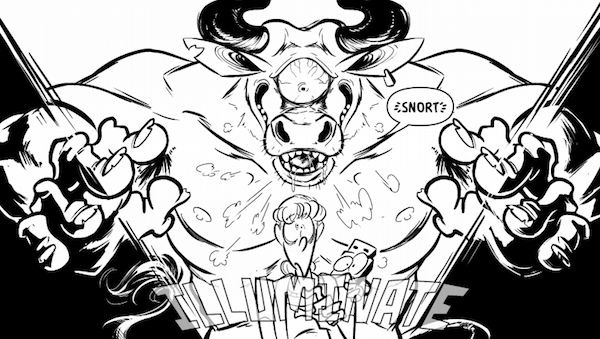 Having been an intern a few times in my life, I found, “‘Meat’ the Monotaur,” to be a bit less hyperbolized than one would expect from a tale with talking thumbdrives, paperclip goblins, and murderous monotaurs.

In past Papercuts and Inkstains reviews I have pointed out that the series’ greatest strength is the humor and digs that it aims at some of the more ridiculous realities of society. “‘Meat’ the Monotaur,” continues with this by emphasizing the sheer drama that comes with working in any sort of office setting. While there obviously aren’t any mythical creatures lurking in the basements of most office buildings, there are employees who flip out and claim the world is ending when the last dregs of coffee are gone.

Similarly, the story provides a very interesting look at the workplace hierarchy. Whether this was intentional or not is something that only Sambrook and Jones can answer, but from a reader’s perspective, I found the ease with which the managers and big-wigs threw the hapless intern into the literal bowels of hell very similar to some of the things I’ve witnessed in the real world

The general premise of the story is essentially just a heightened version of the well-known coffee run that the vast majority of interns have been forced to go on at one point or another. Unfortunately for Sylvia Jo, replenishing the office’s caffeine fix means circumnavigating all of the office villains guarding the fresh pot of coffee while simultaneously dealing with a mostly useless sidekick. It’s a fun take on office histrionics and is a bit like the grown-man’s Dora the Explorer, with Sylvia Jo using her backpack of goodies to complete a task that anyone with even a moderate IQ would find easy.

Sprecher’s art irks me to no end only in the sense that it reminds me so much of something that I can’t quite pinpoint (seriously, someone list every cartoon they know because it’s killing me that what I want to compare Sprecher’s style to isn’t making itself known in my brain). There is a feeling of nostalgia that I get from the visuals, reminiscent of some of the classic Sunday comic strips found in the morning paper. The visuals are more cartoony than realistic which pairs incredibly well with the high-stakes / low-stakes dichotomy of the actual events transpiring within each panel. 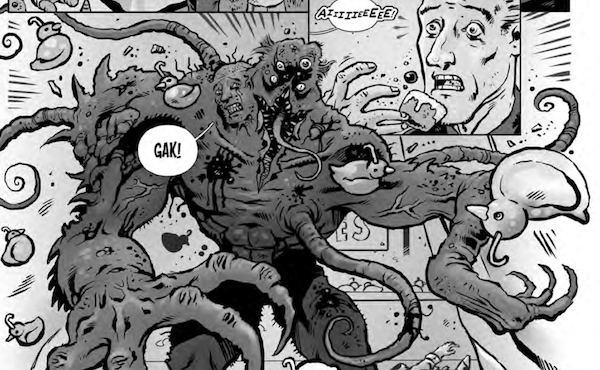 From my perspective, “Eton Mess,” was completely and utterly pointless… which is a good thing.

What made this story so entertaining is the fact that the entirety of it was so vague that, by the time I reached the end, I wasn’t entirely sure what, why, or how things happened.

Comic trickery at its finest because, due to my uncertainty that I had missed something, I read it again.

This is the kind of story that I think can epitomize the Papercuts and Inkstains series as a whole because it is a one-and-done. While there are some, “to be continued,” stories scattered within each issue, Papercuts and Inkstains is almost exclusively an anthology that provides a brief look into drastically different worlds… most of which touch on the mythical/horror/and downright weird genres.

“Eton Mess,” is one such story, focused on a small town in England whose inhabitants go from dealing with a mysterious cold to monstrous creatures terrorizing their picturesque street fair. As is (happily) often the case with Papercuts and Inkstains, the men of, “Eton Mess,” are nitwits and the women are the characters who actually get sh!t done. When the town seems to be completely overrun, and her male companion goes from being utterly useless to literal dead weight, protagonist Petunia Morley uses the combination of war knowledge and common sense to take out the remaining monsters running amok.

It’s a quick tale of the, “blink and you miss it,” variety and the end seems to come within an instant of the beginning. Interestingly, the resolution of the story is more final than one might expect from a tale that, as previously mentioned, is rather vague in its entirety. Assumingly, the mysterious cold plays into the transformation of people into creatures, but there’s no real definitive explanation for the occurrences. This is something that works well for the tale because, though it theoretically could continue on in some form or another, the loose ends that are left by the final page allow the reader to draw their own conclusions. 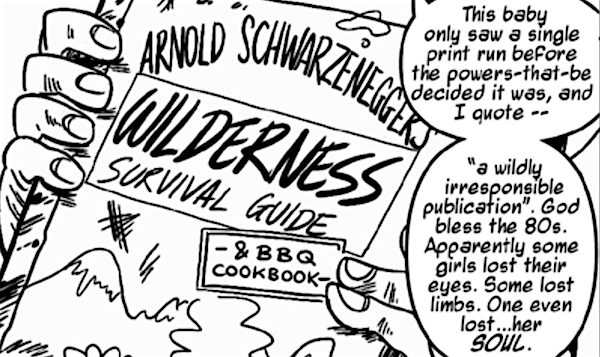 Let it be known that girl guides should never be messed with. Especially those who’ve gotten their hands on the Terminator’s 80’s survival guide.

Of the stories in Issue #6, “Where’d Wendigo?” felt the most like the classic horror tales that have been produced over the years. You’ve got the red herring in the form of a creepy older gentlemen, seemingly hapless young women alone at night in the woods, and a monster that seems all too keen to pick them off one-by-one. Having said that, the story takes the classic trope of a group of female friends venturing into the forest for one last hurrah and spins it on its head by actually making them competent.

There’s nothing more annoying to me than the stupidity of horror movie characters and, thankfully, “Where’d Wendigo?” decided to take an alternative route to its protagonists by actually giving them brains. The common sense and basic survival skillsets of our heroines, combined with survival tutelage from Arnold Schwarzenegger, prevails and allows the most badass girl guides in existence take on the man-eating wendigo and come out from the battle victorious.

It would have been fun to see the monster put up a bit more of a fight (his demise came fairly quickly after panels worth of build-up) but overall,  “Where’d Wendigo?” is a fun story that combines the humor, action, and grimness that I’ve come to expect from Jones and Sambrook, and Hanvey’s visuals only add to the pros list of the comic. There isn’t a ton of shading to the visuals, but I found that the stark contrast between black and white really accentuated the characters and their surroundings 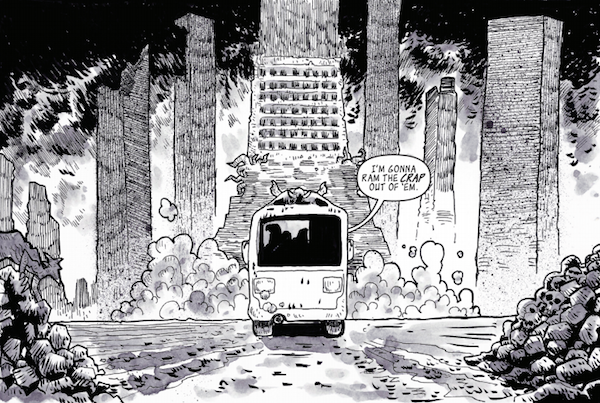 My favorite idiots have returned and are just as dumb as ever, and in multiple dimensions no less!

At this point, the Profits are really just the loveable friends that are so oblivious to everything that, even when responsible bringing about the apocalypse, I just feel the need to pat them on the head and tell them it’ll be okay.

It’s hilarious that these bozos are fine with summoning a chaos demon to rule the world but, throw in a hellbeast spouse and a couple of dimension-shifting portals and suddenly things have gone too far. Also, the modicum of pride that these guys still have, whilst floating through, “David Lynch’s outtakes,” for successfully summoning such a chaos-wreaking demon is so like them. With all of the death and destruction that has occurred, the fact that dealing with other dimensions and portals are what serve as these dummies’ breaking point is so typical.

This instalment felt a bit like the filler episodes of television that you know exist for the sole purpose of leading up to the big climax. The characters did get from point A to point B, but the interim period didn’t necessarily provide anything to move the story forward. BUT, while not a ton happened in terms of the overarching plot, it’s not really the plot that has held my attention over the six issues anyway. The Profits are characters that are genuinely entertaining so, while their journey this issue was concise in terms of the story as a whole, the panels upon panels of mindless bickering was still wholly wonderful to read through.

Perhaps the best aspect of this instalment of, “Profits of Doom,” is Mike Smith’s visual contribution. The multiple dimensions and portals allowed for a wide array of images that managed to distinguish each alternate universe through drastically different drawing techniques that showcased Smith as a creative talent. While his visuals have always been Grade A (I’ve always had an affinity for the Profits aesthetics) it was nice to see some variety in this issue with each dimension clearly discernible through image alone.

Issue #6 was another win for the minds behind Papercuts and Inkstains. It was another successful combination of humour and horror, as well as mythical and realism, and once again provided a little bit of everything. As I’ve said before, this series is one that can be picked up and enjoyed at any point in its run. The majority of stories are one-shots that are quick enough reads to remain entertaining before hitting the point where people become disinterested.

Be sure to head on over to the Madius Comics shop to get your hands on the first five issues of Papercuts and Inkstains and keep your eyes peeled for when this one hits stands! Keep track of all of the Madius Comics updates by following the gang over on twitter!