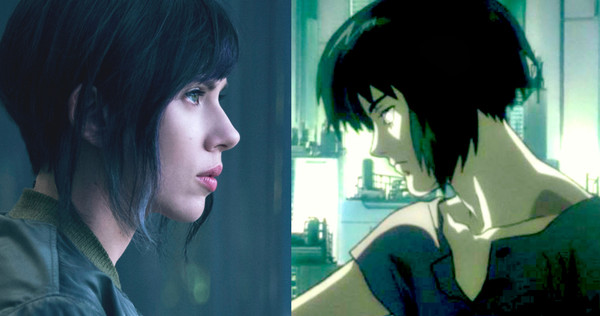 Hollywood has always struggled to understand and adapt Japanese manga to film, but hope is on the horizon in 2017, judging by the first trailer for next year’s Ghost in the Shell. Now, for me, there was immediate excitement, especially when Scarlett Johansson was announced to be playing the protagonist Major Motoko Kusanagi. I have rewatched the trailer continuously, feeling more excited with each viewing. We were teased with teasers of the trailer, hinting at a faithful adaptation. The film has even gained a blessing from the 1995 film’s director Mamoru Oshii, so things are looking up.

However, there has been the expected accusation of racism and whitewashing the cast, but I believe it is unjustified, considering that the world of Ghost in the Shell is based around cyborgs and a theme of self-identity. Nevertheless, what immediately stands out in the trailer is the visual wonder and faithfulness from the anime. The film is directed by Rupert Sanders, who previously directed Snow White and the Huntsman, another visual treat but lacked substance. Hopefully, Ghost in the Shell will not suffer the same fate.

Now, for those of you not in the loop, Ghost in the Shell began as a Japanese manga created by Masamune Shirow, later adapted into the iconic 1995 animated film, and the two respective anime Ghost in the Shell: Stand Alone Complex and Ghost in the Shell: Arise. It is best known for its memorable visuals and cyberpunk elements, partially inspiring The Matrix.

In the near-future, humanity and technology have both evolved so that cyborgs are now commonplace. Their bodies are referred to as “shells”, and their minds/souls as “ghosts”, enabling survival outside the body, existing within virtual reality, and computerized minds to be hacked and altered. Our heroine, the Major, works for the cyberterrorism government Public Security Section 9, and is a full-fledged cyborg to the point her body isn’t her original. The story obviously alters with each incarnation, but remains focused on the agents of Section 9 countering cyberterrorism and questioning the philosophy of the cyberpunk genre.

The trailer implies the film will be an amalgamation of the franchise. Kusanagi appears to be actually called “Major” rather than it being a title, a newly created one-of-a-kind cyborg whose life was allegedly saved by the Hanka robotics corporation to be a public servant. However, the Major is isolated and disconnected from the world judging by Johansson’s dialogue, the character visiting what looks like an escort for at least some form of “connection”. Notice how they deliberately put in the clip of Johansson kissing another woman. Ever eager to attract the masses in any shape or form, eh, Hollywood.

The film’s antagonist, Hideo Kuze (Michael Pitt), briefly glimpsed towards the end of the trailer, appears to be the keeper for a great secret – claiming the Major’s benefactors are not as benevolent as they appear, implying Kusanagi’s life was not saved but rather “stolen”. I suspect the film will involve Section 9 going on a campaign to stop Kuze, only for the Major to discover a dark secret, bringing her to question those she trusts, including her friend and partner Batou (Pilou Asbæk) and superior Chief Daisuke Aramaki (Takeshi Kitano). There are also glimpses of a mysterious group of monks, with the final shot of the trailer involving the Major coming across a ring of monks all connected to a mass network of cables. Curiouser and curiouser.

It can be said the visual replication of the anime is astonishing. Just about every scene is taken straight out of the manga or the various anime. In a mixture of the two movies, the opening sequence involves Geisha gynoids assassinating a group of men, only for the Major to strip off, leap off a rooftop and crash in through the window to take out the murderers. However, if audiences are expecting something raunchy involving Scarlett Johansson, guess again. Though the Major does spend a majority of her time naked in the animated film, I suspect this film will be PG-13, and judging by the design, the Major’s body is clearly robotic and simple in design.

We also see the Major using her thermo-optic camouflage to battle and kick the ass of an opponent in a scene taken straight out the original film. Even Batou’s cybernetic eyes remain in tact. However, like the trailers for The Last Airbender and the Attack on Titan films, the trailer nails the visual aspects of Ghost in the Shell but may dither or what truly matters. Warcraft succeeded in capturing the visual department and mythos of the video game franchise, but failed on creating an interesting story and characters. I also worry it will skip out on the more philosophical and social elements of the series in exchange for just the creative action sequences.

However, I intend on remaining optimistic about this film. The thrill of actually having a new Ghost in the Shell movie is an ecstatic one. Obviously, there does remain the issue of the alleged whitewashing of the franchise, which serves as a larger problem in Hollywood. Recently fingers were pointed at Doctor Strange for whitewashing, changing the Ancient One from a Tibetan man to a Celtic mystic played by Tilda Swinton. Doctor Strange’s director claimed he made the casting decision to evade Asian stereotypes, while admitting he had chose the “lesser of two evils”. This is a delicate subject and I’d prefer it not to cloud the potential of this new movie.

What are your thoughts on the Ghost in the Shell trailer? Do you think it will honour the franchise, or be a failure as so many recent adaptations have? Leave a comment below or on our Twitter feed.