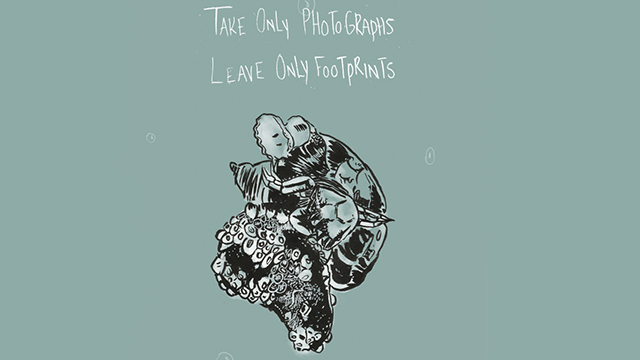 Being that the arts are a great place to make commentary on real-world issues, it was only a matter of time before an environmentally-themed comic came across my desktop. Take Only Photographs, Leave Only Footprints is chilling, cautionary tale of the dangers of mistreating the environment. In a comic book world dominated by superheroes and explosions, this, at face value, may not seem too exciting, but writer Tom Smith and illustrator Katie Whittle have put their considerable talents together to create something just as entertaining, moving, and definitely more thought-provoking than any big name comic you read this week.

Like many horror stories, Take Only Photographs, Leave Only Footprints starts out simply and mundane. Our protagonists, Ben and Kate, are a loving, quirky couple who are spending time at a beach. They watch the sunset, they cuddle watching the waves come, they joke with one another; you know, the stuff couples do before something awful is about to happen to them in a story.

Upon arriving home, Kate discovers that she accidentally took some live barnacles home from the beach. Ever the caring person, Kate requests Ben take the barnacles back to the ocean so they don’t die. Ever the jerk, Ben decides to just flush the barnacles down the toilet unbeknownst to Kate. At this point, the story takes a turn for the horrific and chilling as the couple, and soon the town, is haunted by the consequences of Ben’s actions. Kate and Ben hear unsettling noises throughout the night and a foul odour begins to fill their apartment. Kate lies awake at night, feeling guilty even by the possibility that the barnacles may be dead.

What begins as only a localised terror for the couple soon grows larger as Ben and Kate start noticing peculiarities amongst their coworkers and neighbours. People, including Ben, start sprouting barnacles from their body and begin to have a strong inclination to “go down to the beach.” I won’t spoil the ending, but rest assured that the final frame of this story will leave you shocked (and having second thoughts about every interaction you’ve had with the environment in your life).

Smith and Whittle together have created a stellar comic and praise can be equally give to both. Whittle’s artwork is where the true horror of the story comes from. Her grotesque artwork produces some truly hard-to-look-at images that will make your skin crawl, but also some very beautiful frames that exude tons of emotion. Smith should be praised for being able to put forth such a strong environmental message without seeming excessively preachy. Though this is clearly a story with a message, and Smith is very upfront with that fact, there is very little about the story that makes you feel that Smith’s viewpoint is being shoved down your throat. A few lines wax a little overly poetic on human’s wrongdoings and showing humanity to all creatures, but within the story (and the character’s mental states), one would be hard pressed to call these moments “on-the-nose.”

Putting together something that balances entertainment with a strong message has always been somewhat of a Rubik’s cube in the art’s world. One may alienate their audiences, not convey the message correctly, or worst of all, make boring art. Lucky for reader, Take only Photographs, Leave Only Footprints is not one of these missteps. For a comic that provides style and substance, check this one out.

What do you think of comics with a message? Sound off in the comments or send us your thoughts on Twitter!