Home » REVIEW: Dalí Envelops You With It Surreal Nature 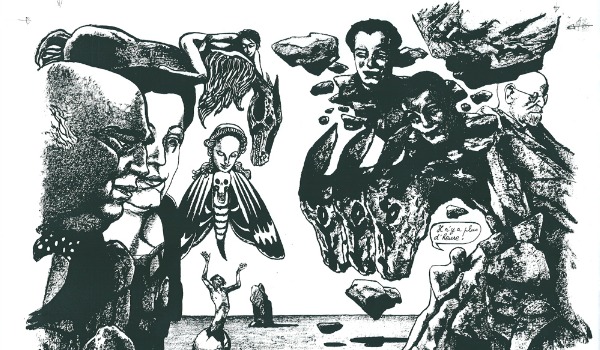 I have this gut-wrenching feeling that one day, just maybe, SelfMadeHero are going to send me a comic that doesn’t fill me with wonder and delight. Not every one of their comics has won me over in an instant, but I can honestly say I’ve never been bored by a SelfMadeHero comic. Ever the keen folks that they are at biographies, surrealist artist Salvador Dalí is the latest figure in popular culture to receive the biography treatment from SelfMadeHero. And what a wondrous and delightful biography it is. Dalí is a mystical, hypnotic trip of a comic. An introductory flick through the comic shows how that the pages are stuffed with insane art from writer/illustrator Baudoin. Not only do they match Dalí’s own style, but they’re in danger of collapsing under their own mad weight.

After the colossal juggernaut that was Munch (the comic equivalent of a Led Zeppelin/Pink Floyd album orgy), I had assumed the publishers wouldn’t be able to better themselves with such immersive stuff. Despite this, Dalí manages to succeed on that immersive level, even with some striking similarities to Munch. For starters, both are biographies about artists. Both share sublime art, both break the fourth wall, both emphasis the tortured family/love lives of their case studies. But Dalí doesn’t read like a rehash of Munch. Where Munch felt like a brick to the head, Dalí feels like a really weird dream. Compact, but not smothered. Stuffed, but not rushed.

Across a nimble 136 pages, we glide through Dalí’s career, and come out of it without knowing a great deal more about the character than your average Dalí expert may already know. Dotted throughout, there’s speculation and interpretations of Dalí’s art itself, but in general, Dalí doesn’t criticise or celebrate the man, it simply encapsulates his legacy as a stirring individual amongst the creative worlds. What is celebrated however is the art of Dalí himself, Baudoin does a jaw-dropping job of taking Dalí-esque landscapes, sketches and caricatures and moulding them into his own package. If anything, Dalí can be digested as a bite-size tour-de-force of the artist’s long-lasting appeal, but Baudoin dishes out a few clever tricks with the comic.

Before reading this comic, I can’t say I was all too familiar with Dalí’s life. I knew vaguely of his work – the melting clock painting, right? Baudoin takes his Dalí-like art and uses it to galvanise everything about Dalí that he can get this hands on. From the all-encompassing vibes of victory as Dalí paints several of his best-known works to the tense uncertainty of his travels across Paris and America, meeting fresh, famous faces whilst littering wherever he travelled with his art, little is left untouched. Most heart-breaking of all is the tragedy of the death of his wife, Gala. The way in which Baudoin presents Gala’s passing defines Dalí‘s most appealing aspect. Presented as a surreal spirit with multiple faces, melting into the high, blue sky, with one face cast downward at the desolate town and calm seas below. Dalí throws a slab of odd sublimity at you at the most unexpected of moments.

Dalí is a deeply intriguing portrait of a troubled soul. I think this is going to become my favourite of SelfMadeHero’s Art Masters comics to date. A mesmerising comic such as this deserves to be a definite highlight in SelfMadeHero’s continually vast and diverse output. It’s dexterous pace and fascinating artwork make it a rich, vibrant portrait of one of the 20th century’s most fascinating figures.

Have you read Dalí? What did you make of it? Let us know in the comments section below or send us a Tweet!