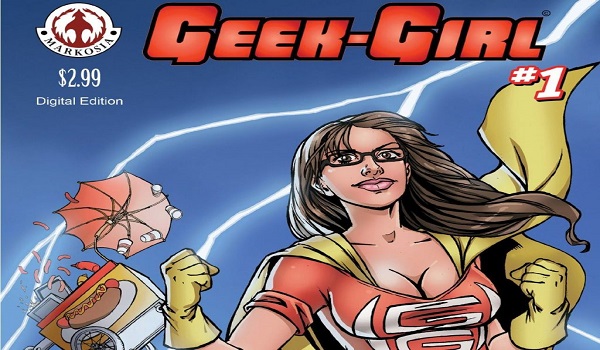 When we meet the titular character in the opening pages of Geek Girl, she is clumsily flying around before landing into danger. It’s clear she’s unfamiliar with her incredible power and wears a costume that looks like fairly simple cosplay. And living up to her heroic name, her “disguise” is a pair of glasses. We learn that the glasses are the source of her power, even though they’re hardly a disguise. There have been several meta approaches to the superhero genre, such as Kick-Ass, and all present their heroes as naive, regular people taking on more than their capable of. The character Geek Girl has a similar appeal as Spider-Man; both are relatable young people who balance their heroic adventures with more mundane day-to-day responsibilities. As her name indicates, Geek Girl is, simply, a geek and her social ranking is as much a battle as any villain.

Geek Girl comes across fellow hero Neon Girl who is attacked by a strange woman shooting lightening bolts. Already we see that this is a world where Geek Girl is not the only superhero with unique abilities. We then go to the hospital where Geek Girl, whose real name is Ruby, visits a terribly burned Neon Girl. It is then that we quickly see the origin of Geek Girl through flashback, suggesting she came across the glasses after a few drinks and a game of strip poker. The glasses give Ruby super strength and the ability to fly, though her clumsiness proves them more of a challenge than anything.

Where Geek Girl, written by Sam Johnson and illustrated by Carlos Granda, really hits its mark is the societal context Ruby is in. The best scene of the comic takes place in an eatery where Ruby is ridiculed by her judgmental “friends.” When they ask to see her glasses they remind her how much of an inconvenience they made when she knocked drinks over the previous night. Then they provoke her enough to force her to turn the table over. If that wasn’t bad enough, they make it clear how costly her powers are by the amount of damage she’s causing. Even without the superpower framework, this is how high schools kids act. Which means teenagers are mostly garbage people. With or without her glasses, Ruby truly is a geek girl.

After this episode, another superhero who goes by Pit Bull enters the restaurant. He’s met with applause and talks of drinking brewskis and whiskey. This further highlights Ruby’s social ranking as even superpowers can’t make her more liked. Pit Bull, who seems as much a doofus as a big, dopey jock, gets the benefit of the doubt that Ruby can’t. There’s a lot to explore here that hopefully future issues will go into. The comic ends with the unnamed lightening bolt girl showing up and Pit Bull and Geek Girl teaming up for the fight. Whether or not this leads to a partnership has yet to be seen.

For anyone who is a geek (which might be most people reading this or any comic) they can understand the struggle of cliques and groups in high school. Geek Girl does have similarities to Spidey but that’s not entirely a bad thing. People at least think Spidey is cool whereas even Geek Girl doesn’t have that reputation. There’s a lot to say about adolescence and social status that intrigues me to read the next issue and see what Johnson and Granda have in store.

What do you think of Geek Girl? Let us know in the comments or on Twitter! You can grab your copy of Geek Girl from Sam Johnson’s website here!