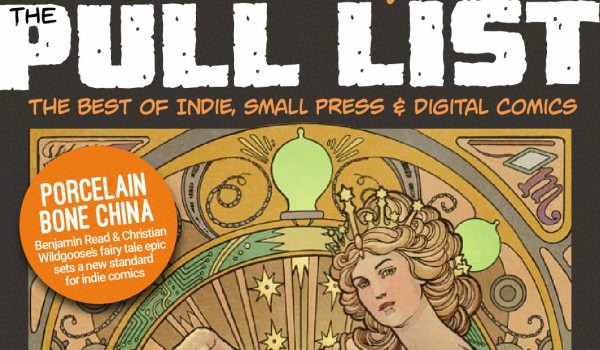 As hard as it may be to believe, there was a time when fans didn’t communicate with each other and express their opinions of comics via the internet. Before blogs, Twitter and podcasts ruled the indie comics landscape as they do now, there existed such a thing called the ‘fanzine’, a homemade magazine produced by and for fans. Comic books, science fiction, punk rock – so many sub-genres of popular culture had their own fanzine.

Our good friends at Pipedream Comics are now bringing that method of encapsulating comic fandom back to life, thanks to the introduction of The Pull List, a fanzine dedicated to bringing you the best from the world of indie comics. So far, Pipedream Comics have put together five issues of the fanzine, which you can buy digitally here, as well as a special print version of their most recent issue. Each issue contains a wealth of reviews covering all the hottest indie titles on the scene today, feature pieces celebrating indie comics in general as well as interviews with comic creators themselves.

Pipedream Comics editor and founder, Alex Thomas, is keen to make The Pull List a standout hub for indie comics coverage: “Since we launched Pipedream Comics in 2011, we have been constantly inspired by the can-do attitude of indie comic creators and wanted to help spread the word of the digital comics revolution.

“With the increase in digital comics sales, there is now a vibrant and exciting indie and small-press community pushing the boundaries of what can be produced, and we wanted to share that with the world. The Pull List combines our passion for comics with our expertise in making magazines to create a new title that blends fanzine attitude with newsstand production values and creates something as amazing as the comics we see being launched every day!”

Between the five issues so far produced by Pipedream Comics, the creators featured are wildly diverse. From well-established creators such as 100% Biodegradable‘s David Haliwood and Mike Garvey to newer talents such as the Comichaus team, Big Punch Studios and Galaxafreaks creator Andrew Pawley. No matter the creator though, they all offer fascinating insights into their work, which perfectly accompanies the various reviews and features included in every issue. All of this is perfectly put together too, with each issue lovingly detailed and structured in its presentation, along with some sublime cover art provided by a creator often featured in the ‘zine.

If you’re a fan of indie comics and want to see how the modern indie comic culture is condensed into a digestible medium, then The Pull List I’d heartily recommended. It may take the form of a bygone era of comic appreciation, but rather than feeling like a slab of history caked in dust, it feels like a step towards fresher methods on how we can show our love for independent comics.

You can check out all The Pull List‘s issues here via Pipedream Comics’ Gumroad store, which includes issue #1 being sold entirely for free! Print editions of The Pull List #5 can also be bought at selected comic retailers across the country, including Spa Town Comics in Leamington, Gosh Comics in London, Excelsior Comics in Bristol, Komix! in Melksham, Orbital Comics in London, Travelling Man in Manchester, York and Newcastle and via the Comichaus website!

Are you a keen reader of The Pull List? Let us know in the comments section below or send us a Tweet!