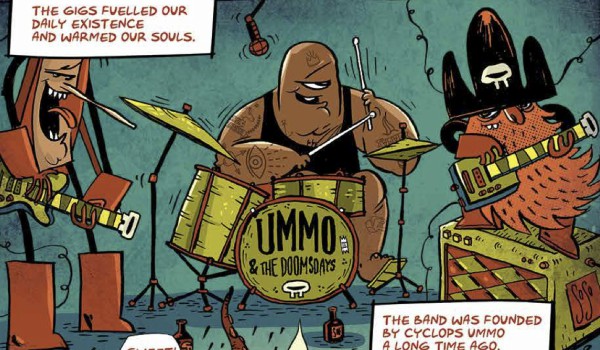 We’ve all been in the following situation: You’re relaxing with your friends around a campfire, cooking sausages, after an evening of rock’n’roll adventures. Quite unexpectedly, a portal appears out of nowhere, bringing with it an army of monsters that you and your pals become forced to do battle with. I mean, how else is such an evening with your chums supposed to pan out?

The most charming aspect of Norbert Rybarczyk‘s brief comic, Staring from the Hills is its offbeat, deadpan humour. We swing from the domestic to the destructive in the blink of an eye. One moment, an anthropomorphic spider and mole are dozing beneath a snug, moonlit sky, contemplating their philosophical thoughts, before spending the rest of the evening with their ears turned up to eleven at a rock gig. Eventually, it turns out this power trio of a goblin, dwarf and cyclops are firm friends with our mole and spider protagonists, they’re varying nature in species having no impact on the strength of their friendship.

This rough, bizarre take on the value of friendship might feel out of place in other hands, but Rybarczyk wisely opts for the short option. Clocking in at a mere 40 pages in length, we’re not given the opportunity to question the genesis of how this rag-tag group of mutant friends came to be. That’s not the focus here, the focus is the immediacy of their friendship. It’s that dry lack of pretension that makes Staring from the Hill a sweetly energetic read. The artwork is an absolute blinder. Rybarczyk’s skills in crisp colours and wild atmospherics lend the comic a sense of youthful urgency that blends well with the comic’s short run but also gives the action-driven elements a good bit of punch and kick. Whether its Ummo and the Doomsdays burning through riff after riff, or the aforementioned monster invasion kicking into overdrive, there’s a real frantic nature to how Staring from the Hill looks.

Staring from the Hill isn’t a masterpiece, but it is a masterful execution on how damn cuddly friendship can be. Aside from all of these caricatured creatures being friends with each other, and a few of them are in a band, I know little about their backgrounds or their personalities and yet I want to go start a campfire, eat some sausages, and kick some monster-butt with these guys. Staring from the Hill might be compact, but it still manages to suck you in thanks to its cracking artwork and playful characters. Rather than act as a revelation about the subject, this comic is an adorable reminder that friendships can come in all shapes and sizes, that’s what friendship is about after all – no boundaries.

You can find Staring from the Hill along with many other great comics from publisher Centrala’s website here! You can also catch Centrala at the forthcoming South London Comic and Zine Fair on Saturday the 15th of July. Follow them on Twitter for more info!