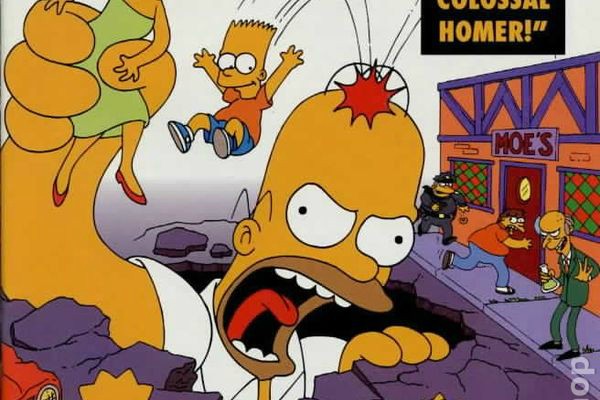 Simpsons Comics #1 shows the benefits of these test runs. The story is cohesive, the art is crisp, and the familiar Simpsons’ visual jokes are all there. Mr. Burns descends into his secret underground lair and we see skeletons buried in the earth beside the elevator. The next page shows his screen of security camera feeds. In one, a vandal tags the camera, in another, a U.F.O hovers above the cooling towers. The comic is not as brilliant as the show was in the 90s, but it feels like Simpsons. Writer Steve Vance and artists Bill Morrison, Tim Bavington, and Cindy Vance do a great job of conveying the feeling of The Simpsons though none had worked on the show previously. Unlike many tie-in comics, this inaugural issue understands its source material thoroughly, though it tweaks it a little bit.

The plot of the issue’s main story, ‘Homer Finally Bulks Up!’, is simple; Mr. Burns turns Homer into a giant while testing a youth ray. Homer goes on a rampage, and is eventually stopped by a syringe shot out of a cannon. This alone sets the comic apart from the show. The Simpsons television show was never completely realistic, but in their first decade they always hewed close to reality. Aliens, magic, and other fantastic elements were the parlance of Treehouse of Horror and dream sequences. Sure, Flanders got the help of god occasionally, and one time Homer turned into an irradiated monster, but the plots were never driven by supernatural occurrences. By opening with a supernatural story, The Simpsons Comics #1 signals that it is going to use the format to do things that the show won’t or can’t.

The second story is a short six-pager where a wealthy collector, played by Homer Simpson, gets trapped in his climate controlled storage area and has to burn his comics to stay warm. It is reminiscent of an early Treehouse of Horror episode and employs a similar dry humor, with mixed results. That said, the demented look in The Collector’s eyes as he gazes on his burned treasure is priceless.

Overall, Simpsons Comics first issue is still finding its legs. Still, it plays well with the style of the source material, and uses the medium to good effect, stringing together still images in a way that might have seemed a bit clunkier in animation. The dialogue is authentically Simpsons, and the stories skip along briskly. It is nothing genius, certainly not in the same league as what the show was doing at the time. Still, it represents the start of something big.

Are you a fan of Springfield’s most famous family in comic form? Let us know in the comments section below or send us a Tweet!