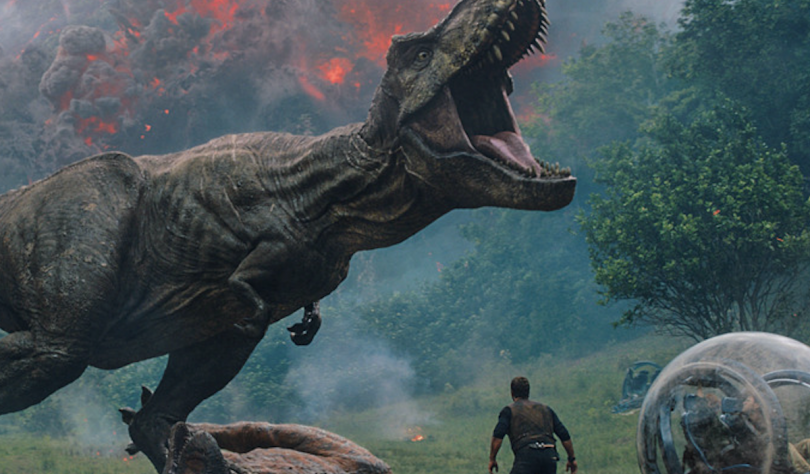 The Jurassic Park films have always been silly when it comes to its scientific accuracy and serious storytelling. Most people are just there to watch the dinosaurs eat people. Still, these films are always crowd favourites and Jurassic World revived the franchise well enough. Now, the sequel, Jurassic World: Fallen Kingdom, has big ambitions, an absurd plot, yet also a few rare moments of actual tension and sentimentality. It also relies heavily on contrivance and convenience, though what else is new in a silly franchise about genetically-cloned dinosaurs?

Disclaimer: The following review contains spoilers for Fallen Kingdom and Jurassic World. Read at your own risk or face extinction!

As you may recall, Jurassic World ended with the closing and abandonment of the theme park thanks to a rampaging Indominus Rex. There was also some conspiracy to turn the dinosaurs into military soldiers and scientist Dr. Wu (B. D. Wong) had some ulterior motivation for creating the dinos. All that being said, this secret conspiracy doesn’t really get much focus in the sequel. At least not in the way it was being set up as. 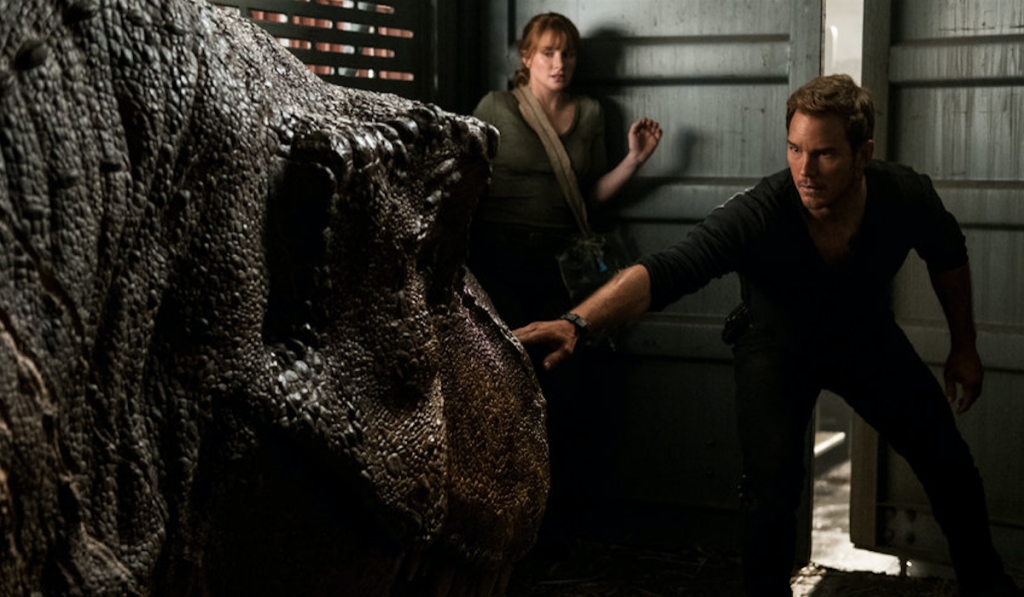 Instead, the film opens with the revelation that Isla Nublar’s conveniently dormant volcano is now about to erupt and wipe out all the dinosaurs. Um, when was there ever a volcano on this island? And why would John Hammond choose this island to build his theme park on if there was a goddamn volcano? Then again, Isla Nublar is prone to tropical storms, so how much worse is a volcano anyway? There is some debate as to whether or not to save the dinosaurs or let them go the way of, well, the dinosaurs. Good old Jeff Goldblum cameos as Dr. Ian Malcolm to preach more about nature and chaos. I was hoping he would have a larger role; the marketing sure as hell built it up as such.

Claire Dearing (Bryce Dallas Howard), Jurassic World’s former manager, is now a pro-dino life campaigner. She becomes involved in a plan to rescue the dinosaurs before the eruption and place them in a new mainland sanctuary. What, is Isla Sorna out of the question? At least it gets a passing mention in the film. The plan is being arranged by Eli Mills (Rafe Spall), aide to Benjamin Lockwood (James Cromwell), who is retroactively introduced as the former, estranged business partner of Hammond who helped engineer the dinosaurs. They broke ties through what amounts to an underplayed and brow-raising revelation, a twist not worth the reveal. Mills has a particular interest in saving the Velociraptor “Blue”, prompting Claire to recruit Blue’s tamer Owen Grady (Chris Pratt) in her mission. 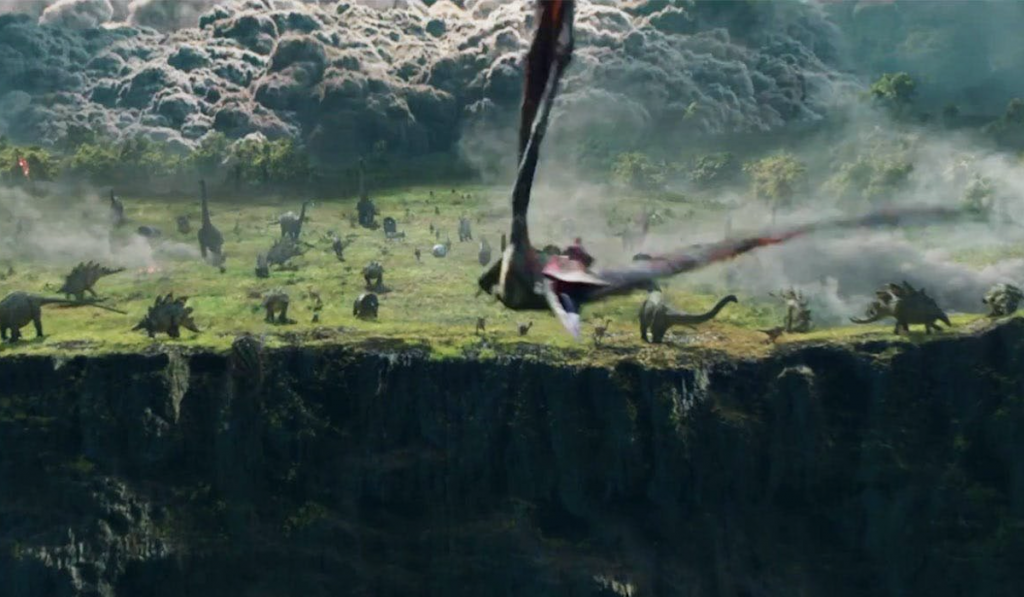 The group return to Jurassic World, accompanied by mouthy dinosaur doctor Zia (Daniella Pineda), shrieking tech expert Franklin Webb (Justice Smith), and a gang of mercenaries led by Ken Wheatley (Ted Levine), who is basically Pete Postelthwaite’s character from the second film minus common sense. The gang find Blue, but surprise, surprise, the mercenaries and Mills turn out to be evil. They aren’t saving the dinosaurs for preservation, but to instead sell them off in an illegal auction for profit. This is where the film is starts to feel like a direct copy of The Lost World.

However, how the film deals with animal preservation works a bit better than in The Lost World; instead of simply being shipped to a zoo, here they face extinction or animal slavery. Nice choice. So, when the volcano actually goes off and the dinosaurs start running without anywhere to go, the viewer wants them to get away. I even found myself tearing up a little at those shots of the original Jurassic Park literally going up in flames. But, it is meant to double as a symbolic representation of how large the series’ scope has become. 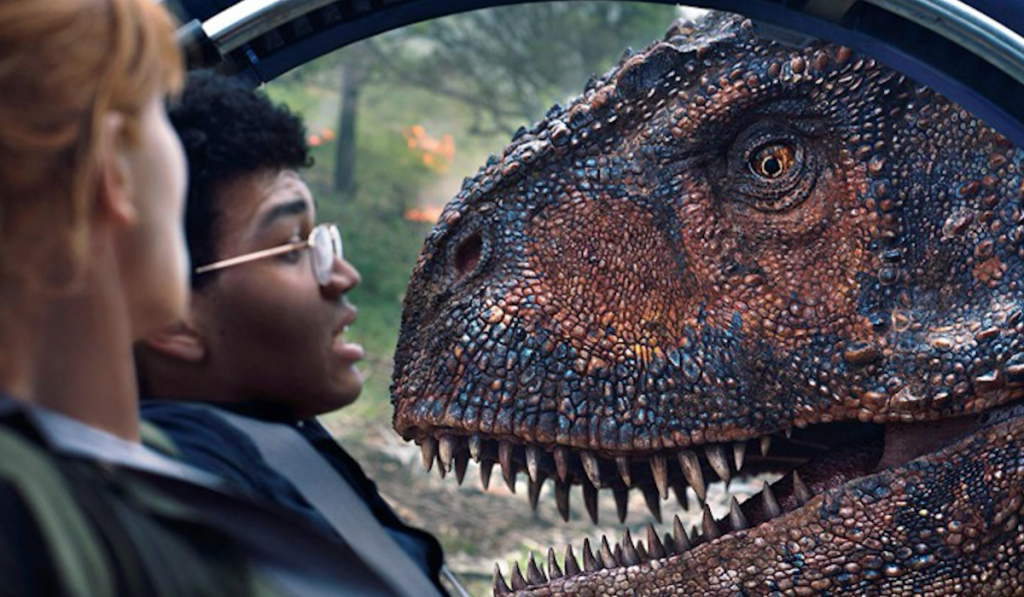 Owen and Claire race to save the dinosaurs from the auction, hosted by a delightfully hammy Toby Jones. Meanwhile, Lockwood’s enigmatic granddaughter Maisie (played expertly by Isabella Sermon) discovers that Mills is in league with Dr. Wu to continue their schemes from the last film. It turns out that Wu has a very large secret laboratory beneath Lockwood’s mansion – which Lockwood doesn’t even know about. How is that even possible? Dr. Wu has been busy, using an Indominus Rex bone to create another super dinosaur, the Indoraptor, as the prototype for a line of trained, obedient dinosaur soldiers. Blue is meant to bond with the Indoraptor as a mother to complete Wu’s experiments, but Mills is all too eager to flaunt the new monster to the auctioneers.

Every bad guy in this film, save Dr. Wu, appears to have taken stupid pills. They work with big, scary, flesh-eating dinosaurs, and yet the characters do increasingly idiotic things to aggravate them. There is one moment where one character pretty much signs his own death warrant, locking himself in a cage with a dinosaur playing possum. What a prat! The lack of security amongst the mercenaries is undeniably noticeable. Our heroes just waltz right into their base. 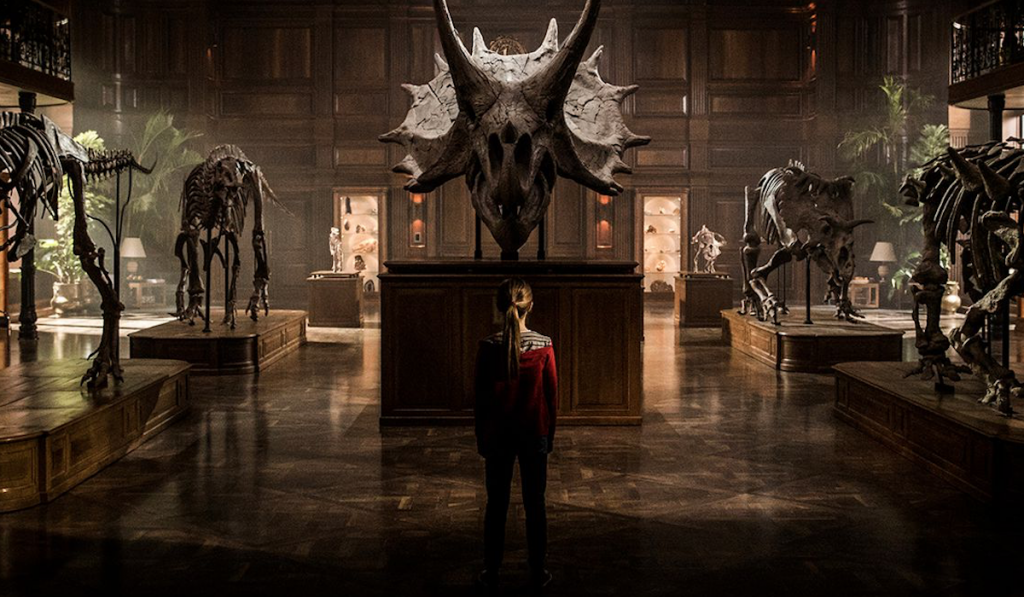 There are some great moments with the dinosaurs. Once upon a time, watching dinosaurs eating people was scary, but now, it is more of a funny highlight. Characters are not victims anymore and  all get hilarious, karmic deaths. But this time around, the dinosaurs are the victims. The overhanging theme of the film examines how its characters make choices and deal with the consequences of the past films. Should nature take its course and let the dinosaurs die again or should mankind intervene? There is a genuine sense of sympathy towards the monsters, who are out of their time and dragged out into a world that has evolved without them.

Though the main plot is complete nonsense, the film has great themes and moments of spectacle. It comes with a wonderful score composed by Michael Giacchino. The aforementioned escape from Isla Nublar and its destruction are genuinely moving. The Indoraptor turns out to be a lot more intimidating than the Indominus Rex, culminating in a tense as hell final act. The tone of the film shifts to genuine horror as this monster stalks a terrified little girl, paying homage to Nosferatu along the way. The sequence rivals Jurassic Park’s original scenes of the Tyrannosaurus Rex’s debut and the Velociraptors chasing Hammond’s grandchildren in the kitchen. 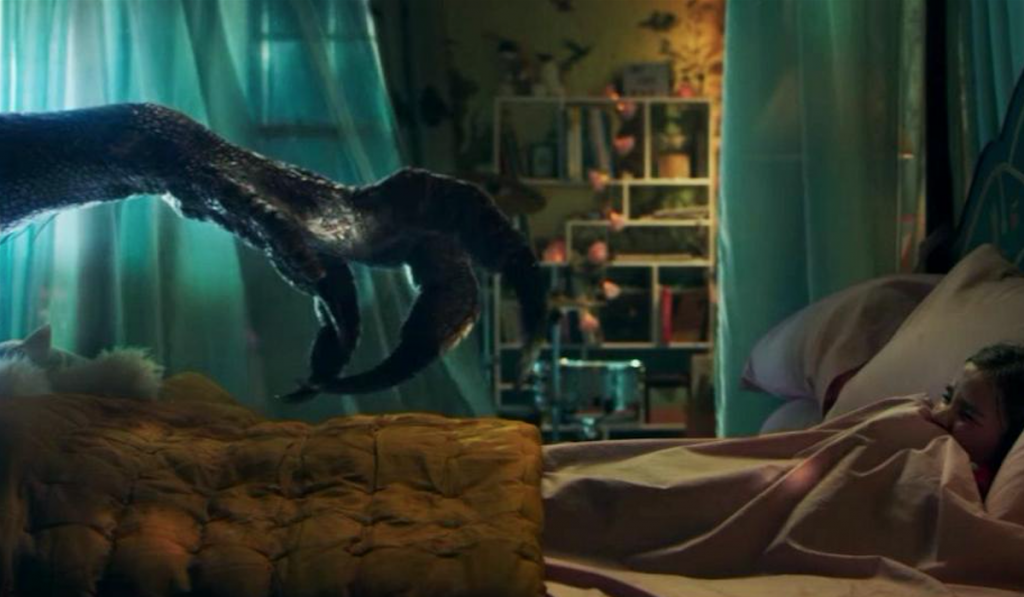 Jurassic World: Fallen Kingdom does fall into some big holes, including a few which made me question the absurdity of it all. Still, it definitely kicks the door open for where the Jurassic Park franchise could go. Isla Nublar is destroyed, so returning to that familiar story is out. It will be interesting to see what direction the franchise will take. How far have the dinosaurs evolved? What do InGen and Dr. Wu plan to do with their creation? Who else will join the dinosaur-making “industry” – will Biosyn Corp, the company Dodgson and Nedry worked for in the original film, ever get to make their own dinosaurs? What other secrets has Lockwood been hiding? And when is the whole “military using the dinosaurs” plot going to kick off?