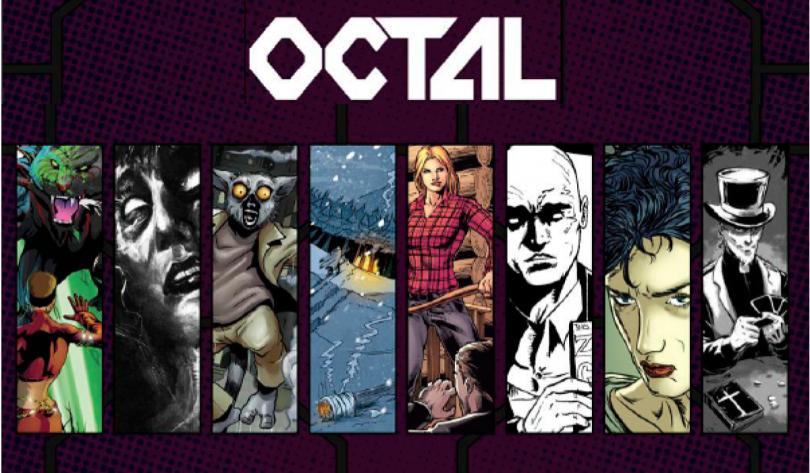 After reading the first volume of Octal, a collection of eight “pitch packet” comics, I was excited to crack open Octal‘s second volume. You can read a more detailed review of Octal Vol. 1 here, but in essence its short stories ranged from great to less than interesting, though all were inventive in their own ways. The idea of looking at comic pitches was really interesting to me. In Vol. 1, it seemed like all eight stories acted (or at least tried to act) like pilot episodes, each with a beginning, middle, and end. A lot of what I liked came from how these creators fit so much into a dozen or so pages and how they set up would-be future issues.

However, in Vol. 2, many of the short stories feel less like mini-episodes and more like proofs of concept. Some don’t even have real endings, they just finish once they’ve introduced the main elements of the story without any resolution. This made reading this volume less satisfying than reading the first one, as I needed to get used to this new format. That being said, there were some complete, TV pilot-like stories in here too. Like the first one, Vol. 2 was a mixed bag, but such an interesting mixed bag to read. But enough preamble, on with the review: 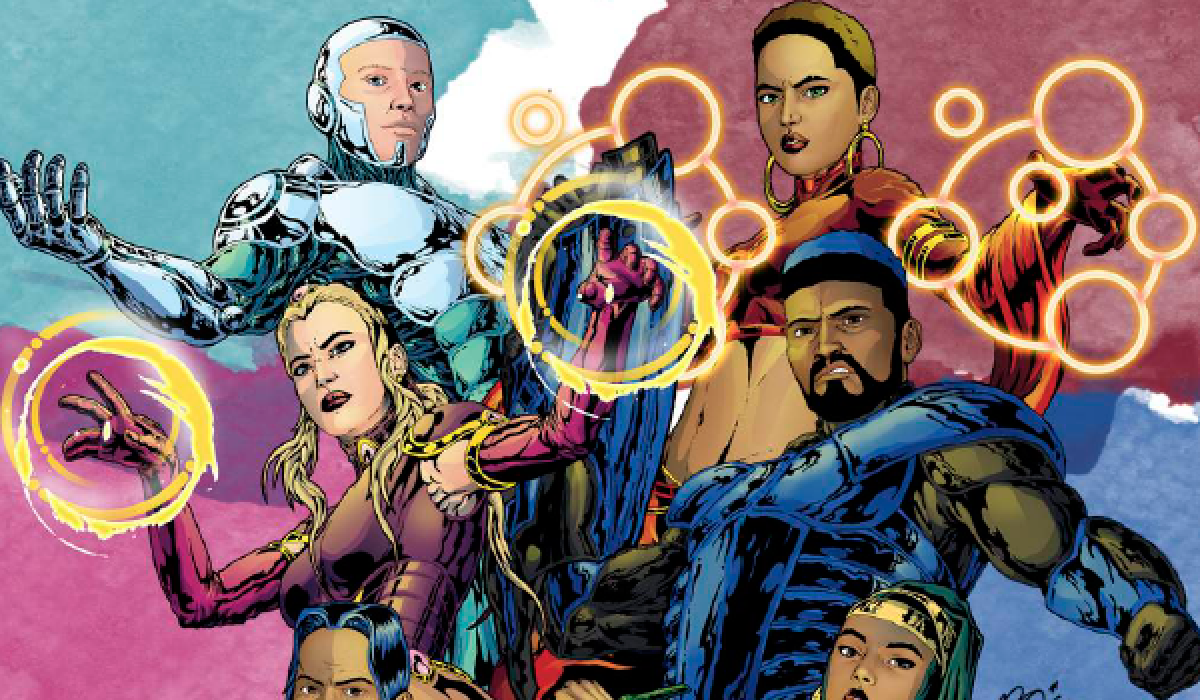 Sisters Okira and Onika live in an afrofuturist world (somewhat like the one in Black Panther) and discuss Onika’s future as the protector of their people. There are the beginnings of good character work here, but they are quickly interrupted by an attacking giant jungle cat. The magic-driven action is good, but comes too quickly for me to care about the characters affected and relies too heavily on splash pages and poor panel layout. There’s a little more to this story, but needless to say it ends before it gets started. The artwork by Everard J. McBain, Jr. is really colorful and dynamic, if not a little confusing at times. I am curious about Celflux‘s world, as I don’t feel I got to see much of it here, so it would be nice to see what else this story has to offer.

Night of the Living Dead by Tom Skulan 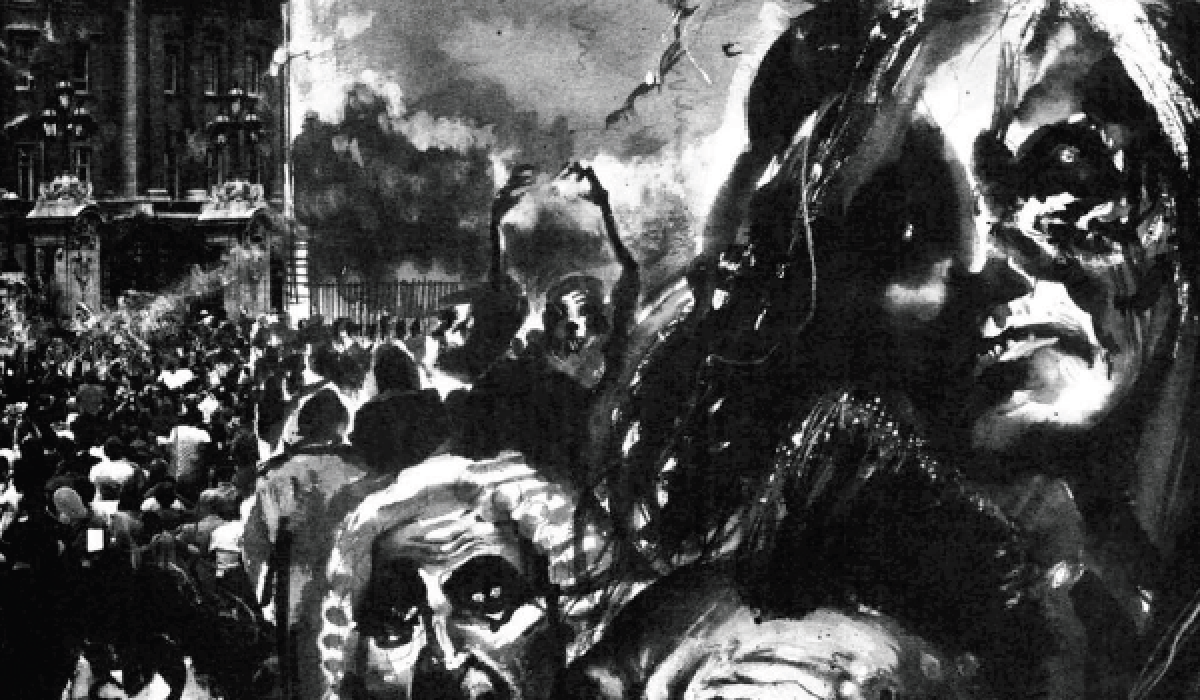 This is such a cool concept for a comic series: a prelude, adaptation, and follow up story to George Romero‘s classic zombie film, Night of the Living Dead. The comic wisely adopts the film’s black and white coloring and Carlos Kastro‘s art leans heavily into dark shading and shadowy interiors. This prelude pitch is short and to the point, dropping us mid-flight into an airplane with an infected passenger onboard. From there, chaos ensues and segues thematically (though not literally) into the world of the film. I love how this comic sidesteps any explanation for the zombie infection; the zombies act like a force of nature, which makes them all the more terrifying. The violence and gore are pretty explicit, just barely tempered by the black and white coloring. I would love to see how this series progresses, especially in what stories it tells after the plot of the first film. The Walking Dead has cornered the market on zombie comics for long enough! 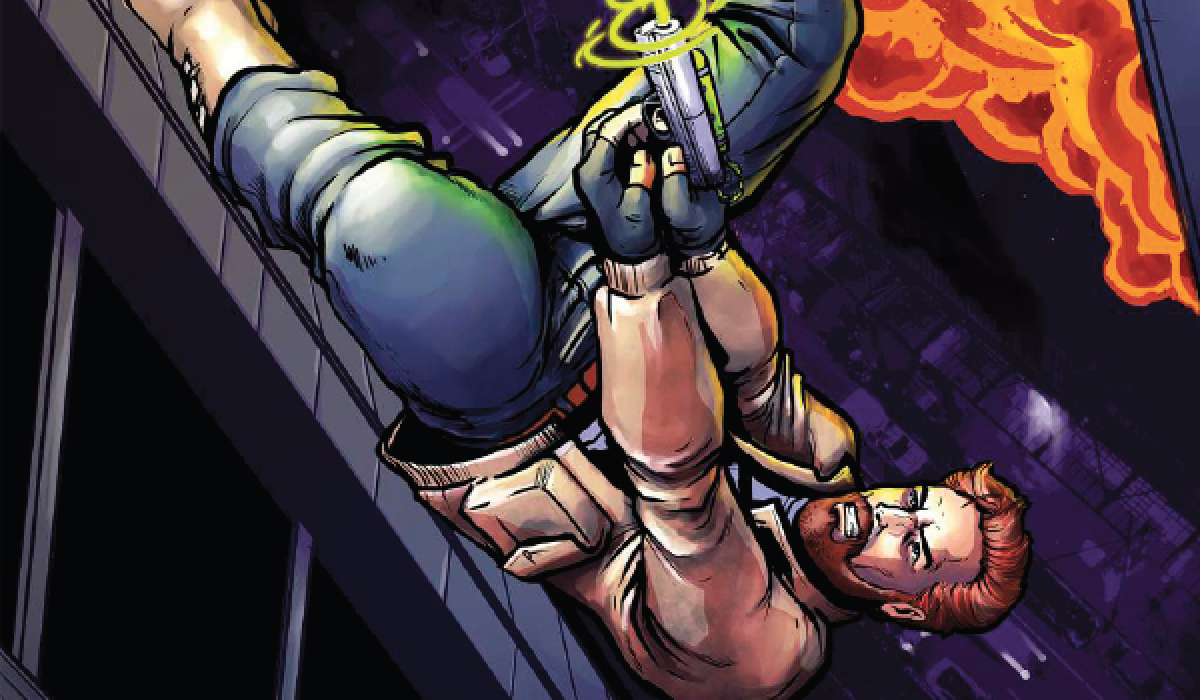 It is hard to tell in what direction Disunity is going, but whatever direction it is, I am sold. Badass bearded scientist Dr. John Connati is trying to solve his friend’s murder and catch a teleporting assassin. He works alongside a neat team of sci-fi allies, including an uncooperative, womanizing koala-looking creature named Squeak, to find the mysterious killer. The story does not spend much time establishing its world, which is good for pacing but leaves out what might have been good to know to better acclimate myself to Disunity‘s world. A lot of the sci-fi, dimension-hopping dialogue is hard to follow, but Rem Fields‘ sleek artwork guides the reader through regardless. By keeping the focus on its cast of characters, Disunity sets up a captivating mystery that I hope to follow. 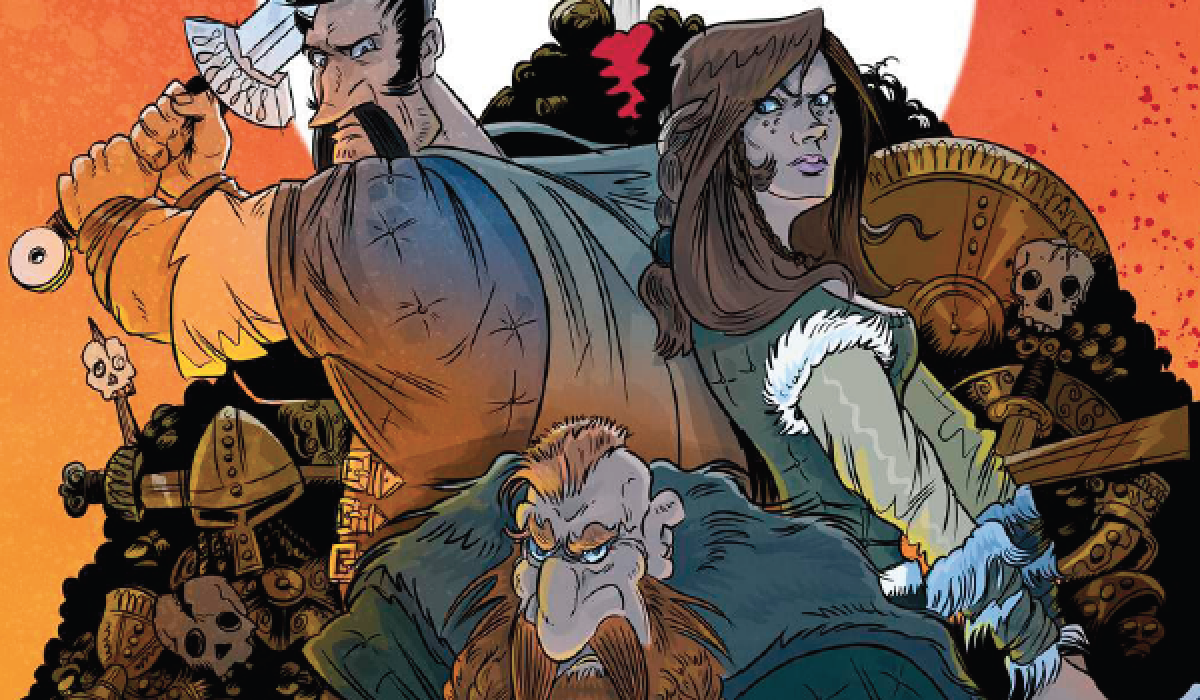 In this straightforward, Scandinavian comedy, three vikings bumble their way through a quest to destroy a powerful sword. The artwork is a lot of fun (and impressively makes pages of snow interesting to look at), with a few character designs reminding me of the Asterix comics. The camaraderie of our main three adventurers carries the reader through this short story, especially in the dramatic moments surrounding the personal demons of one of them. The pitch’s one fight scene is a little muddled, but too short to be a problem. One little detail I really liked was the use of of norse words in the comic’s dialogue, they fleshed out the comic’s setting in a fun way. Overall, Ulfberht is a nice tease of quests to come. 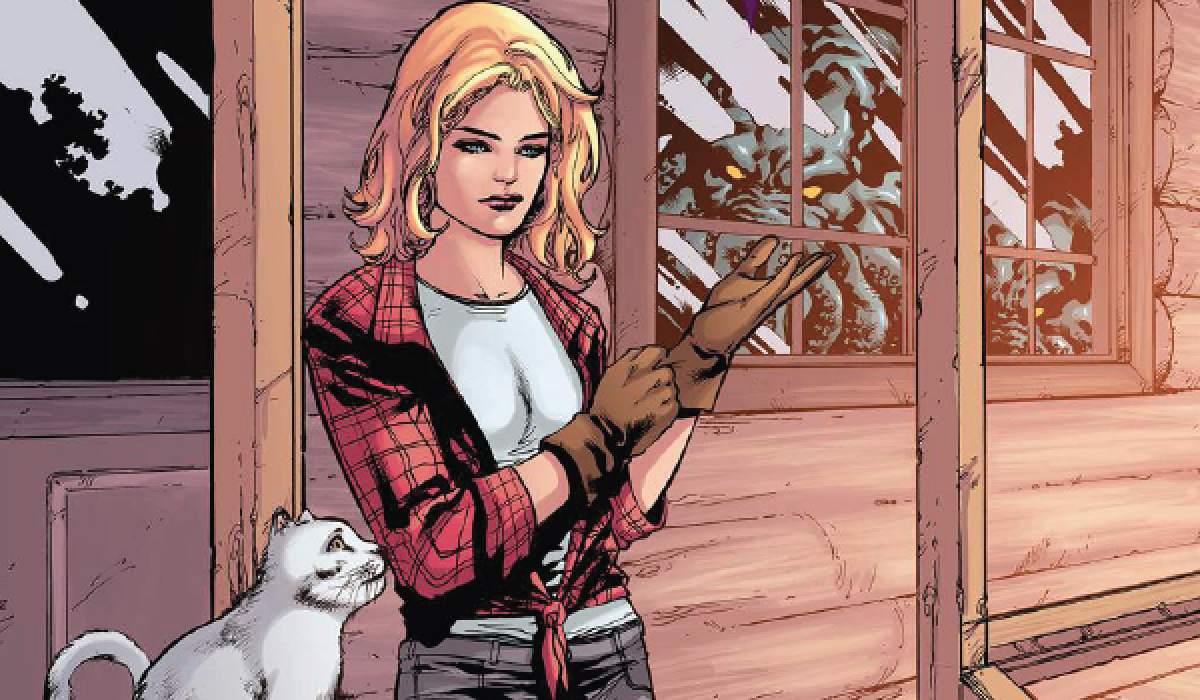 In an opening scene straight out of an 80s action movie, two men in suits approach Samantha Jean Wyrick at her cabin and ask her to come with them. She declines and fights them off before learning who sent them: her uncle Mike, the leader of a mysterious cult. There is no great story here, but instead a very well written introduction to the character of Samantha. She is witty and sincere, tactful, but willing to fight dirty when she must. I would happily follow Samantha across a longer story, but I am not sure where she would go from the end of this pitch. While a pitch does not need to feature a story arc, it should at least bring up an inciting incident that its protagonist will have to deal with and there is not one here. That being said, Samantha as a reluctant hero is a great character to start from. 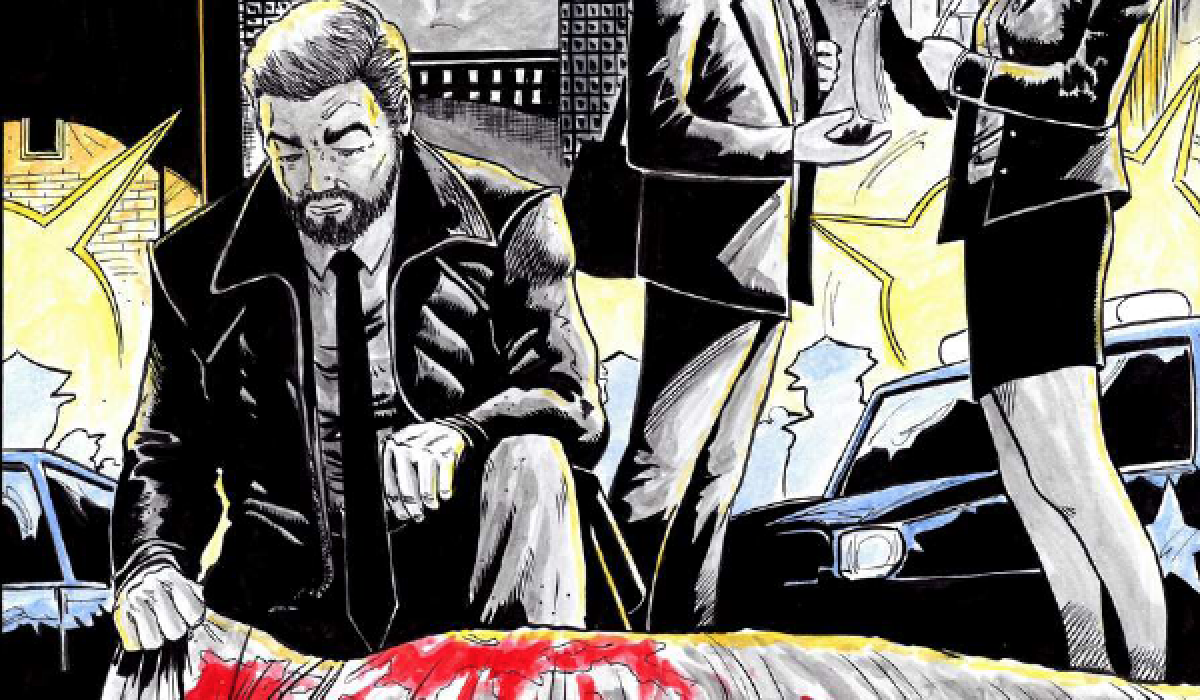 For me, Travelers is a great example of what a short pitch story can do: great character introductions, a fleshed-out atmosphere, and wonderfully moody visuals. Seriously, major props to Milenko Bogdanovic‘s black and white, futuristic, yet Soviet-era designs. Detective Skoda, our narrator, is your archetypical noir protagonist. He meets Bemist, a robot, on a train and intervenes when a pack of bigots try to hurt Bemist (kind of like the “manners maketh man” scene from Kingsman.) The two are a classic, odd-couple duo that work really well in noir detective stories. For a story set decades in the future, Travelers sparingly uses futuristic elements in this brief story, keeping the focus on two great characters and a perfectly cynical and morally ambiguous tone. Skoda and Bemist are definitely a buddy cop duo to keep an eye on. 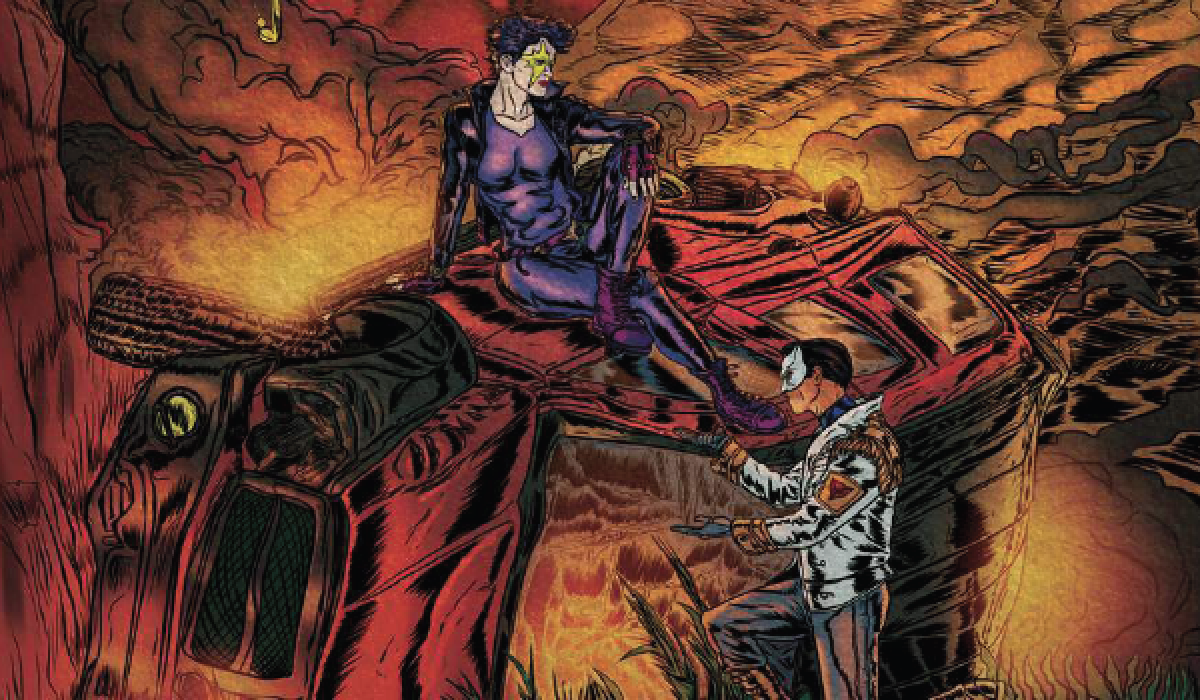 There are a lot of interesting ideas in Possession, but this pitch did not grab me as much as I had hoped it would. Javier and Sheila are two people possessed by the Greek gods (an aspect that I did not see much of in the story) and with these new powers the two act as pseudo-superheroes, colorful costumes and all. The two fight outside an neon-lit nightclub and while the action is exciting and illustrated well by Julian Taveras, Possession‘s jumbled choice of lettering font made the whole thing difficult to read. It was hard to sense what tone this story was going for, but I can see plenty of potential in a world of superheroes powered by the Greek gods.

The Seekers by William Henry Dvorak 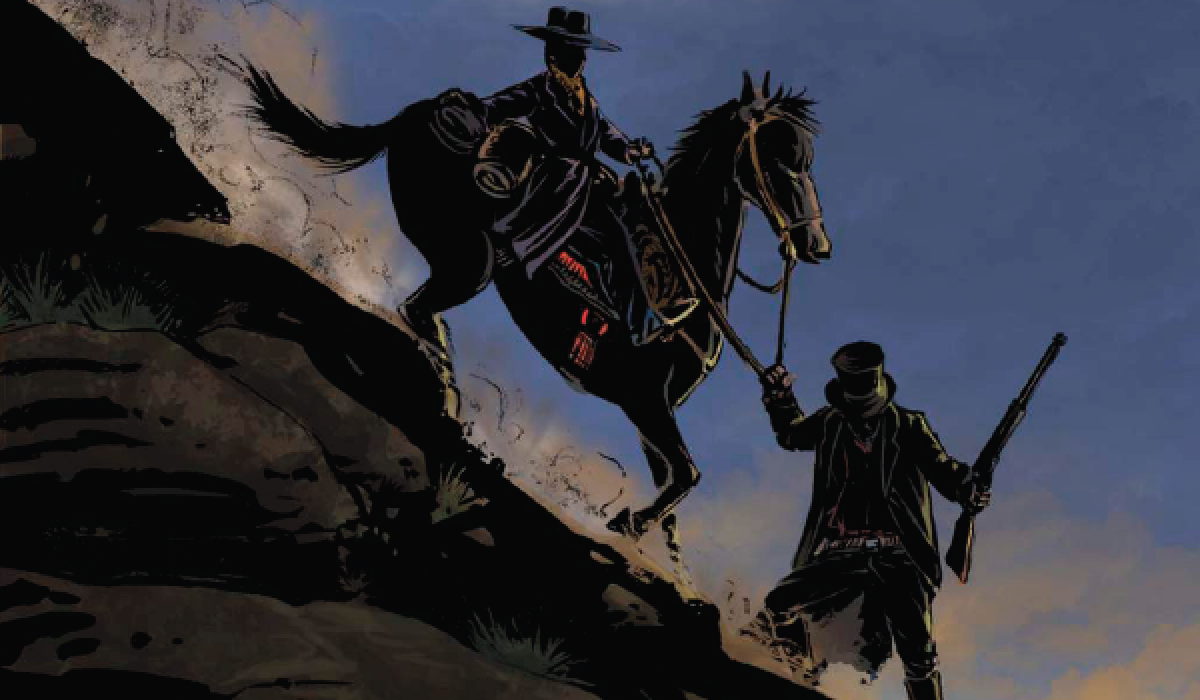 Lastly, we come to a setting that I absolutely love: the Old West with monsters and demons, think Preacher meets True Grit. Our narrator, Lily, is the apprentice of Reverend Brown, a religious monster fighter and avid gambler. We do not yet learn much about Lily, but the Reverend has a lot of roguish charm. The two make for an interesting and unexpected pair. The supernatural threat that attacks comes a little out of nowhere, but future stories in this world could easily incorporate their satanic elements a little more naturally with more time to do so. The black and white artwork by Krzysiek Budziejewski matches the story’s mood perfectly; quite literally, there is a lot of grey area in the world of The Seekers. This could easily make for a very entertaining series.

You can check out Octal Comics’ website here and read my review of Octal Vol. 1! What series would you read? What would you want to pitch for a comic? Sound off in the comments or send us your thoughts on Facebook or Twitter!