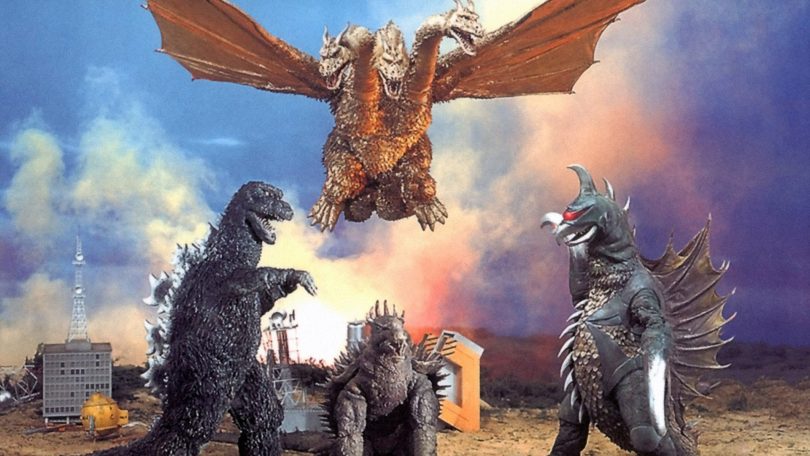 Welcome to the second part of our movie marathon through the filmography of Japan’s favourite city-crushing monster Godzilla. The 1950s to 1960s built Godzilla up as a symbol of nuclear devastation. But, over time, he evolved into both a heroic character and a father. Then, the 1970s came along and things got weird. These films are a part of the original “Showa” timeline. Godzilla became a kid-friendly hero, a figure of environmentalism, and tangled with space cockroaches and monsters made from poo. It’s as nutty as it sounds. Let’s dive right in! 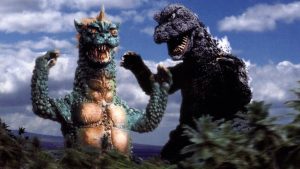 So much for Godzilla going into retirement. A new film came out a year after Destroy All Monsters. Also known as “All Monsters Attack”, Godzilla’s Revenge was marketed to children, and man does it show. The film focuses on a little boy named Ichiro (voiced by Susan Sheridan) who is often bullied. To deal with his troubles, Ichiro often daydreams that he is on Monster Island and friends with Minilla, Godzilla’s son. Minilla speaks English and sounds strangely like Barney the Dinosaur.

The film uses a lot of stock footage from past films, particularly with Godzilla fighting other monsters. Ichiro later gets kidnapped by bank robbers, leading to an extended Home Alone-esque sequence. We do meet a new monster, Gabara, who bullies Minilla, and can generate electricity. The events in Ichiro’s dreams are meant to symbolise how he feels in life. Minilla has a better father than he does, and Godzilla’s child learns to stand up to his tormentor. Ichiro fights his own bullies, only to then deliberately knock a painter off a ladder and laugh at his misfortune. So he became a bully himself? Seems a little stupid. One of the weakest films, and though charming in some spots, it can be skipped. 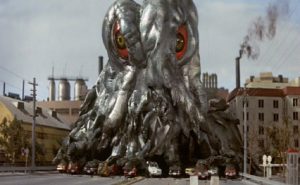 If you thought FernGully was unsubtle with its environmental message, you ain’t seen nothing yet. By far, this is the weirdest Godzilla film to date. Godzilla vs. The Smog Monster is a stupid, artistically-inclined film that feels like an acid trip. The 1970s were an experimental time, and Toho let director Yoshimitsu Banno create a surreal anti-pollution film that was so gross and weird, they fired him from the studio. The villain is Hedorah, an alien tadpole mutated by pollution, that would give Hexxus a run for his money. As such, he flies around, drowning people in diarrhoea, leaving only rotting corpses. It can be horrifying at times, and just as silly. The film has an irritating environmental theme song, animated sequences, and very bizarre musical moments. It is a terrible film, but a memorable one regardless. 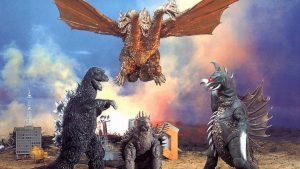 Another weird entry into the franchise, Godzilla vs. Gigan tries to go back to the earlier Godzilla films in terms of narrative. It tries. A manga artist discovers a newly built theme park is actually a cover for an invasion by alien cockroaches. Yes, really. The cockroaches are from the planet Space Hunter Nebula M. Okay, I’ve heard of weirder planet names. To conquer Earth, the roaches are using audio tapes to control King Ghidorah and the badass newcomer Gigan. He looks like if the Borg tried turning a chicken into one of their own. If you are wondering why Ghidorah is alive, this takes place before Destroy All Monsters.

Godzilla and Anguirus sense a disturbance in the Force and race for Tokyo to intervene. Godzilla is now a full-fledged hero, with Anguirus as his dim-witted sidekick. There’s a weird moment where the two actually start speaking in really bad English. Godzilla sounds like a drunk Sylvester Stallone. The battle scenes and destruction of Tokyo are probably the film’s highlights, even if most of Ghidorah’s footage is from earlier films. 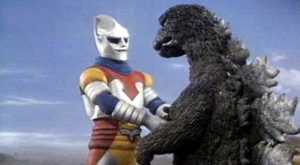 As you probably have figured out by now, the plots in these Godzilla films make little sense. Godzilla vs. Megalon keeps up this tradition. A long lost civilization called Seatopia hates mankind’s nuclear tests, and decide to unleash the giant beetle Megalon upon Japan to get revenge. It turns out Seatopia are friends with Space Hunter Nebula M, who deploy Gigan to back up Megalon. Most importantly, why are the Seatopians dressed like the KKK? They are led by a rather angry man, who shouts at Megalon to wake up like he’s late for school.

At times, it feels like a 1970s Doctor Who episode, with random martial arts fights and a wacky car chase. Let’s talk about Jet Jaguar, an Ultraman-esque robot who teams up with Godzilla to fight the enemy. Created as part of a children’s competition, JJ was meant to star in his own film. However, Toho thought it wouldn’t succeed financially, and threw in Godzilla and Gigan for extra revenue. That would explain why Godzilla is introduced standing around waiting for something to happen. The monster fight is the obvious highlight, particularly when Godzilla performs the most epic dropkick on Megalon. It’s so awesome, they do it twice! 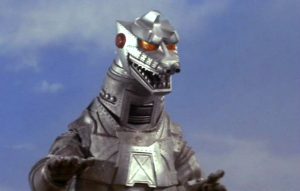 Generally regarded as one of the better films in the series, Godzilla vs. MechaGodzilla tries returning the series to its roots. The film is set in beautiful Okinawa, and incorporates folklore to the story. Archaeologists find cave markings that imply a prophecy, claiming evil monsters will threaten the land, and the slumbering King Caesar will save Okinawa. Godzilla shows up and goes on a rampage, so presumably, he is the evil monster. Anguirus gets into a fight with Godzilla, who breaks his bottom jaw (in a nod to King Kong). But, then, a second Godzilla shows up, exposing the first as a giant robot, MechaGodzilla.

MechaGodzilla has one of the most impressive character designs in the Kaiju pantheon. After Godzilla loses, the human characters decide to take an idol to King Caesar’s shrine to wake him up during a celestial event. In a bizarre twist, MechaGodzilla is controlled by space apes, an obvious nod to Planet of the Apes. The ape men are disguised as humans, and continue the trend of wearing silver suits and operating from caves. When injured, the ape men transform back into their true forms through cheap-looking effects.

The film has a sprinkling of great moments. There’s an atmospheric scene where Godzilla is struck by lightning and his power is boosted. King Caesar has to be awoken by a lengthy song performed by a descendant of the Izumi royal clan. It goes on for a while, but ends with Caesar waking up with a random explosion. King Caesar is based on the Shisa, lion guardian statues often found across Okinawa. He is a very unique character, but it would’ve been more effective had he come into the story a little earlier in the plot.

This is the final movie of the “Showa” era and the original Godzilla timeline. The film serves as a sequel to the previous film. The space apes are back, but now remain entirely in their human disguises, and wear funky-looking helmets. Wishing to get revenge on mankind, they recruit a disgruntled mad scientist, Dr. Mafune, to help rebuild MechaGodzilla. Dr. Mafune learnt to manipulate sea life, and controls Titanosaurus, a seahorse-esque dinosaur. This is the first time Godzilla has had to fight two enemies, with no allies to back him up. Dr. Mafune’s character arc is a complex one, as is his relationship with his conflicted daughter Katsura. In the end, Godzilla is victorious, and departs into the sea to rest for a decade.

What is your favourite Godzilla film from the Showa Period? Is MechaGodzilla awesome or very silly-looking? Leave a comment below or on our Twitter or  Facebook feed.