Home » Magic as an Outcast: A Conversation with Lyndon White, Creator of Candles 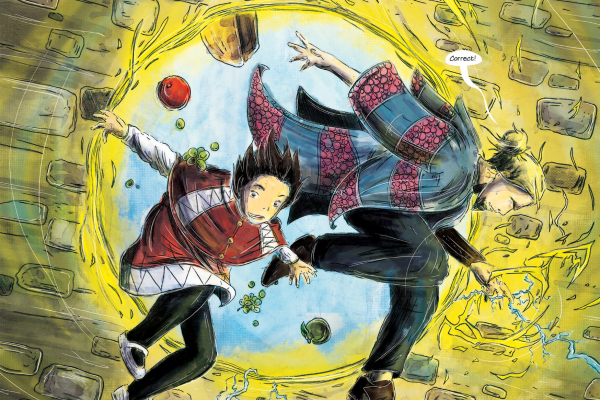 Lyndon White is a familiar face on the U.K. indie/small press comics scene. His recent work with Hellbound Media illustrating Mandy the Monster Hunter: Legend of the Spindly Man is just the tip of the iceberg on a suitably illustrious portfolio. His vibrant, fantasy-esque art can be found in many of Blue Fox Comics‘ titles, including The Mind of James Svengal, Hexes and Sparks and the Falling Star.

Now, he’s branching out for his latest ‘solo’ work as both an artist and story-teller on Candles, a fantasy/adventure comic that’s currently crowdfunding on Unbound. We caught up with Lyndon to find out more about the comic!

AP2HYC: This is your latest full-length graphic novel that’s both written and drawn by you. What’s the story of Candles all about?

Lyndon White: In a nut shell, Candles is a fantasy comic about a young girl (Grace) and her quest to steal the evil Witch’s magic and use it to save her dying village. It’s set in a world where people are taught never to use magic. Magic users are outcast from society, yet it surrounds them in one form or another.

The village has been subjected to the Witch and her magic for generations. The Witch has cast a nature plague known as Dark-bark over the land. It has no mercy, anyone infected has their skin slowly turned to tree bark, before losing control of their body completely. At night, candles glow throughout the enchanted forest and lure the most infected villages into the forest, never to be seen again.

It’s a little light tonally from my previous stuff, but the darker themes are there. Not everyone will have a happy ending when a plague is involved.

AP2HYC: Candles‘ fantasy themes feels like such a perfect match for your psychedelic-esque art. Why did you want to bring this story to life?

White: There’s been a few different projects fluttering around for awhile and this is the one that landed a home with Unbound. What I love about this story is the wider range of characters. Grace is the protagonist, she is a little head strong, rebellious and kicks ass when she needs too. Then we have people like Idris, a powerful sorcerer that’s a little clumsy, tries to keep to himself but when push comes to shove, he feels he has to do the right thing, no matter the consequences. Behind the magic and fantastical in this world, there’s a lot of human moments. I’m hoping readers will see the different viewpoints of each character. Also, people will fall in love with Ava, Idris’s young but talented apprentice. She innocently gets herself and Idris into trouble more than once, but you can’t stay mad at her.

One thing I wanted to push forward is the consequences of living in this world. Everything has a cost and even though I am relying on some fairy-tale visuals its very narrative focused. Everything is in service of plot and the development of these characters. Your going on a journey with them in this book. 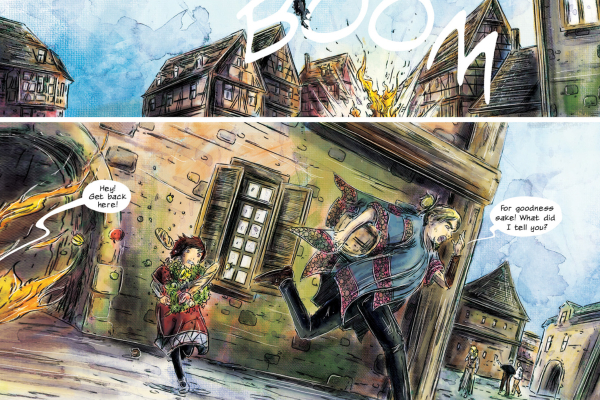 AP2HYC: In the book’s Unbound profile page, you mention that Candles takes inspiration from Studio Ghibli films and is ‘light and humorous’. How does Candles compare and contrast with your past work?

White: Candles is a much lighter tone, which in contrast can make the darker scenes even darker. I’ve drawn a lot of horror books the past few years and one thing I’ve joked about, is how the monsters never come out during daytime. Or they haven’t for most of the scripts I’ve been given. Working on a fantasy book rather than a horror book, naturally means you will be drawing different things. Take one look at the character designs in Candles and they showcase a much lighter world. A world that you might want to live in, if there was no plague of course.

There is quite a lot of humour throughout the book. It’s by no means a gag script but tonally you could compare it to Bone (Jeff Smith) in some places. There’s ongoing jokes, one involves the Blacksmith, another Grace’s family rooster. When they are first mentioned the humour isn’t there, but later when you get some context to how these things relate to the characters. I’m expecting a few chuckles, or at the very least some light hardened grins. Again, it all comes back to how everyone is interacting in this world. Once the reader learns a bit about it, things will slot into place.

AP2HYC: You’ve often worked with a writer in past comics. How does the working process differ when you’re working on a ‘solo’ project such as Candles?

White: I’ve had a blast bouncing around different projects the past few years. However, there is something special when a book is 100% your baby. It’s all you from the dialogue, the pacing, the lines you’ve drawn etc.

The difficult part can be the isolation. When working with a writer you have someone to bounce ideas off and share parts of the project as things progress. Yes, you can do that online with your audience but publicly, you only show snippets of things. Readers shouldn’t be getting spoilers and massive plot points until they are reading the book. Thankfully I do have a couple of other creators that I can show bits of the project to, it helps and avoids getting tunnel vision.

Process wise, I still follow the same steps. I didn’t draw anything until I had a solid draft of the script finished. I’m working through the line work now while editing and tweaking before doing all the inks, colours etc. It still the same steps, like following a recipe.

AP2HYC: You’re no stranger to crowdfunding your work, but why turn to Unbound rather than Kickstarter

White: Unbound are a mid-point between working with a traditional publisher and doing a Kickstarter. At the moment, Candles runs like a long form Kickstarter over the course of a few months. There’s reward tiers and different perks, the things people are used to from Kickstarter. The key difference is when the campaign is funded. Unbound then switches to a more traditional publisher. They help me proof and the book, print it, get it into production, distribute it. All the things you want from a publisher. I’m also working with a fantastic editor Lizzie Kaye, who is helping me make the book the best it can be. 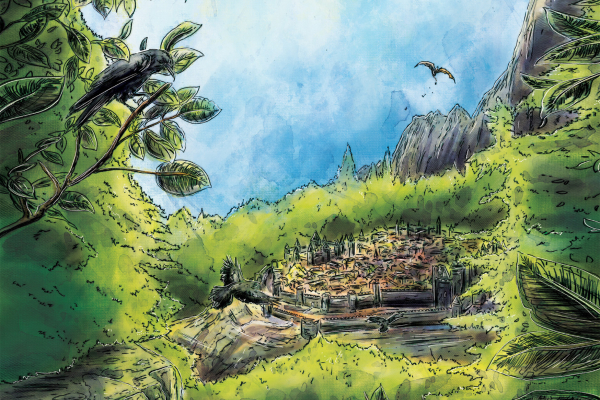 The main differences is the back-end stuff. However, with Unbound, backers see how the book is made as I’m working on it. In the past I’ve done the work before hand, finished a book and then Kickstarted it, using Kickstarter as very low risk pre-ordering system. I could have done this with Candles but it wouldn’t have been ideal because its such a big book (120 pages), which is a lot of work to do by yourself and in advance. It’s nice to have Unbound supporting me.

I do want to note that you have to submit and pitch to Unbound, not everything gets accepted. Their editors accept projects that they are excited about and believe in. You’ll find a much more curated selection of books on their site.

AP2HYC: What kind of incentives can people expect when backing your book on Unbound?

White: I’ve tried to keep it fairly simple, you can get copies of the book which is hardback, digital copies, signed and sketched editions, copies that come with a bookplate and bundles to get two copies of the book at a discounted rate, which helps with overseas postage. Then with the higher tiers you can get an original page of art from the book and I’m doing commissions. There’s also a reward tier to get a signed copy of the script which I can do this time round.

AP2HYC: What’s the most rewarding thing for you about working on Candles?

White: It’s nice to finally be writing and drawing my own graphic novel again, something I haven’t done since Sparks and the Fallen Star which came out late 2016. I’m having a ball drawing my own characters and telling this story. I know this sounds a bit tacky and PR heavy, but I generally can’t wait for people to read this one. It’s not only the favourite thing I’ve worked on, but in my opinion my best work to date. Both from a writing and drawing perspective.

I’m much further into drawing the story than people have seen online and I’m really excited for people to read what’s coming. I’m working on Candles because I want to tell this story, it’s been stuck in my head over the past year and it’s not let me go. I think people are going to be happy when they read the finished book. Plus, I’m drawing my version of magic. What’s not to like?

You can support Candles via its Unbound profile and keep up to date with progress on the comic. Have you already pledged towards the campaign? Let us know in the comments section below or send us a Tweet!