Home » Venom is Poisoned By its Own Stupidity 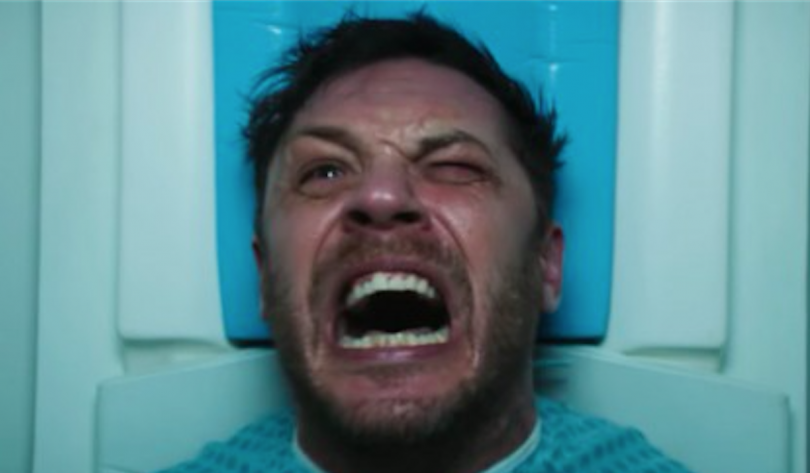 Let’s get this out of the way first. No, Spider-Man is not in this film. He’s never mentioned, referenced, or even acknowledged in this film. And why would he be? This film isn’t even a part of the Marvel Cinematic Universe. Just the first entry in Sony’s “Marvel Universe”, which they proudly boast will have access to 900 characters. O’Great Comic Book Gods, help us all. And if Venom is any indication, Sony’s latest attempts to butcher the Spider-Man universe will be a nightmare. Or an abject failure, if we are lucky. Venom, the long-awaited, or perhaps unwanted, film based around Spider-Man’s nemesis, is exactly what was expected. A malignant, profoundly stupid, headscratcher of a film, where Tom Hardy’s hilarious performance is the only good part.

You want to watch Venom? Just go watch The Mask, which is effectively the same movie, but much more amusing. We all know the reason why this film was made. Avi Arad, a former powerhouse amongst film producers, found Venom edgy and has wanted to make a film about him for ages. So much so, that he hijacked Spider-Man 3 (which is a better film), canned Sam Raimi‘s planned fourth film, and greenlit The Amazing Spider-Man series. Now, his dreams are fulfilled, with his pet project emerging from the Sony-shaped toilet bowl, clinging to life. This film was clearly hacked to pieces once so-and-so realised they wanted kids to see it. For eleven years, this film has been on and off the drawing board, and was as silly as expected.

DISCLAIMER: The remainder of this review contains major spoilers for Venom!

The first problem with this movie is the absence of Spider-Man. If they had tied into the MCU via Tom Holland‘s Spider-Man, maybe it would’ve had sturdier footing. Due to the complicated joint-custody license Marvel and Sony have, Sony decided to go with the more mucky route. Jettisoning Venom’s traditional comic book origin story, it reworks it to have nothing to do with Spider-Man. Even though Venom physically resembles Spider-Man, and shoots out black webbing-like limbs. I suppose it is the type of film where you are not meant to think about it too much, or think at all.

In the film, Eddie Brock, played by Hardy, is best described as a thundering dumbass. He is an activist journalist living in San Francisco, given the opportunity to interview Carlton Drake (Riz Ahmed), CEO of the space-faring Life Foundation. Eddie learns that Drake is corrupt, after stealing info from the e-mail of his fiancé Annie Weying (Michelle Williams). Yet, despite being a professional journalist and needing evidence of proof of truth, Eddie confronts Drake like moron without it. He is obviously fired, Annie being fired from her associated law firm too, breaking up with Eddie. Way to go, genius.

It turns out Drake actually is corrupt, performing human experiments involving alien symbiotes plucked from a comet. These symbiotes bond with human hosts, Drake hoping to use them to achieve space colonisation and exploration. Yes, Drake is as cliché as a mad scientist as you can get, complete with the “humans are a disease” mindset. He also dedicates every scene he is in to firing people, or feeding them to the symbiotes. In a subplot, a rogue symbiote named Riot body-jumps his way around the world to escape Earth on Drake’s rocket. It’s a little confusing as to what the symbiotes actually want.

One of Drake’s scientists, played by Jenny Slate, gets cold feet and brings Eddie into the fold to expose Life Foundation. The other symbiotes have randomly died, so the lone survivor, Venom, escapes by bonding with Eddie. At first, Eddie and Venom don’t necessarily, well, bond, but eventually team up to stop Drake. There is also a plot twist that the symbiotes eventually poison and degrade the host’s internal organs. Venom starts doing this to Eddie, but then after a brief moment of separation, they bond again and no further poisoning occurs. Perhaps it is just the way the symbiotes feed on humans, but that makes no sense, since Venom eats people anyway. 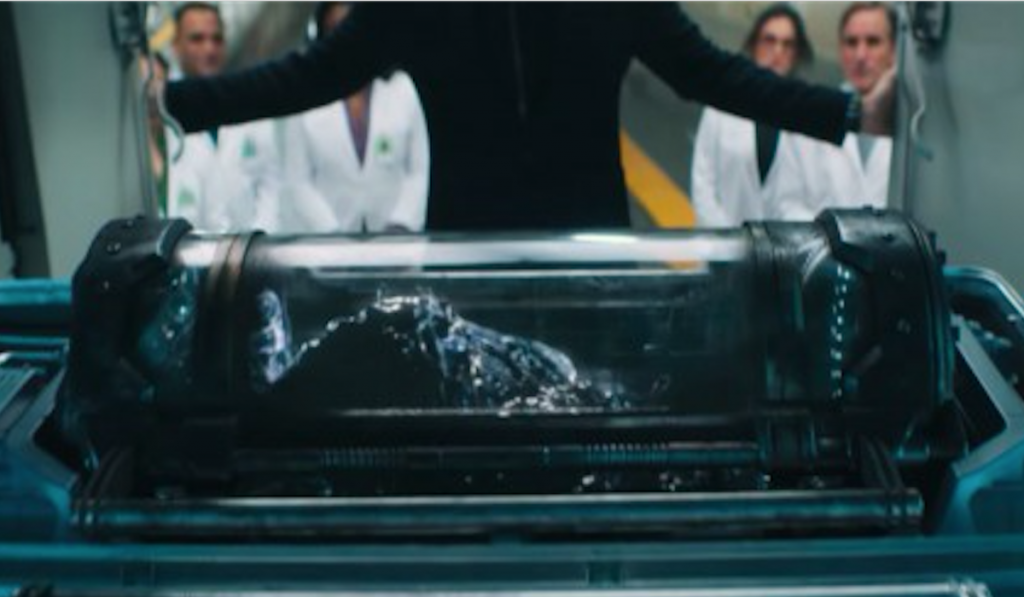 Tom Hardy is pretty funny when doing a double act with himself, and when Venom finally shows up an hour in, the film becomes enjoyable. I would say that the action scenes are the highlights of the movie, but the editing is atrocious. They are so fast-paced and frenetic, I had no idea what was going on. I don’t know which has the worse battle editing: Venom or Batman Begins. Then, there’s the hint that this film was intended to be 18/R-rated, but the studio realised this was a Spider-Man spin-off, and kids would want to see it. So, beyond a couple of hints of Venom eating people offscreen, the action is subpar. The insane editing likely removed some of those 40-minutes worth of footage that Hardy has lamented about.

The film’s sheer stupidity is sometimes baffling. Plot threads are dropped with little notice or fanfare. Eddie is such a moron in the first act, and he wonders why his life when so downhill til Annie spells it out for him. All of the supporting characters are pointless, most being killed off or disappearing altogether. Seriously, Carlton Drake fires so many people in this film, J. Jonah Jameson would be impressed. Speaking of, there’s no direct tie-in or nod to the MCU. An astronaut is namedropped as “Jameson”, so does that mean a Man-Wolf movie might be in the works?

Most importantly, casting Eddie and Venom as the protagonists, without Spider-Man around, cancels out the drama of the temptation to do evil. Eddie, throughout the movie, is a do-gooder with little vices. The only reason he acts like an idiot and confronts Drake without his evidence, is because the plot demanded it. There’s no desire to give in to temptation, to win back Annie, or get revenge on those who did him wrong. This feels like an edgy but hollow remake of The Mask, minus the comedy and effort. Some have said that Hardy appears to be channelling Jim Carey, but I don’t see it. Feels more like a homage to John Leguizamo as Luigi in Super Mario Bros, especially with that stereotypical Brooklyn accent.

The film seems dedicated to alienating and insulting its audience. The plot is often absurdly brainless, with many moments that take you out of the story. The absence of Spider-Man forces Venom’s story to be rewritten, going for the silly path rather than the profound. I would have been perfectly fine if they took inspiration from “Agent Venom”. That would have given Eddie a more sympathetic light if anything. The changing of the film to a flimsy PG-13 was the studio shooting itself in the foot. The likes of Venom and Deadpool proved an 18/R-rated superhero film could work. It is likely Sony’s producers got cold feet and decided to make it like the MCU films at the last minute. That would explain the dreadful editing. 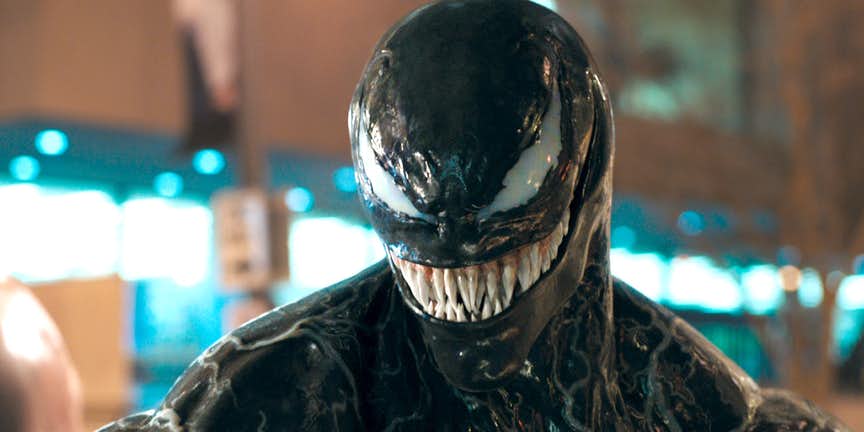 Venom reeks of Avi Arad’s infamous meddling, feels like watching a superhero films from the early 2000s, and fails to be good beyond being mildly dumb fun. This movie proves that Sony really can’t handle Spider-Man without Marvel Studios. I do have hopes that Into the Spider-Verse will be good. It has to be better than this disaster.

If anyone cares to stick through the credits, the film features the standard post-credits scene. In it, Eddie meets Cletus Kasady, played by Woody Harrelson in a wig he looks like he stole from Ronald McDonald. He then says something along the lines of, “When I get out, there will be carnage!” He might as well have winked at the camera, given how the sequel plans were as subtle as a house on fire.

As much as I would like to see Carnage on screen, it wouldn’t be in a sequel to this spider turd. I’d be thrilled to see films based on Morbius, Black Cat, Silver Sable, Kraven, etc. But, not from Sony. Venom is total waste of time, not even Hardy’s performance can save it, since the script and execution are lackluster. No one cared making this film. It wasn’t to make a good story, or bring a popular character to the big screen. It was made because Sony and Avi Arad want so desperately to cling to whatever Spider-Man shaped scraps they can hold onto, and make profit from them. It was made with less passion than that of the pigeons that hang out on my neighbour’s house.

Sony has no legitimate love or desire to tell engaging narratives with Spider-Man or his universe. They haven’t done that since Spider-Man 2. They just wish to make money in the most cynical, cash-grabbing, uncreative, and cheapest way that they can. I dread what these other planned films will be like. They’ve already killed off their Spider-Man franchises twice; the first was because they couldn’t have their way, and the second was through their own missteps. Third time’s the charm.

What were your thoughts on Venom? Better than expected or worse than you thought? Leave a comment below or on our Twitter feed.