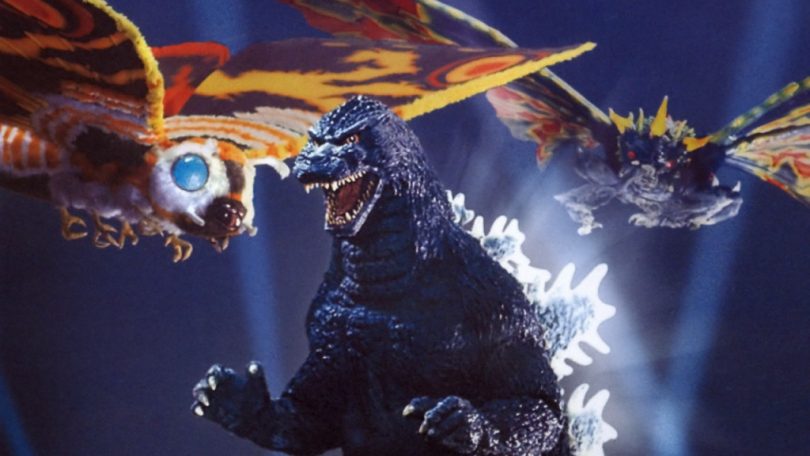 Welcome to part three of our trip through Godzilla’s entire movie filmography. Last time, we traversed the 1970s, which was a rather weird, experimental time for Godzilla. Now, in the “Heisei” era, Godzilla got a reboot and returned to his original role as a force of destructive nature. He occasionally appears as a hero, as each film in this era reintroduced old friends and foes, in probably the best years of Godzilla’s career. Apart from the TriStar movie. We’ll get to that… 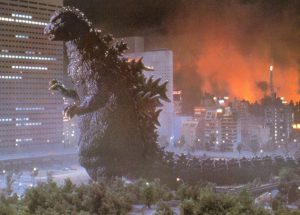 After ten years of slumber, Godzilla made his triumphant return. The new film, The Return of Godzilla, is a direct sequel to the 1954 film. The American film is named “Godzilla 1985” and has the same serious tone as its predecessor. Raymond Burr reprises his role as Steve Martin, and took the sequel very seriously. He shot down the idea to make the sequel a tongue-in-cheek parody, and refused to promote Dr. Pepper during the film. What a class act guy. Godzilla is no longer here as a children’s friend. He’s back in town to reduce it to rubble. The American edits are a little more on the nose, depicting themselves as courageous, and the Soviets, since this was made during the Cold War, as wimpy. 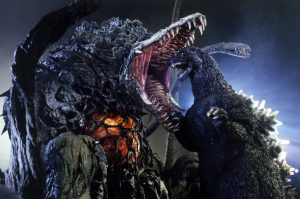 A direct sequel to the previous movie. Godzilla’s preserved cells become hot property after the events of the 1985 film. Dr. Shiragami is asked to combine the cells with genetically altered plants to help terraform deserts. However, a terrorist attack leads to his daughter Erika’s death. In his grief, he combines the Godzilla cells and those of his daughter with a rose, creating a mutated Kaiju named Biollante. Those wacky mad scientists. Biollante is one of the most imaginative of monsters, and stands out amongst Toho’s monster catalogue. At first, Biollante appears as a large rose plant, but later comes to resemble Godzilla. She is meant to symbolise the dangers of genetic engineering. The film also introduces Miki Saegusa (Megumi Okada), a young psychic who can form empathic links to the Kaiju. She becomes a recurring character throughout the Heisei series. The film has some great cinematography, special effects, and one of the most memorable scores in the series. 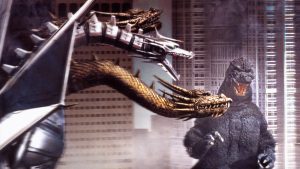 Godzilla vs. King Ghidorah has an intriguing if confusing plot about time travel, and explains the origins of Godzilla. Time travellers come from the 23rd Century to warn Japan about how the world will be devastated by Godzilla. They offer to remove Godzilla from the timeline to prevent him from being mutated by the atomic bomb in 1954. They remove the “Godzillasaurus”, but before leaving, the time travellers drop off three cute, winged critters called Dorats in Godzilla’s place.

Turns out they created the Dorats to replace Godzilla, so that they will merge into King Ghidorah, and use him to destroy Japan. Why? Because apparently Japan is the strongest nation in the future, and America hates that. Yeah, the film is rather anti-American. Luckily, one of the time travellers is good and strives to correct history by mutating Godzilla in the present. There’s a weird scene where she is chased by a grinning Rick Astley lookalike, who turns out to be a Terminator. There’s also a nod to Steven Spielberg, with a “Major Spielberg”, implied to be his father, encountering the time machine. While the time travel is fun, it is also confusing, and it will cause problems in the following sequels. 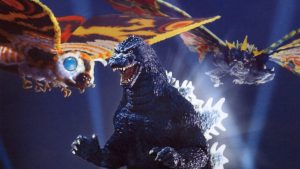 This is more of a Mothra film than a Godzilla one, though he’s on hand to play the villain again. Mothra’s backstory is revised like Ghidorah’s. Her fairies, now named “Cosmos”, keep the balance of nature in tact. When humanity screws up nature, Mothra’s evil counterpart, Battra, is summoned to reset the balance. Mothra and Battra don’t get on, but when Godzilla shows up, the two insects decide to team up to defeat him. I think the major highlight of the film is Mothra’s majestic hatching from her egg, the theme song performed by the Cosmos being both beautiful and haunting. 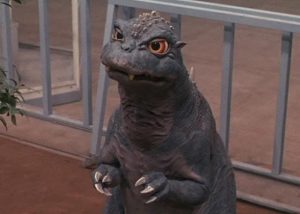 Watching Godzilla vs. MechaGodzilla II was like trudging through a river of treacle. It’s slow and boring. MechaGodzilla isn’t actually a villain here, but a man-powered mecha using the technology salvaged from Mecha-Ghidorah (as seen in Godzilla vs. King Ghidorah). The main story is actually about scientists discovering the egg of a baby Godzillasaurus, who is a reimagined Minilla. The egg is actually within Rodan’s nest, and the two Kaiju have some sort of brotherly relationship. So when Godzilla Jr. hatches, Rodan comes looking for him. The animatronic/costume of Godzilla Jr. is really impressive, and his relationship with one of the scientists is the heart of the movie. There’s also a hilarious moment where Rodan randomly flies over Tokyo Disneyland. I bet our own Scott Merdiew would pay to see Godzilla trash a Disney theme park! 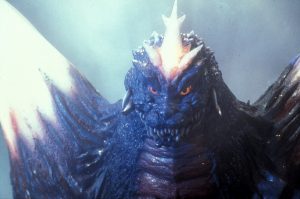 Godzilla vs. SpaceGodzilla is a bit of a mixed bag. The film focuses on Miki Saegusa, who is asked to use her telepathic powers in an experiment to control Godzilla. Miki struggles with her conscience, since she is one of the few who doesn’t vilify Godzilla. Mothra’s fairies warn of SpaceGodzilla’s existence and his intent on destroying Godzilla. SpaceGodzilla himself in a puzzling character, specifically his origins. The film gives two explanations as to why he resembles Godzilla, leaving the truth ambiguous. One is that when Mothra flew into space in Godzilla vs. Mothra, she carried Godzilla’s cells with her. They then mutated with a black hole and created him. Another is that he was born from Biollante’s spores released into the atmosphere. But that creates one hell of a plot hole! Since the timeline was altered and Godzilla wasn’t created until 1991, how can Biollante exist? Regardless, SpaceGodzilla isn’t the most interesting of monsters, and looks pretty silly, despite the attempt to depict him as menacing. 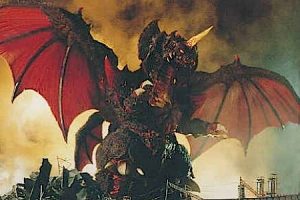 The “Heisei” era had been an extraordinary revival of Godzilla, but Toho decided to end the franchise for good. The story comes full circle, revisiting elements from the 1954 film, and ultimately kills off Godzilla. The announcement of Godzilla’s demise gained international publicity. The film marked the end of composer Akira Ifukube’s involvement with the series. Ifukube had been the composer for most of the films since 1954, and this was his last score before retirement. How fitting that he was there for Godzilla’s birth and death.

Godzilla’s radioactive heart threatens to have a meltdown, and once it reaches a critical temperature, it’ll explode and wipe out life on Earth. The past comes back to haunt Japan in this movie. If you recall, the original Godzilla was destroyed by the Oxygen Destroyer, which killed oxygen in water. Turns out the device’s effects mutated micro-organisms underwater, slowly transforming them into the monstrous Destoroyah. The use of the Oxygen Destroyer is a nice touch, and even in death, Dr. Serizawa’s legacy has consequences.

Megumi Okada appears for the last time as Miki Saegusa, and Momoko Kochi cameos as Emiko Yamane, from the 1954 film. Destoroyah is one of the most nightmarish Kaiju ever imagined, and his final form is very satanic in appearance. It is actually the military who win the day, killing Destoroyah with freeze guns, and then cool down Godzilla so he doesn’t explode. In a moving scene, accentuated by Akira Ifukube’s score, Godzilla slowly dies. This is an amazing film, and a fitting end for the King of the Monsters. But, Godzilla wasn’t going to be gone forever. The actions of TriStar determined that. 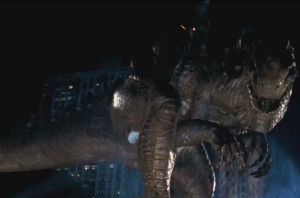 The infamous 1998 Godzilla film revived and killed the household name. And yet, it can be considered part of the official Godzilla canon so to speak. Roland Emmerich and Dean Devlin had little interest in trying to honour Godzilla as a characte. Patrick Tatapoulous was hired to re-imagine Godzilla as, well, a generic dinosaur. In fact, he’s not even a dinosaur, but a mutated iguana. When the designs were shown to Toho executives, they were met with stunned silence. Now, look, there’s nothing wrong with changing Godzilla’s appearance – but completely throwing out everything that made him iconic was just insulting. He has more in common with Jurassic Park than Godzilla, breeding asexually, producing baby Velociraptors, etc. There are times when the film mirrors The Lost World: Jurassic Park.

The marketing was relatively clever, hiding Godzilla’s appearance through an elaborate mystery, with three-hundred companies agreeing to the ruse. There is a peculiar number of cameos from the cast of The Simpsons. Roger Ebert and Gene Siskel are “honoured” with lookalikes appearing as the sleazy mayor and deputy mayor of New York. Charming. Emmerich seemed to use this film to insult his critics then tell a good story. The film was universally panned as expected. I enjoy Emmerich’s films, like Independence Day, but this one doesn’t really work.

And how did Toho react to it? They despised it. Still, they made TriStar’s Godzilla an actual Kaiju, renaming him “Zilla”. They actually made both this film and Zilla canon to the “Millennium” era. In Godzilla, Mothra, and King Ghidorah, the film’s events are mentioned, but dismissed as not being caused by Godzilla. Zilla himself, in gratuitous CGI, appears in Godzilla: Final Wars, only to be obliterated by his superior Japanese counterpart. The one good thing that came from this film was its sequel animated series, which has more in common with the Japanese franchise than the movie did.

Which is your favourite film from Godzilla’s second era? Is the 1998 film the worst Godzilla film, or can you think of others? Leave a comment below, or on our Twitter or Facebook feed.