Home » Guilt, Monsters and Difficulty in ‘Sprawling’: In Conversation with Here & There Writer Chris Sides 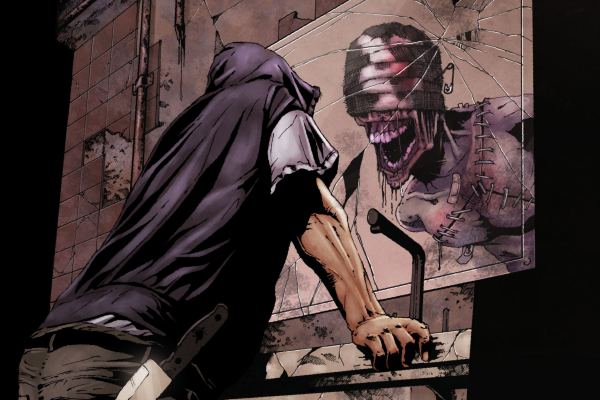 Chris Sides is a writer who’s established a trademark for himself with self-contained stories. Fresh off writing the one-shot thriller Close for Comichaus, his previous credentials include Impossible, Dark Matter, and a generous helping of short stories published in 100% Biodegradable and Sliced Quarterly.

Chris now turns his attentions to Kickstarter, for the first time, to raise funds for Here & There, a one-shot psychological horror. We caught up with Chris to discover more about the comic, and how he has big plans for this style of comic!

A Place To Hang Your Cape: What’s the inspiration behind Here & There?

Chris Sides: Here & There was originally a short 13 page story that artist Adam Jakes had written and illustrated. We met at NICE 2016, got chatting over emails and he showed me the story as an example of his latest work. I loved it, we were talking about it and the larger world of the book we’ve got now evolved out of those conversations. For Adam, Silent Hill was a huge inspiration; those kind of games and horror films that drip with dark atmospherics and a slow, creeping dread. For me, films like The Machinist and It Follows struck a chord; a sense of paranoia you can’t shake, that something’s there, constantly, be it a lurking sense of guilt or the monsters…

AP2HYC: There’s lots of ideas concentrated into the comic (loss, responsibility, etc), was it difficult packaging these into a one-shot?

Sides: Funnily enough, I’d written a horror graphic novel a good few years ago that never got off the ground and there were a ton of ideas and themes that I wanted to explore that translated really nicely to Here & There. I find it difficult to ‘sprawl’, I like the challenge of being able to fit a lot of meaty ideas into something that’s nicely contained. 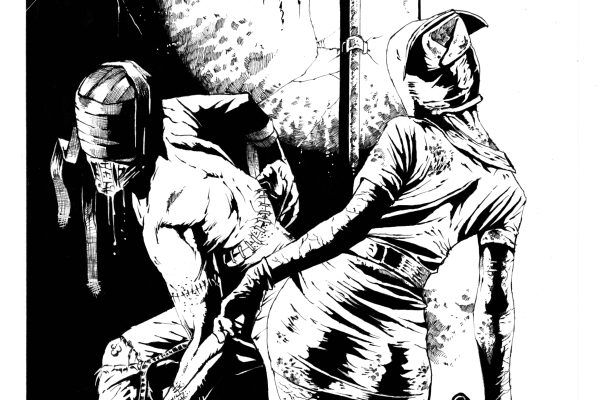 AP2HYC: Why make Here & There a one-shot?

Sides: Both Adam and I love the format – it’s self-contained, you don’t need a backstory and you don’t need to buy 20+ volumes to collect the whole story. You can get a lot of bang for your buck in a one-shot.

AP2HYC: You’re an experienced writer with many publications under your belt, but this is your first ‘solo’ Kickstarter. Why take it to this platform?

Sides: I’ve been toying with the idea of doing a Kickstarter for a while now and Here & There seemed to be the perfect project for it. We had a crack at pitching the project around, but one-shots can sometimes be a hard sell for publishers, I think, so bringing it to Kickstarter made a lot of sense. Plus, Ken Reynolds bullied me into it.

AP2HYC: How did Aljosa Tomic and Ken Reynolds join the project?

Sides: Ken’s been onboard very early on; he edited the script and agreed to the letters and design work. I’ve been lucky to work with Aljosa on a number of projects and he loves his horror, so he was the natural choice to pitch to when putting the team together! 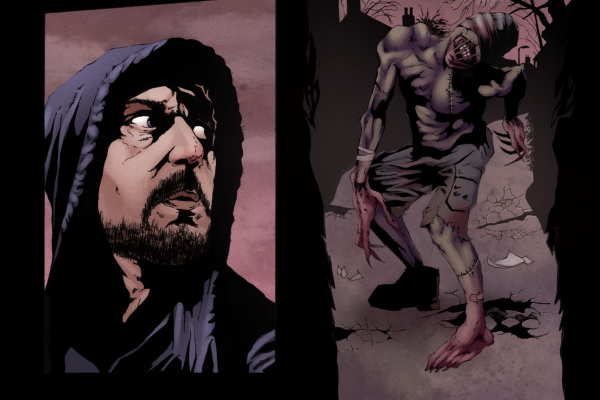 AP2HYC: You mention on the Kickstarter page that you hope to produce more comics in this style, what other projects might you be currently working on?

Sides: I’m scripting an action thriller one-shot for Paul Moore that we’re lining up for Comichaus, there’s a graphic novel – The Gunrunner, the next book in the Frostbyte universe – in production with Pete Woods, Liam O’Connor and Ken for Markosia and Adam and I have plans for something we’re really excited about that I’ll keep under my hat for the minute.

AP2HYC: You’ve already smashed the target on Kickstarter, what’s been the most rewarding thing for you to work on this project?

Sides: We’ve all been totally blown away by the response that H&T has had so far, people seem to have really dug the art, the monsters, the concept, all of which has made us super-enthused to get the book out there. We’re currently on 109 backers – that’s 109 people that have taken a punt on our little book, so we’re determined to give them something special.

You’ve only got until Sunday to back Here & There on Kickstarter! You can also discover more about Chris, Adam, Aljosa and Ken via their respective websites. Have you already backed Here & There? Let us know in the comments section or send us a Tweet!