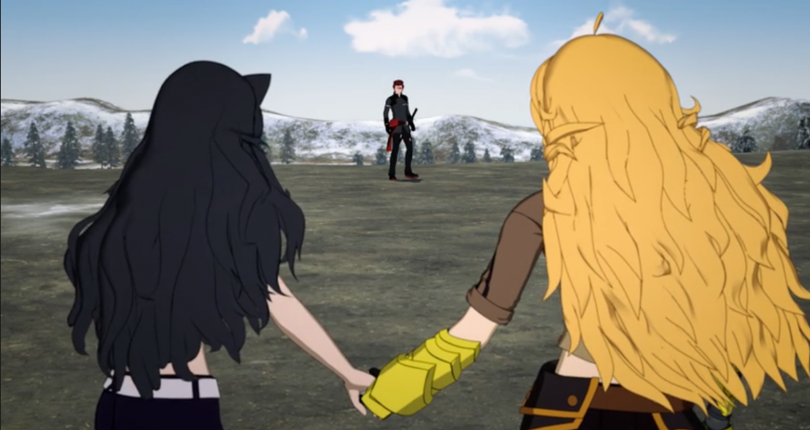 Though feeling short, “Seeing Red” is certainly one of the most nailbiting episodes of RWBY Volume 6. It is the penultimate episode of the volume, building up to a fantastic finale. Ruby tries to take down a gigantic mecha, whilst Blake and Yang continue their dramatic brawl with Adam.

The episode continues Team RWBY and Team JNPR’s battle with Commander Cordovin and her totally overblown mecha. As in, it is overkill to use it against a bunch of children, a drunk, and an old lady. But, Cordovin is extremely proud and egotistical, and won’t let anyone trounce her authority. It feels like Cordovin is a parody of uber-Americans who think they should arm themselves if their patriotism is insulted. Oscar finds a weakness in the mecha, realising they could blow up its cannon from within. And the only one who can take such a shot in Ruby.

Despite Qrow’s objections, Ruby hops onboard the getaway airship to perform the deed. Unfortunately, the first attempt fails when Ruby’s shot misses. Cordovin shoop-da-whoops the airship, causing it and Maria’s mechanical eyes to malfunction, leaving Oscar to try to pilot the plane. The airship crashes, but no one is harmed. With their transport to Atlas close to wrecked, Ruby decides a more diplomatic approach by giving one of her rousing speeches to Cordovin. Her words reflect the desperation and hard road she and her friends have endured throughout the volume.

Her speech also alludes to another ongoing theme of abuse of power in Volume 6. Cordovin has most definitely been flexing her power around, the mecha symbolising her ego. Adam has been abusing both Blake and Yang with his influence over them. Ozpin abused his “wise mentor” shtick with his lies and deceit. Team RWBY have even had to abuse their powers by attempting to illegally fly to Atlas. It just demonstrates the complexities of the human condition, and the great writing going on in this show.

Sadly, Ruby’s words fall on deaf ears, Cordovin opting for violence. Ruby jumps into the cannon to take the shot. Cordovin flinches, allowing Ruby to disable the cannon’s firing mechanism, grounding the crazy commander. Ruby has been such a badass this season.

Blake and Yang continue their dance of fists and fury with the ever repulsive Adam. Though last episode gave us a hint of reason to pity Adam, he still remains a cruel bigot. Hand-in-hand, the girls face their tormentor. Adam tries turning the tables to emotionally control Blake, depicting her as a person not to be trusted. The trio have their battle, though Blake is taken out the fight early when Adam smashes her into a wall, breaking her aura.

Our favourite blonde bombshell has a plan, seeing Blake scaling a cliff behind Adam and keeps his focus on her. Adam screams and rants like a douchebag you’d see being verbally crucified by Jeremy Kyle, and tries to kill Yang. Yang uses his similar Semblance against him, absorbing the blows he delivers to boost her strength and power. She then manages to snatch his sword, and delivers the most satisfying punch to Adam, before chucking his sword down the waterfall. Without his blade, Adam can’t use his Semblance.

Adam goes after his sword, but Blake blindsides him with swift uppercut. He spots Blake’s broken, discarded blades and goes after them. But, Blake and Yang beat him to it, and run him through from both sides with the weapons. Though it is a moment of triumph, the scene is also very grim and dire. There isn’t any celebrating on Blake or Yang’s part, nor do they attempt to finish him off and make a crude joke. Neither one of them wanted to hurt Adam, but the dumbass made such a persistent effort to attack them, that he gave them no choice. Yang even gave him an opportunity to leave last episode.

Adam’s apparent end doesn’t feel all that heroic or triumphant. Normally in similar TV shows and anime of this type, when a villain is defeated, it is a moment of joy, but not in RWBY. Adam stumbles away from Blake, falls to his knees, and takes an unpleasant fall to a watery grave. It is quiet, pathetic, and a little sad, yet also fitting for such a man. Though we didn’t really learn Adam’s backstory, whatever he experienced pushed him to become a spiteful, loveless, and controlling creature. The only place for him to go was to hit literal rock bottom. A part of me suspects we haven’t seen the last of Adam Taurus, but if he is dead, it concludes Blake and Yang’s personal journeys for now.

Blake breaks down into tears. While some might think this is strange, considering her tormentor is gone, it makes so much sense. At one time, Blake had feelings towards Adam, and mourns him to some extent. Yang comes to comfort her, Blake vowing to keep her promise to stay wither. This might be the first time that Blake has taken a life, as she is pretty shook up about it. This is also the first time Yang has taken a human life, so I suspect this will come back to haunt her in the future.

Meanwhile, while Cordovin rages at her defeat, she receives an alarming message over the intercom – an enormous army of Grimm is approaching Argus, led by a Godzilla-esque brute called a Leviathan. What fickle emotions we have. No wonder so many settlements across Remnant have been laid to waste by the Grimm. Just put an egomaniac in a giant robot and you’ve got an instant invasion on your hands.

The penultimate episode is certainly a zinger. Blazingly gripping, emotionally distressful, and we may have said bon voyage to another major character. My one complaint or nitpick is that Weiss hasn’t been given much to do during this dramatic battle. Come Volume 7, hopefully, that will change.

+ The conclusion of Blake, Yang, and Adam’s arc was a good one, and Adam’s death (if he is dead) was a fitting if pitiful one. I would’ve liked to see his backstory explored more, but it sufficed.

– Give Weiss more to do.