Home » Niche Formats & A Touch of Gundam: Creating The War of the Worlds Concertina Book with Lyndon White 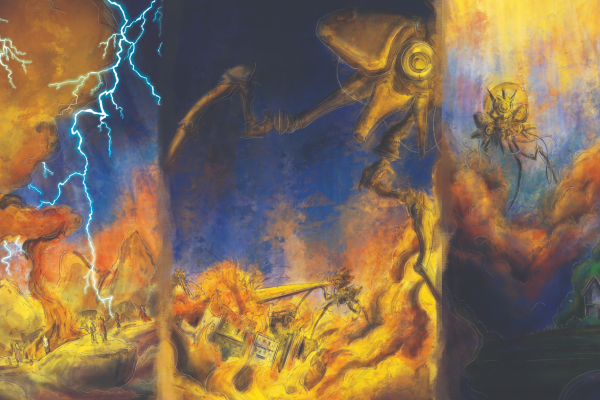 Artist/writer Lyndon White is no stranger in fashioning concertina books. With three of these accordion-esque comics under his belt already, he’s returning to Kickstarter to raise funds for his latest adaptation of a classic novel; The War of the Worlds.

Concertinas consist of a single page folded over numerous times. It’s a versatile art form, acting as an illustrative book or a single piece of artwork when unfolded. We caught up with Lyndon to learn more about his latest adventures in concertina form, and discover how a touch of Gundam can really liven things up when working on a project such as this.

A Place To Hang Your Cape: Why did you want to bring The War of the Worlds to life in Concertina form?

Lyndon White: There’s a lot of classic stories that I’d like to take a stab at and the work of H. G. Wells definitely falls into that. I’ve been lucky enough to have the support from Kickstarter backers and fans of my work, which gives me the opportunity to adapt these classic stories in the concertina format. Which to be frank, is a bit niche. However, people have been incredibly supportive and asked for classic story adaptations. A few of H. G. Wells’ stories were suggested and The War of the Worlds stuck with me as it was visually different to what I’ve done before.

As it stands, I’ve adapted Dracula (2017), Inferno (2017) and The Call of Cthulhu (2018). All have their own visual identity, yet with The War of the Worlds, I got to play around with scale. The martians (spoiler) invade Earth and build these gigantic tripod-like, war machines. Due to the size of the tripods, they dominate everything from a size perspective. Having them walk across the landscape, to dwarf houses, people, forests etc, is a really cool visual, for me at least.

From a technical illustration point, it was really fun to work with. With these concertina books, you have to tell a complete narrative through a series of 10 illustrations. Knowing that I’m going to be working with something that is always gigantic in scale, means I have to really plan and work that around the story. I can’t simple draw a gigantic tripod for 10 pages, as that would be boring and probably wouldn’t communicate the narrative of War of the Worlds. It’s all a balance.

AP2HYC: Are you a fan of the original book?

White: Very much so. I read it when I was a kid and there’s a few family members who are big fans. My dad and his generation got the musical version and he introduced it to me. My dad is the source of where my love of comics, horror, sci-fi, fantasy, etc, comes from. I think most people will have come across The War of the Worlds in one form of another, weather its the book, radio play, musical, films, spin-off novels or tv shows.

Whenever doing these types of projects I always go back to the source material, re-read it and make notes. It’s surprising what elements you forget and remember. There’s a few chapters dedicated to the narrator’s brother and his escape from London. Unfortunately, due to the concertina format, there wasn’t enough room for these scenes so they had to be cut.

AP2HYC: You’ve produced other concertina books before, were they good practice?

White: Bram Stroker’s Dracula was my first venture into the world of concertina books. From that book I “cracked the code” if you will, but you learn something each time you make a new book. While Dracula was my introduction, Inferno taught me what not to do. If anyone has read Dante’s Inferno, it’s a long-ass poem, written in Italian and then translated into old English (unless your sensible and buy the new English version). All of which is fine and digestible, but not always easy to do in a mere 10 pages. I chose to adapt Inferno as I love the story, but I had to really trim the story down and tell a very streamlined version of the poem. Since Inferno, I’ve been careful about which stories I’ll adapt. Adapting a longer story in the format is do-able, you just have to be willing to cut out a lot.

My third concertina, The Call of Cthulhu was based on a much shorter story and which is told through three chapters, which makes it perfect for the short form, concertina format. I am however, very careful to be passionate about these stories and to do them justice. There’s a lot of loyal, passionate readers out there, especially Lovecraft readers. If you mess it up, they will tell you.

AP2HYC: Visually, what was your process like in transferring the text into concertina form?

White: With any adaptation, I re-read the original text and make notes as I go. Writing down key scenes in a sentence and making a list. Once I’ve got my list, I choose the start, middle and end point. This is to make sure those key plot points are in order. Once those points are locked down, I narrow down which scenes are visual interesting and fit within the narrative. 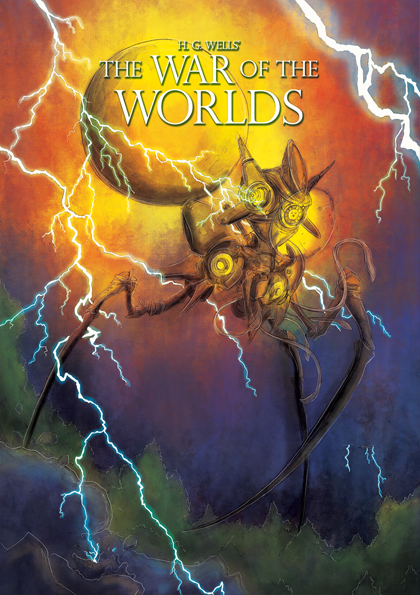 AP2HYC: The aliens from The War of the Worlds have been brought to life in many forms over the years, what did your process in putting your own spin on the creatures and their machines involve?

White: Due to the shorter format, I’ve focused on the tri-pods. We still see the falling star, the crater, the red weed etc, but physically showing the aliens had to be trimmed out.

Instead it’s all about the tri-pods and the war machines. I’ve kept the key elements, the ray-guns, the tentacles that pick up people, the poisonous black smoke, the three legs. The biggest change was the body of the machine. This is usually illustrated and described as a dome. The dome was included in some of my early drafts but it was very quickly becoming the same as what everyone else has done before. I decided to switch things up and go for a more mech-based approach. I’m a big fan of Gundam Wing, so you will see a few Gundam-esqu elements in the design. There’s a few different armour plates and small details that give the tripods more depth and a more interesting shape. All of which made them more complicated to draw, but it’s made them really visually interesting on the page.

A2PHYC: Has it been a fun project to work on so far?

White: Incredibly so. I’ve had a blast working with the tripod design and playing with the colour pallet. Each of these concertina books has their own thing going for them. They all work as a set, but individually have their own identity. I’ve gone all out with the colour pallet with War of the Worlds and even though at times it took longer to create, the visual of the lightning and fire in some of the backgrounds was really fun to paint.

These concertinas are smaller scale projects compared to the longer format books I’m currently working on. They need to be fun and enjoyable. It’s a balance and people do need to be asking for them, otherwise there’s no point. If I was just making these books for the sake of it, I wouldn’t be making them. I think it’s really important to enjoy the projects you choose to work on. Otherwise, not only will readers be able to pick up on it, you’ll probably not do a good job and you will be wasting your time.

Thankfully, I’ve had a couple of years now of working on projects I love. I’m really grateful. I’m glad I get to take a stab at one of these classic stories once a year.

You can pledge to White’s Kickstarter here! Let us know what you think in the comments below or send us your thoughts on Facebook or Twitter!