Home » Grief, The Exorcist and the Depths of Madness: In Conversation with Man of Sin Creator Andrew Guilde 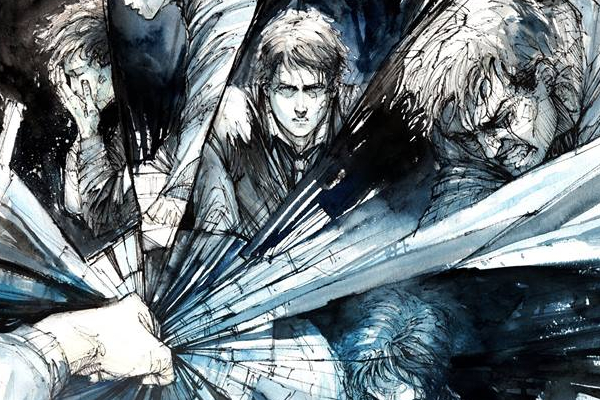 We were recently lucky enough to be granted a look at Andrew Guilde‘s and Camilio Ponce‘s horror/fantasy drama Man of Sin. An intensely immersive foray into the depths of madness, Man of Sin is visually stunning read that delivers a wonderfully creeping sense of dread throughout. With the comic currently crowdfunding on Kickstarter, we caught up with its writer and creator, Andrew, to discover more about the comic’s genesis.

A Place To Hang Your Cape: Why did you want to create Man of Sin?

Andrew Guilde: Without being too long winded here, Man of Sin came about due to some personal tragedy that I was faced a few years back. I lost two of the most important people in my life within months of each other when both my stepfather and grandfather passed. While I was grieving, what I began to notice was how my family members grieved and how it was different from my own. In essence, Man of Sin is a personal meditation on the dangers of allowing tragedy to consume us.

Around this same time, I happened to be watching one of those History channel programs where they get “experts” to talk about unsolved this or religious that. The one I was watching was about the Anti-Christ. These “experts” claimed that the Anti-Christ may already be walking among us with the ability to destroy the world. I thought about what it would take to want to destroy the world, and like that, the first seeds of Man of Sin were planted.

AP2HYC: You mention on the Kickstarter page that fans of The Exorcist and The Sandman will find much to enjoy about the comic. Were these inspirations for the comic itself?

Guilde: I grew up watching horror films with my mom, it’s something that we still enjoy together to this day. One of the films that she spoke a lot about when I was younger was The Exorcist, and how, when it was released, many thought it was one of the scariest things they’ve ever seen. So much so, that people fainted in the theatre and couldn’t finish the movie! Now that I’m older, I realise that a lot of was terrified people, and why that same level of fear can’t be recreated as easily today, is that it relies too heavily on religion.

What I mean by this is for The Exorcist to be truly terrifying, you need to have a firm understanding of Christian and Catholic theological beliefs. I mean this in the best possible way, but to a parent who is a devout Christian, one of the most terrifying things would be to lose your child to Satan, which is what the fear in The Exorcist is based on. Someone without this same belief structure won’t find The Exorcist that scary, and the whole concept probably doesn’t make a whole lot of sense. 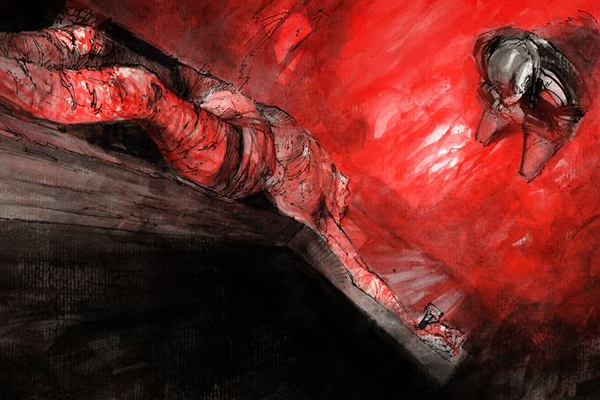 What I wanted with Man of Sin was to take that terror, that dread, of losing a loved one to something you can’t control, and take the religion out of it. Yes, there are some themes of religion in Man of Sin, but that’s just window dressing, you don’t need a foundation in Christian theology understand our protagonist, Damian Nero’s plight. I’m a big fan of Neon Genesis Evangelion, and I think they do this perfectly.

For The Sandman, that’s more of a nod to artist Camilo Ponce. I know he’s a huge fan of The Sandman and his work is influenced by it. That said, I feel like Man of Sin could be found right alongside The Sandman and other Vertigo-type titles that offer readers something other than what’s typically found on comic book stands. If a reader wants something outside of the tights and capes, Man of Sin is for them.

AP2HYC: Man of Sin bears that classic factor of the creeping horror throughout. How did you maintain the comic’s balance between horror and fantasy?

Guilde: One of the things I knew going into Man of Sin is that there isn’t any one visual that we could put on the page that would scare our readers. It’s too difficult in the medium and the day and age we live in. So those big, holy-sh*t-jump-out-of-the-seat moments that are common in most horror stories were out of the question. What we decide to do was make it more psychological, more visceral and surreal. This way we’re not looking to make you physically jump in fear, we’re trying to emotionally and psychologically scare you. To do this, we tried to balance deep character moments with the fantastical. This way the reader never truly knows what’s going on; they’re interested, invested, and connected in a way that traditional horror stories that rely on jumps to scare aren’t.

AP2HYC: Do you find the two genres complement each other well?

Guilde: Very much so, and I think Camilo is the perfect artist to blend them together. His artistic ability and range is amazing. There are really no words that I can write that do him any sort of justice. The genres are both about the limits and boundaries of humanity and what we as humans are truly capable. For horror, it’s about the nightmarish depths that we can sink into. The Walking Dead is not a hit because of the zombies, the examination of humanity when societal governance gets thrown out the window makes it a hit. Same with anything in the fantasy genre, they just do it a little different, instead of monsters, it’s fantastical beast and what not. We wanted to explore what happens when tragedy consumes someone, and thought these genres would allow us to the that in the most unique and honest way.

AP2HYC: Camilo Ponce brings a haunting style to Man of Sin. How did he join the project, and what’s it been like working with him?

Guilde: Like I stated before, words don’t do him enough justice. He’s simply amazing. I’m a huge fan of artist in general and when I’m bored I just search the internet for art. When I find any I like, I follow them. This is somewhat how we met. I had two other artists attached to Man of Sin when I began, but both of them didn’t pan out for separate reasons. So, I was looking for an artist and just asked around the internet if anyone wanted to work on this project, and Camilo answered. I was already a fan of his, so he needed no introduction. And we just clicked from the moment we exchanged emails. He just “got” what I was going for in Man of Sin.

One thing that I need to point out that shows just how talented Camilo is, is that besides changing to black and white for flashbacks, we didn’t originally speak about the colour pallet of the comic. Camilo understood that the best way to impact the reader emotionally was to rely on colour. I was just stunned when I got the first few pages back. Not just because of his artwork and uncanny storytelling ability, but he understood the mood and tone of the book and executed it flawlessly. It’s been an amazing experience, I could not have found a better collaborator. 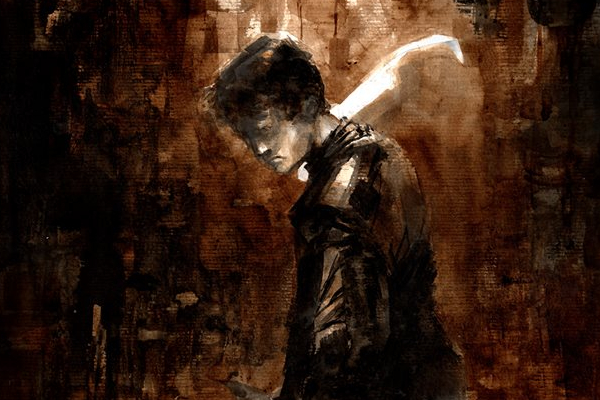 AP2HYC: What was the process like in creating the art itself? Did you have it in your mind how you wanted this comic to look?

Guilde: I try to get out of the way as much as possible and let Camilo do his thing. It’s for the best. One thing I truly believe in as a comic writer is that my main job is to inform and inspire my collaborators. Inform them of the direction of the book, the mood, tone, and all that jazz, and to inspire them, let them be the artist and create the best art possible. There is literally nothing I could write that would be half as good as what Camilo can put on the page.

That said, other than alternating between black and white and colour with our flashback scenes, I didn’t have any one way that I wanted Man of Sin to look. I knew how I wanted it to feel and how I wanted it to read. Then we talked about those things, and then the look of the book started to develop organically from there. We knew we wanted to be frantic and rushed in the opening pages, the book reflects this. We knew we wanted to slow down and meet Damian next, get the reader into his head, the book reflects that. So on, and so forth.

AP2HYC: Man of Sin makes liberal use of dynamic, warped perspectives. Why did you want to give the comic this distinct visual edge?

Guilde: It allows us to manipulate the reader’s emotions. Why do you think fast food chains are coloured the way that they are? They want their customers to feel a certain way. Get in, get out. Same with Man of Sin. We wanted our readers to feel invested in Damian, feel his sanity slip through his fingers, feel his decent into madness. In many ways, I think we accomplished this through Camilo’s visuals and Wes Locher’s letters.

One thing I knew when right away when Camilo came on as the artist is that his work will allows us to stand out on the comic shelf. Off the top of my head, I don’t know of one comic, right now, that’s visually like Man of Sin. Zero. I could be wrong, but this is just one of the many reasons why Camilo’s art deserves to be in everyone’s hand. Or at the very least, their coffee tables.

AP2HYC: What’s been the most rewarding thing for you about bringing Man of Sin to life?

The first one is the peoples’ reaction to our work. It’s been absolutely amazing. The fact that I can create anything that resonates with people is simultaneously humbling and rewarding. It’s because of the fans that this Kickstarter for the trade is happening. Unfortunately, Man of Sin’s publisher closed their doors before we could finish the series. If I wasn’t constantly asked, “when are you finishing the book?” I may have left the series unfinished.

The other is I’m expecting my first child later this year. I want to be able to look her in the eyes and tell her that she can do whatever she puts her mind to. I want to this book to be proof of that.

Will you be journeying into the insanity of Man of Sin on Kickstarter? Let us know in the comments section below or send us a Tweet!