Home » Heart of Steal #1 Builds Up a Heartfelt Adventure Romp 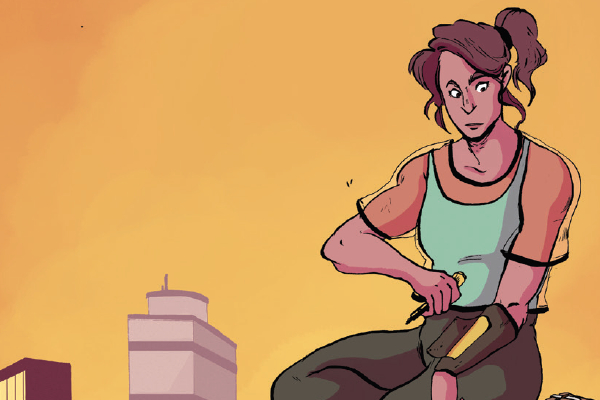 I’ll be honest, folks; Heart of Steal is the last comic I’d expect a writer of Fraser Campbell‘s style to produce. The mastermind of various gnarled, rugged tales of splendid hyper-violence including The Edge Off, Sleeping Dogs and Alex Automatic has stepped out of these trademarks to deliver a remarkably different sort of comic. Teaming up with artist Katie Fleming, colourist Rebecca Horner, letterer Hassan Otsmane-Elhaou and editor Harry French, this creative team have produced a debut issue that promises a warm, intimate, stripped-back sci-fi saga.

Released through Campell’s own imprint Cabal Comics, Heart of Steal, currently crowdfunding on Kickstarter, is a far cry from those other, aforementioned titles. There’s a lot of well-worn tropes on display in this first issue; rogue youth’s subverting their patriarchy to protect something nearest and dearest to them, other youth’s caught up in a problematic system of enforcement that governs the futuristic city they all live in. In the hands of Campbell and visualised chiefly by Fleming and Horner, these recognisable themes come together to form an affectionate, vibrant package. 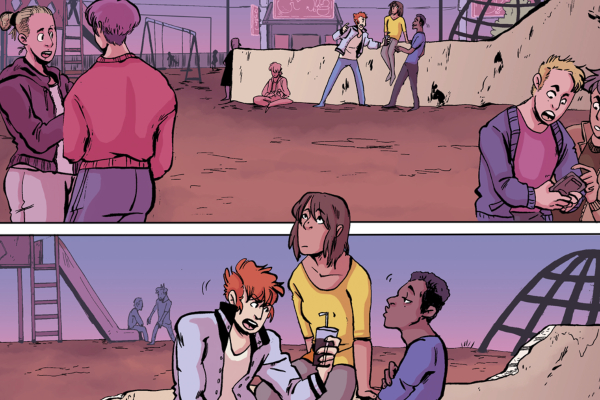 #1’s story is a light-footed read, quite literally. It slips into gear from the opening page and functions in all the right ways that a debut issue should, as we follow our runaway heroine Toni leaping from building to building, having stolen an advanced bio-techn item that sends her former friends, Michael and Oscar, (one a policeman and the other a gang member, but both part of the establishment Toni rallies against) on a blitzkrieg chase across Alpha City after her. Heart of Steal busily waxes lyrical about the notions of how our paths in life can lead us away from the people we care about, reflected in the rapidly unfolding events of this first issue. It’s pretty on-the-nose stuff, as themes go, but it’s executed with plenty of heartfelt elegance and lends a welcome emotional bed for the non-stop action to lie upon.

Elsewhere, Fleming’s art and Horner’s colours are a crisp, perfect match, not just for each other, but for Campbell’s nimble story-telling. There’s a hypnotic quality to Horner’s dark, melancholic colours and Fleming’s quirky, ragged shapes of characters and landscapes. This playful art balances well against the retrospective moods of the script. Campbell’s script slyly never quite slips into enveloping angst. It allows room for a quip and a joke here and there, but it’s spry atmosphere is cemented by Horner and Fleming’s visuals. 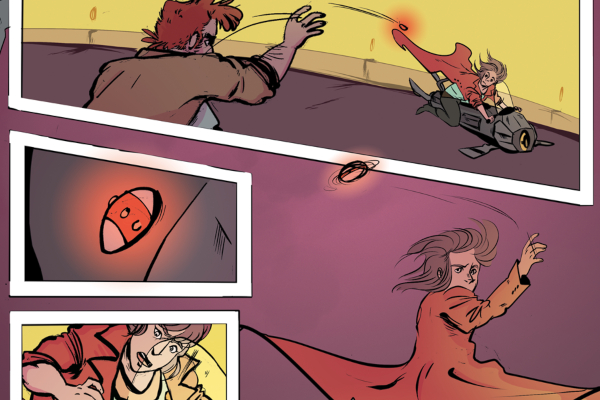 Beyond these deeper ideas, Horner and Fleming also work superbly well in kicking things up into a higher gear with the comic’s sense of adventure. Towards the issue’s end, there’s a rip-roaring chase sequence between Toni, Michael and Oscar on hoverbikes careering through the streets of Alpha City that’s enjoyably slick and hook-laden. It’s a near-wordless assault on the visual senses, with colour and shape thrown against each other into an enthralling climax of this first chapter. It’s all superb fun, and highlight’s the combined, focused efforts of all involved in the comic.

Heart of Steal may have a lot of familiar ideas going on, but it clearly has a lot of love for those ideas. In the introduction to the issue, Campbell relates how much of Heart of Steal‘s genesis came from wanting to produce a comic suitable for his teenage daughter to read. If #1 is anything to go by, Campbell and his creative team are well on their way in crafting a thoroughly delightful youth-driven tale of near-futuristic adventure that can be enjoyed by all.

Will you be backing Heart of Steal #1 on Kickstarter? Let us know in the comments section below or send us a Tweet!