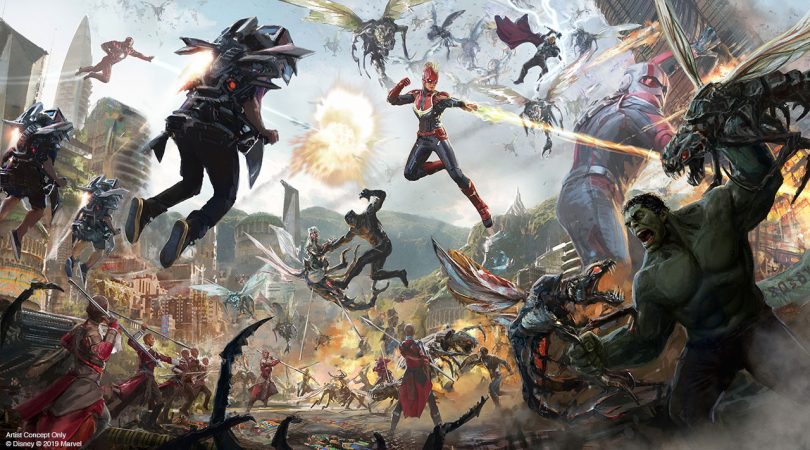 Marvel Comics have had an ongoing presence at theme parks worldwide, particularly in Universal Studios Orlando. But, now, after much anticipation, Disney’s first Marvel-themed lands were properly announced at this year’s D23 Expo. Reaching from California, to Paris, and Hong Kong, Avengers Campus takes place within the Marvel Cinematic Universe, carrying a shared storyline through new attractions and character experiences. So, what does Disney have in store for us dedicated Marvel and theme park fans? It’s time to delve in! 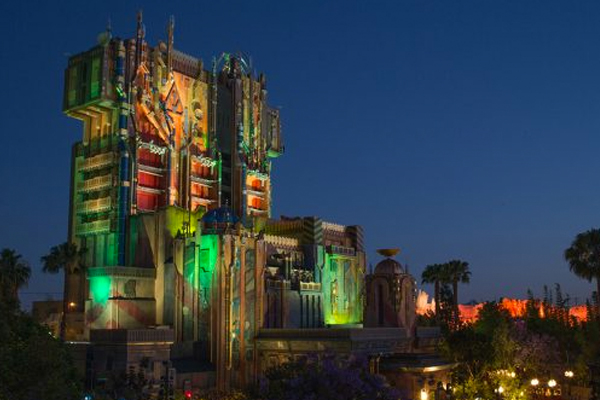 The first Disney-created Marvel attraction opened in Hong Kong Disneyland, setting the foundations for the future worldwide adventure. The Iron Man Experience is a simulator, based at a Stark Expo, where Tony Stark recruits guests to fend off a HYDRA invasion, using vehicles called the Iron Wings. A second attraction, Ant-Man and the Wasp: Nano Battle, takes place at the same Stark Expo, with our pint-sized heroes fighting off HYDRA and Arnim Zola.

Over in Disney California Adventure, the Twilight Zone Tower of Terror was transformed into Guardians of the Galaxy: Mission Breakout. The Collector has captured the Guardians, save Rocket, to add them to his prized collection. Rocket hires the guests attending to help bust out his friends and cause a little mischief. The attraction’s queue line involves plenty of easter eggs to Disney and Marvel, and each experience comes with a different tune from Peter Quill’s cassette player. Outside the attraction, guest will notice a promising Avengers-marked hatch in the ground – teasing at a very exciting new land: Avengers Campus. 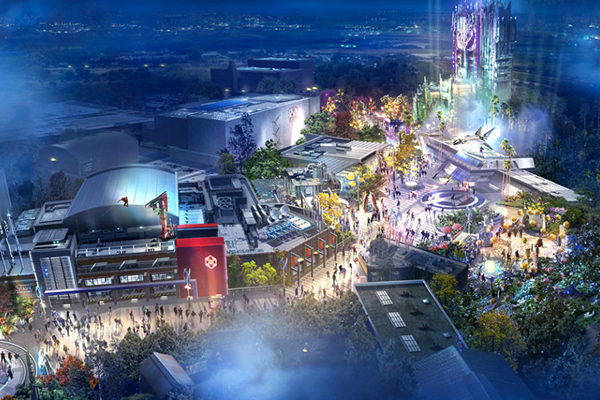 Though we all knew Marvel lands were coming to DCA, Disneyland Paris, and Hong Kong, it wasn’t until D23 2019 that some proper information was provided. Guests will be able to suit up alongside their favourite heroes at the Avengers Campus, which will open at DCA, Paris, and Hong Kong respectively in 2020, 2021, and 2023. What makes these lands sound so appealing is how they are all interconnected, sharing the same hanging story.

The HYDRA attack on Hong Kong’s Stark Expo is the trigger point for the world’s superheroes to come together and ensure the future is protected. Thus, they open the Avengers Campuses around the world, facilities to train the next generation of superheroes. That is where the guests come in. Each campus has been set up by the Avengers, Spider-Man, Doctor Strange, Captain Marvel, the Pyms, and the Guardians of the Galaxy. 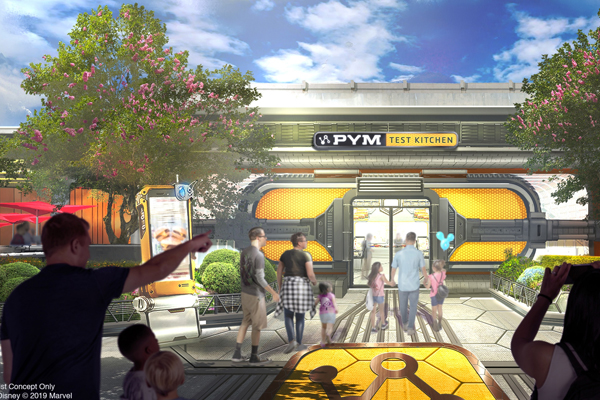 We have already covered Hong Kong, but we do know that an exclusive Avengers attractions will be built there in roughly five years time. For now, let’s go explore what will be coming to Paris and DCA. 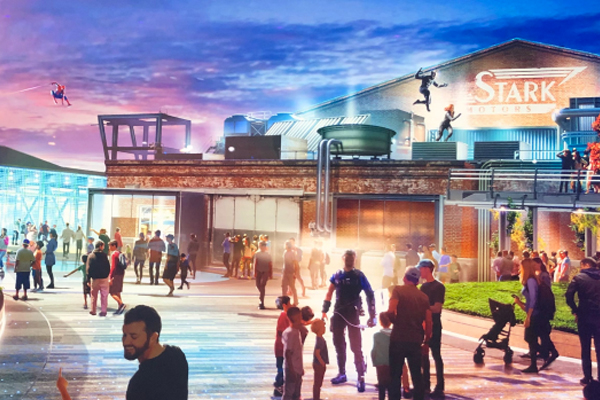 Disneyland Paris’ second gate, Walt Disney Studios Park, will be getting some much needed love, complete with a new lake, and lands based on Marvel, Frozen, and a clone ofStar Wars: Galaxy’s Edge. The Marvel land is slowly undergoing its transformation, appearing to be adopting the same Spider-Man attraction confirmed for DCA. A new Iron Man rollercoaster will be opened within the next couple of years, a rehash of the recently extinct Rock ‘n’ Rollercoaster. Presumably (and hopefully), this means Aerosmith will be replaced with AC/DC music!

An Ant-Man themed restaurant will replace the present restaurants in the Backlot area. That just leaves the Light, Motors, Action Stunt Show Spectacular. Concept art for its presumed replacement shows a Quinjet outside a new building. My initial theory was that the stunt show would remain, but would be re-themed to include the Avengers and S.H.I.E.L.D. However, it is likely that DCA’s upcoming Avengers attraction will be replicated here. Although Disney Imagineering claimed that each campus would be unique from each other, I am a little unconvinced. Disneyland Paris does often get the short end of the stick when it comes to attention. 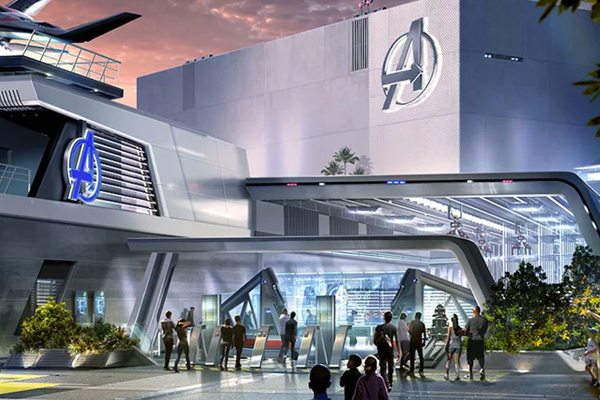 The American version of Avengers Campus replaces A Bug’s Land in Disney California Adventure. Firstly, guests will be introduced to the Worldwide Engineering Brigade (or W.E.B. for short), a program where young geniuses build technology to give ordinary people superpowers. 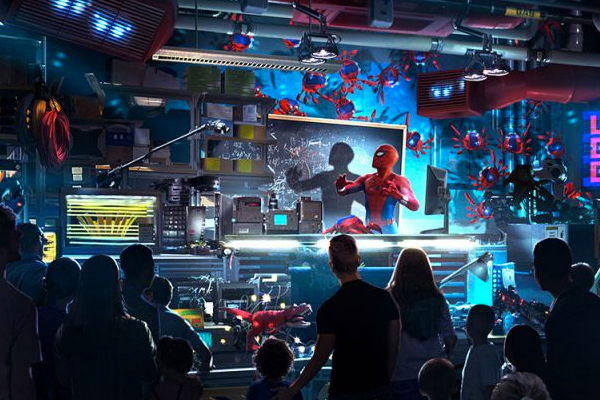 W.E.B. will be home to a Spider-Man attraction. Peter Parker is an inventor here, having created some cute, little spider-bots that he hopes to show off on W.E.B.’s open day. Unfortunately, the spider-bots start glitching and replicating, running amok across the campus. A test drive of the Webslinger vehicles, which allows guests to duplicate Spider-Man, will become a mission to stop the crazy spider-bots. I have no clue how this technology will work, but its sure to be amazing no less. 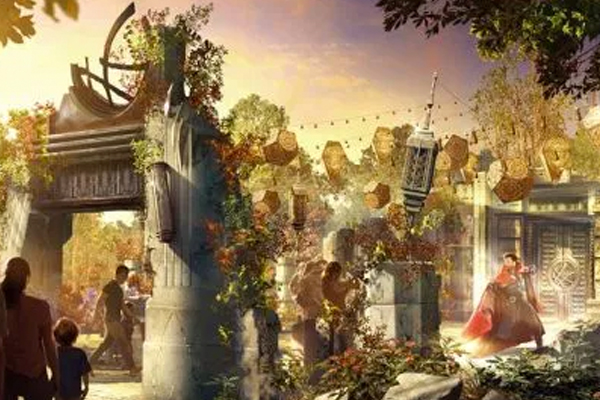 Doctor Strange appears to have an interactive outdoor attraction or show, where guests can learn the mystic arts, within the ruins of a mysterious Californian Sanctum. The Pym Test Kitchen is a restaurant or a min-brewery, where the food is larger than life. In a phase two for the land, a new E-ticket Avengers attraction will come along at a later date. Guests will aid the Avengers on a trip to Wakanda to battle a powerful new enemy. Concept art shows guests flying inside a Quinjet, and then appear to fly in jetpacks to team up with Earth’s Mightiest Heroes against giant bugs. Perhaps Flik and friends are getting their revenge for losing their land.

Guardians of the Galaxy: Cosmic Rewind 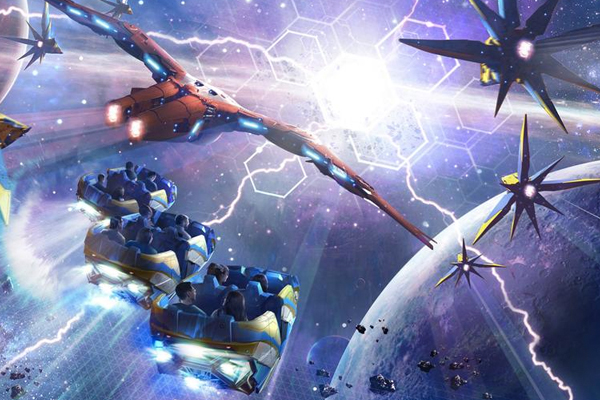 Our final stop on this tour is to the changing Epcot over in Walt Disney World. Due to Universal’s licensing deal, Disney can’t use a majority of Marvel’s character in Florida, but this doesn’t apply to the Guardians of the Galaxy and other formerly obscure heroes. Epcot is undergoing some dramatic changes to make it “more relevant” according to Bob Chapek (Chairman of Parks, Experiences and Products), incorporating many brands and characters to make the park more attractive.

Conflicting excitement and doubts aside, one new attraction will be the Guardians of the Galaxy: Cosmic Rewind rollercoaster. The attraction opens in a Xandarian outpost, where guests are invited to view Earth from space, but the Guardians will show up to take guests on a cosmic adventure. What makes this attraction unique is the including of a “storytelling” coaster which rotates to face where the action is. Oh, and it reverse launches into space! While it may seem that the Guardians of the Galaxy’s presence in Epcot is strange, there was a tie-in story to justify it. Turns out that Peter Quill visited Epcot as a child pre-abduction and returns to it for nostalgia’s sake.

With ten years of fantastic movies to take inspiration from, and Disney’s finest Imagineers on task, Avengers Campus is sure to be an incredible experience upon opening.

Are you excited for these marvelous new lands at the Disney theme parks? Which superheroes do you hope to meet, or see get their own attractions? Leave a comment below, or let us know on Twitter!