Home » The Strange History of Howard the Duck’s Trousers 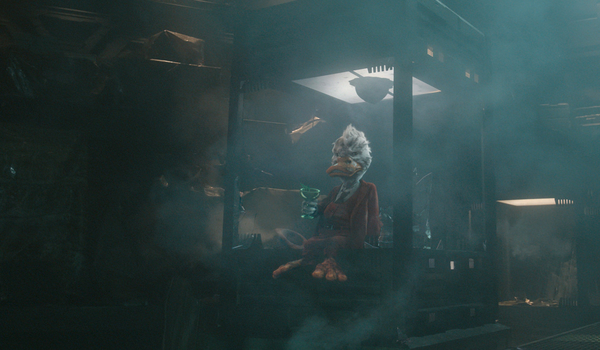 Prior to purchasing Marvel Comics, the Walt Disney Company had a strange history with this well known publishing corporation. This primarily revolves around the existence of Howard the Duck, a creation of Steve Gerber as a parody of the “funny animal” trope. With allegations of a lawsuit against Marvel back in the 1970s, Disney played a heavy-handed role in Howard the Duck’s brand recognition, influencing Marvel decades before anyone even thought of buying them. This leads to the strange tale of how Howard the Duck came to start wearing trousers.

Many years before cameoing in the likes of Guardians of the Galaxy, Howard was meant to be a joke character, created by Steve Gerber, a copywriter hired by Marvel in 1972. One of his first assignments was to write Adventure into Fear, featuring swamp monster, Man-Thing, who lives in the Florida Everglades. In the nineteenth issue, released in 1973, a demon named Thog tried merging all realities into one, bringing strange characters from other worlds together. Amongst these oddities was Howard the Duck, a snarky, cigar-chomping, talking duck from another world. Howard’s design was created by Gerber and artist Val Mayerik, as an affectionate parody to funny animal characters. 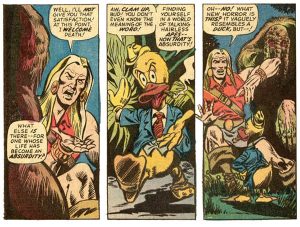 Marvel editor Roy Thomas disliked Howard, asking Gerber to be rid of him, finding it absurd that a talking duck should appear with the likes of campy, spandex-wearing superheroes. Suuuuree. Man-Thing went on to get his own comic book series, and Howard fell into an interdimensional void never to be seen again.. But, readers had taken a liking to Howard, and through fan-mail, asked for his return.

Howard would return in 1975 in his own comic book series, created by Gerber and artist Frank Brunner. Howard found himself in modern day Cleveland, Ohio, meeting Beverly Switzler, and fighting enemies such as Garko the Man Frog and Bessie the Vampire Hellcow. The comic proved to be popular despite Marvel deliberately printing only about 275,000 copies for a limited release. The comic book introduced more and more silly characters, but still had a sense of realism to it, avoiding Looney Tunes-style injuries and the like. Howard had a successful run, and at one point, the character even ran for the US presidency.

In 1978, Gerber was kicked off his own series after getting into a fight with Marvel over ownership rights. This led to one of the first highly publicised creator rights cases in American comic book history. The case dragged on for years, costing Gerber much money, and he was paying legal bills until his death in 2008. The end result appeared to end in an agreement, though Gerber never revealed the details publicly.

Howard’s background was expanded under other writers, revealing he came from Duckworld, a parallel world where ducks evolved instead of man. Howard’s comic book history would continue throughout the decades. And then, George Lucas produced the first major live action Marvel movie, based on Howard the Duck. We all know how well that went. Personally, I don’t feel Howard’s movie is as bad as commonly described. Granted, there are a lot of questionable moments to it, especially that near-bestiality scene. The Howard animatronic/puppet was good for the time, and Jeffrey Jones gave one hell of a memorable performance as the villain. 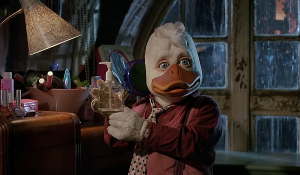 Another issue was how often Howard was being compared to Donald Duck. Both were talking, short-tempered ducks wearing no pants, and both had successful careers in comic books. Donald had his own huge sprawling world of characters, most created by the legendar Carl Barks. But, it was only a matter of time before the House of Mouse turned their head, and noticed a character allegedly parodying one of their most beloved stars.

Disney is known to be rather aggressive when it comes to protecting their copyright and “image”, to the point they sue daycare centres for having off-model Winnie the Pooh characters on the walls. Yes, really. The National Lampoon magazine featured a parody of Minnie Mouse, leading to Disney suing for $11 million which editor Matty Simmons planned in order to get the struggling Lampoon magazine some much needed publicity.

In the 1970s, Disney tried to maintain their aging, family friendly reputation in the years following Walt Disney’s death. They clashed with several counterculture artists, including the Air Pirates, who actually ignored Disney’s lawsuits to parody their characters in X-rated stories. During all of this, Howard the Duck was still going strong and was very popular with readers. Overseas comic distributors were becoming confused by Howard’s presence, unaware he had zero relation to Disney’s plethora of animated birds. Though not yet a huge conglomerate, and a fading beacon in Hollywood, Disney could still be a powerhouse in the courtroom. To Marvel, Disney looked like a mouse-earred Galactus compared to their small company.

Marvel’s editors didn’t even put up a defence against Disney, willingly allowing their future masters to drastically redesign Howard’s look to distinguish him from Donald. A Disney artist provided new model sheets for Howard, completely changing Howard’s appearance to avoid the need for a lawsuit. Granted, it saved a lot of time, money, and stress, but simply handing over the keys to your own kingdom to another company just sounds ridiculous. Then again, George Lucas did just that. Howard would have a more oval-shaped head, distinctive eyebrows, smaller eyes, made more yellow in colour, and more famously, a pair of trousers. 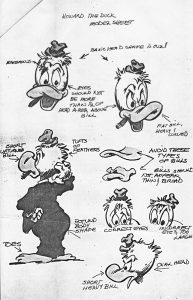 As you might guess, Steve Gerber was not pleased with the changes, as seen in his stories. In one story, Howard was pitted against a censorship terrorist group, S.O.O.F.I (“Save Our Offspring From Indecency”), who forces the character into wearing trousers, claiming ducks shouldn’t walk around half-naked. Marvel artists didn’t necessarily adhere to the rules laid out by Disney – who, at this point, had no legitimate, financial gain or influence in Marvel. Many people within Marvel mocked Disney’s redesign, finding it pointless and arbitrary. Disney became a bit more forceful, leading to a written agreement between the two companies to enforce Howard’s new look, or face potential lawsuits.

Gerber checked the legal department, discovering this written agreement, that in short, meant Marvel had to use the new design for Howard the Duck. Many assumed that this agreement was made via a handshake movement, though this wasn’t the case. Rumours and news were spun, creating the myth that Disney actually did sue Marvel to change Howard’s appearance. When it came to giving Howard a new short-lived series years later, Gerber suggested redesigning Howard as a mouse, though with the same personality. The series did not sell well, believed to be used as a statement by Gerber on his opinions of Disney’s changes years on.

Of course, Disney would eventually buy Marvel; Howard making a surprise appearance in a post-credits scene in Guardians of the Galaxy, with a tip of the hat to Steve Gerber and Val Mayerik, perhaps as a way of burying the hatchet. Howard would make another cameo in Guardians of the Galaxy: Vol. 2, and then be amongst those who would come to fight Thanos in Avengers: Endgame. Howard is just a part of the wackiness that is the Marvel Cinematic Universe, fully embraced by Marvel, Disney, and worldwide audiences alike. Rather fitting, considering how once Marvel editors found Howard to be a ridiculous character. Nowadays, one of Marvel’s biggest stars is Rocket Raccoon.

Most recently, it was announced that Howard would appear in a Hulu animated series, produced by Kevin Smith and Dave Willis. In a following special, Howard will form the Offenders, alongside MODOK, Hit-Monkey, Tigra, and Dazzler. It goes to show that despite imaginary lawsuits and preposterous trousers, Marvel’s sense of embracing their own silliness has changed for the better, and they have come to embrace their more peculiar characters. Recent appearances in the MCU and promise of a new animated series, make it clear that the future is bright for Howard the Duck. Him and his trousers.

Do you love Howard the Duck, or find him a silly creation? Which other bizarre Marvel characters deserve some more recognition? Leave a comment below, or give us a shout on Twitter.