Katie Fleming‘s loose yet buoyant artistic style gave Heart of Steal #1 a warm, playful edge to its YA sci-fi vibes. Now she’s teamed up with writer Chris Mole to embrace a more devilish style with her latest comic The Back Rubric. Currently crowdfunding on Kickstarter, we recently caught up with Mole to discover more about the one-shot and we also managed to have a chat with Fleming about how she joined the comic and what kind of style she’s injecting into The Black Rubric.

A Place To Hang Your Cape: What attracted you to working on The Black Rubric?

Katie Fleming: Chris approached me with a really cool idea and great script, I had a little experience with drawing characters performing and playing music before but never had that as the focus for the comic. So it was an exciting challenge to learn how to draw people playing instruments. Also the demons were super fun to design and draw.

AP2HYC: Does illustrating a spiritual black metal comedy break any new ground for you as an artist?

Fleming: Yeah it definitely does, as I said earlier I had a little bit of experience with depicting characters playing instruments, but Black Metal is its own sub genre of music, so I had to do a bit of research into how Black Metal musicians perform/act/dress etc. It was something really unique that I’m happy I got to work on!

AP2HYC: What kind of style would you say you give the comic?

Fleming: Hmmm, I would like to think a grungy monotone look that I think is different from my other work. Lots of fire, flames and special effects play a big part in the story too, so it was a book full of firsts for me. First concert, first audience splash page, first demon bursting through the gates of Hell, the usual! 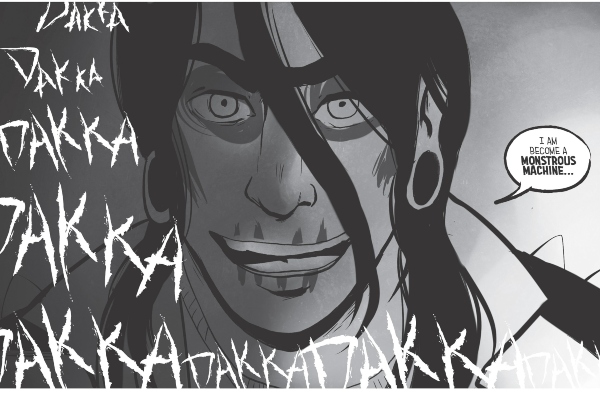 AP2HYC: Why illustrate the comic black and white?

Fleming: Chris brought up the idea to do it in black and white early on and it just made a ton of sense. Given the genre that both the comic and the band reside in, it just seemed to suit the book a lot more and give it it’s own distinct edge.

AP2HYC: Have there been any artistic inspirations for this title?

Fleming: I wouldn’t lie and say I didn’t watch a few episodes of Metalocalypse before starting to draw the book!

AP2HYC: How might The Black Rubric compare and contrast with your past comics?

Fleming: It’s a genre that I think even for me, I wouldn’t have seen myself doing. I used to listen to Heavy and Black Metal when I was a kid so the concept wasn’t completely alien, but I still had to brush up on some things. Regardless of the genre, Chris wrote a really great script that I really wanted to be part of and I’m so grateful he gave me the chance to do it! 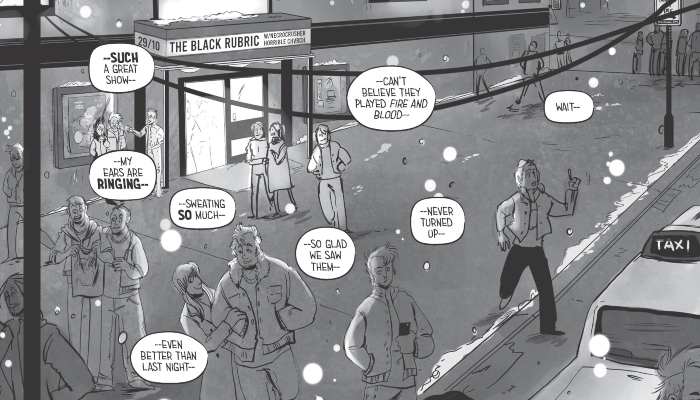 AP2HYC: Has it been a fun comic to draw to draw so far?

Fleming: Oh yeah, the characters are so fleshed out and three dimensional it was really easy for me to translate what Chris had come up with for each of them. Also, from a technical standpoint, it’s given me a chance to work on scenarios, backgrounds and elements that as an artist, you’re constantly trying to hone and perfect. There’s something exciting happening on every page so I never got bored at all making the book.

AP2HYC: Are there any other projects we can expect from you?

Fleming: A few! I returned to draw volume 4 of Ship Wrecked by Aaron Fever, which will be coming out soon, maybe mid-April? I also have a few comics in the pipeline that I would realllllly like to talk about but haven’t been ‘officially talked about’ yet, but they’re coming, I promise!

You can discover more of Fleming’s work via her website. Will you be venturing into the depths of Hell with The Black Rubric? Let us know in the comments section below or send us a Tweet!