Home » Cinematic Yet Complicated, Dr. Murder and the Island of Death is a Quirky Thrill

Combining an arresting, cinematic visual depth with philosophical musings and a firm yet gentle parody of super-villain tropes, Dr. Murder and the Island of Death‘s greatest strengths is its visually-driven sense of humour. Published last year as the debut title from Danish small press Backyard Barons and written, drawn and coloured by Emil Friis Ernst, Dr. Murder and the Island of Death asks some amusing questions about a super-villain’s worth, but doesn’t entirely have all of the answers. The titular Doctor Murder is a villain who looses his arch-nemesis, causing him to collapse into mental anguish as he proceeds to question the value of his existence without someone to fight against. What gives this comic a certain zest is its aesthetic. Set in the 1970s and illustrated and coloured like a James Bond film, the radiant exoticism of Ernst colours give Dr. Murder and the Island of Death a succulent flavour, coupled with the rugged, loose line art.

Doctor Murder may have it made, but his own attitude lets him down. He has the title, the island, the underground lair, the deadly laser beam. But he’s socially awkward and romantically inept. His henchmen start to leave him. Then he looses his classic monologue every villain is equipped with. The tipping point is when all-round good guy Johnny America abandons him, triggering his loss on reality. There’s a macabre playfulness to Ernst’s narrative, in that whilst Doctor Murder’s loss of his grip on the world around him is sad and unfortunate, his antagonistic awkwardness makes it impossible to empathise with him. After all, he is a super-villain. His inwardly-focused mentality drives the comic’s story to quite an explosive conclusion, literally. But amidst the chaos caused, Ernst crafts a deliberately unsalvageable character. 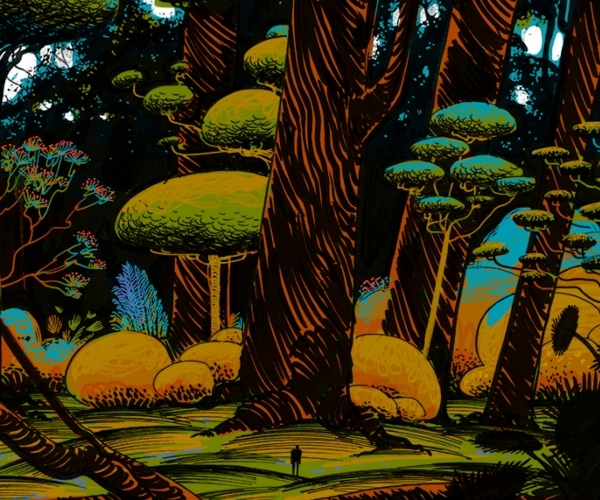 Doctor Murder is surrounded by far more better balanced individuals, heroic and villanous. But often, he fails to even notice they’re there. Ernst’s story-telling eventually shows how it becomes impossible for Doctor Murder to escape his own narcissism as his mental collapse worsens. The comic sets itself up for a final comment on the situation, a moment of inward realisation for Doctor Murder as attempts are made by other characters to educate him in empathy, but it never comes. Doctor Murder is so far gone that he can’t comprehend such a concept. The dissolution here adds to the quirky charm of the comic, but also feels unresolved, narratively, as if we just give up on the character and leave him to his fate. It reads like a journey without a destination.

Visually, Ernst doesn’t colour Dr. Murder and the Island of Death – he bakes it. A lush collection of warm, flavorsome colours populate the comic, adhering to the strong retro vibes. Even when its narrative themes are quirky and complicated to unbox, it’s a gorgeous comic to at least look at. Beyond the colours and line art, the very presentation of Dr Murder and the Island of Death makes it a deliciously eye-catching affair. Ernst embraces those James Bond vibes further by framing the comic like a movie, with its scenes playing out in a cinematic scope, boulstered by the sumptuous art and colours. So much of the story is quite active – chase sequences between heroes and villains, car journeys from one villain’s base to another, trekking across oceans. It’s arguably here that Ernst is at his strongest as an illustrator, as everything feels naturally in motion. It’s a comic that looks alive.

Dr. Murder and the Island of Death is ultimately written drawn, coloured and framed like an experimental superhero film nobody was meant to see. Its offbeat moral and philosophical themes don’t feel as creatively successful as they mean to be, leaving Doctor Murder’s character development feeling like it’s pulled in unexpected directions, as if to maintain that sense of absurdity for the sake of maintaining the comic’s overall odd flavour. Whilst Dr. Murder and the Island of Death does become rather obscure in its message, it remains a camp, pulpy, witty and visually engrossing exploration of a super-villain’s value.

You can journey into Doctor Murder’s madness via Backyard Barons. Have you already done so? Let us know in the comments section below or send us a Tweet!