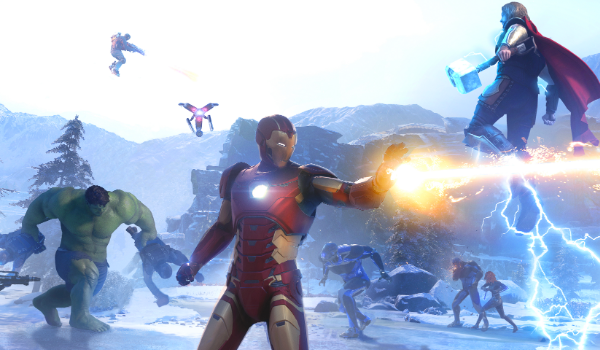 Square Enix and Crystal Dynamics’ new Avengers game has finally released, to what seems to be a rather mixed reaction. I personally have been checking out some of the reviews for this game and I’ve found quite a few people praising what others disliked, and vice-versa. Overall, I’ve found the general reaction of the game to be fairly lukewarm. Well, after putting in 30+ hours in the world of Marvel’s Avengers, it’s time to throw my hat into the ring of Avengers critiques.

The story of Marvel’s Avengers is where you’ll likely find most of your enjoyment. The game begins with the Avengers separating after a traumatic event (A-Day), and the story follows a new Inhuman hero, Kamala Khan, in her efforts to reunite the team and defeat the evil organization, AIM. The story has some great moments between the characters, and Kamala serves as a good protagonist and POV character, but overall it is rather predictable and very short. While playing through the story I never really found myself either surprised or feeling particularly excited at any point, as everything kind of just plays out as you expect it to (it doesn’t help that some of the cooler moments, like Thor’s return, were already shown in the gameplay trailers and showcases, and as such had less of an impact). The story’s  main antagonist does what he needs to do as a villain, but really isn’t particularly imposing or sympathetic. The voice actors deliver great performances though, and are able to make those special moments between the Avengers feel earnest and compelling.

The story as a whole also suffers from brevity. I’m fine with the kind of slower burn to get to assembling the team, but there really isn’t much story left after the reunion, and I really would’ve preferred to spend much more time with the characters. Each Avenger has their own issues after their disbanding, and I would’ve liked to have seen a bit more about how certain Avengers were dealing with some of the events that happened during A-Day. It also would have been cool to see more marvel super-villains (there are only three in the story) and some more variety in the campaign missions. You spend most of your time in the campaign fighting waves of robots in AIM bunkers or in the desert, with only  a couple story missions having a more unique premise or environment. The story in Marvel’s Avengers is good, but neither delivers the epic-ness in scope of Marvel Ultimate Alliance, nor fully provides the emotional investment and moments of Marvel’s Spider-Man.

The combat overall can be very fun, but it somewhat suffers from the type of game it is. All characters have essentially the same base movesets, all with light, heavy and ranged attacks, a defensive power, and three supermoves. Each character feels different in combat, with Hulk feeling much heavier and slower compared to Iron Man, who doesn’t really have the melee abilities of Captain America. This difference grows the more you progress on the character skill trees and unlock more character abilities for your character to use.

The issue is that while the characters all feel different, you often don’t get to feel like the characters, especially with the stronger characters like Thor and Hulk. The issue with Thor and Hulk is that you would expect them to be significantly more physically powerful than the others, like you should be able to defeat the basic underlings in a single blow, but the nature of this game can have these characters feeling severely underpowered a lot of the time. You’re Hulk could be throwing boulders and punches like there’s no tomorrow, but if you have too low a level (and if you’re trying to level up, you’ll probably do the harder missions), your punches feel entirely insignificant.

This game really suffers from a jack-of-all-trades-master-of-none approach, in that all the characters generally feel pretty good and play as expected, but you don’t really get to immerse yourself into the characters as much as you have in some of their solo ventures. That isn’t to say the combat isn’t exciting, it can be quite exhilarating to do a Captain America push-kick, or throw Mjolnir  at someone and watch them squirm under the weight of it. The benefit of this combat system is that it seems especially designed for the addition of more DLC characters, which is also an exciting prospect. I also think characters like Black Panther and Hawkeye will be extremely fun to play as. Overall the combat in this game is fun, but is not as satisfying or immersive as the Batman Arkham series or Spider-Man.

The real issue of this gameplay that I am finding is that there is not nearly enough variety in the post game content to keep me really interested. After finishing the campaign the game continues you into playing the post-story that just consists of playing through mission ladders and collecting faction points. The issue is that, currently, all the post-story missions are largely the same: you go to an area you’ve already seen in the story and do one of four activities a couple of times. Aside from a few interesting character-centric ladders, this is pretty much entirely what you will do to grind for gear or levels, and it gets stale rather quickly. The repetition and lack of any narrative weight just makes the missions hard to be engaged with. While I still had fun with the combat, I started feeling the slog rather quickly, and honestly after I get all the level 50 suits I want, I don’t really have much motivation to continue to play the game in anything other than short spurts until the DLC comes out.

Finally, one major gameplay problem that I have encountered at this stage is just the sheer amount of the bugs. Upon starting the game I found the opening cinematic to be very choppy, likely because the game is downloading content. While playing the game I found issues like allies teleporting through floors, enemies spawning late, lipsync issues, no audio in cutscenes, duplicate characters in the Quinjet, loot chest not being openable, and whatever is going on with Captain America’s face. There are also noticeable framerate drops whenever you start taking on large numbers of enemies, which happens a lot. While these are all annoying in their own right, there are also issues with claiming rewards, which is really demotivating. I have found that many of my unlocked suits have gone back to being lost, the suit pattern chips not yielding anything, and the challenge cards either not giving points or not being reset. From what I’ve heard the devs are hard at work fixing these issues, and patches should be coming out soon to fix the various bugs.

Marvel’s Avengers is a live-service game, which means that there will seemingly be a lot of content coming out within the next months, and maybe even years. Honestly, this is what I find most exciting about the game, as while I find the game to be pretty good right now, the prospect of being able to play this game with a greater number of Avengers against a more diverse cast of villains and locations is really getting me excited. Another good thing is that all the future DLC content will be released for free (though the challenge cards for all future characters will be 1000 credits each). This also means that aside from unit sales, the game and DLC content  will be financed by the microtransactions in the game, and honestly the prices they have on the cosmetics seem very high. A single legendary costume costs $14, with the cheapest costume purchasable still being $7. You are still able to get suits for free in the game, though most in-game suits are just recolors, with there really only being four or five unique models per character. Only the cosmetics are purchasable, though, so all players will get the upcoming DLC additions for free (aside from Spider-Man, only Playstation users get him).

To wrap it up, Marvel’s Avengers is a solid game with a good story and gameplay, but doesn’t really meet the levels of the Batman Arkham games or Marvel’s Spider-Man. I think the main draw is its promise of future content featuring many more characters from the Marvel Universe. Currently though, I wouldn’t say this is a game must-buy right away, as you might find yourself enjoying the game more when the price has dropped, the bugs are fixed, and the content has grown.

What do you think of Marvel’s Avengers? Sound off in the comments or send us your thoughts on Twitter!