The quirky, deadpan diversity that makes up your standard Fred Egg Comic bleeds from one comic to the other with such frequency that it can be difficult at times to distinguish one comic from the other. David Robertson‘s prolific output of DIY anthologies capture an abundance of moods and styles, and whilst Wow! Retracted is, on the surface, an average comic of his, it finds strength in how robust its material is. Wow! Retracted is one of several of Robertson’s comics where his own strips bookend a collection of other comics written by himself but illustrated by different artists. Whilst Break the Cake showed that method wasn’t entirely creatively successful, Wow! Retracted has more bite and wit throughout.

Robertson’s best self-penned and self-drawn offerings come early on in the comic. The 12-page opening strip Nando is sparse and downbeat. A pair of survivors of a crashed passenger jet in an undisclosed snow-covered mountain region contemplate their mortality and their closeness to God as death and insanity creeps nearer to them. Robertson’s nimble approach to illustrating his strips with a skeletal amount of detail lends Nando a desolate atmosphere, emphasised by the cold colours. At the other end of the spectrum, Ink Drive is classic Fred Egg Comics. With its bizarre sense of humour and ability to find the surreal in the mundane, it’s a strip that captures Fred Egg Comics at its most distinctive. 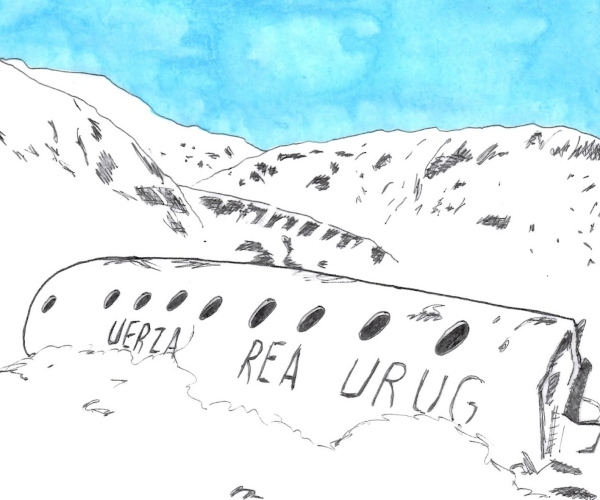 Most of the strips contributed by other artists run for one page each, and these different artists capture different angles to Robertson’s distinctive storytelling. Rebecca Horner‘s Visual Music captures a thick, swirling mass of sound represented in a bold, blocky form that catches the eye. Pam Wye‘s Graffiti Wall is ragged in its claustraphobia in just four panels. Olivia Hicks‘ ASS/U/ME marries Robertson’s trademark humour involving anthropomorphic animals discussing the values of not being prejudice with sharp yet muted line art and inks that adds some subtle detail to the characters, helping to reinforce the humour.

Wow! Retracted is an enjoyably strong outing for Robertson’s surreal brand of comics. It hits all of the same notes as his other comics published under the Fred Egg Comics and establishes routes that his more recent output would follow (Break the Cake, But a Dream, Bell Time). There’s a firm editorial grip on the different artist’s contributions, with each artist in sync with Robertson’s unpredictable narratives, all helping to make Wow! Retracted a stand-out entry in an already diverse catalogue of pleasingly odd comics.

You can discover more about Wow! Retracted from Fred Egg Comics. Are you a fan of Robertson’s small press titles? Let us know in the comments section below or send us a Tweet!